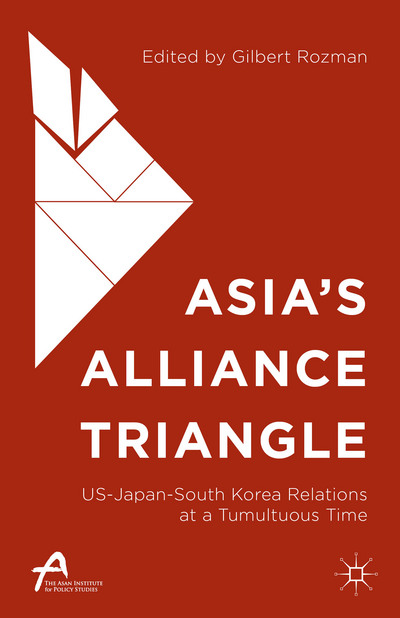 Please click on this link to register for this event.

The Asan Institute for Policy Studies will host the Asan Book Launch of Asia’s Alliance Triangle (Palgrave 2015) edited by Dr. Gilbert Rozman on Friday, December 18, 2015 in Washington, D.C. Since 2013, the U.S.-led alliance triangle with Japan and South Korea has defied expectations. Drawing together articles commissioned from leading experts in all three countries by the online journal The Asan Forum, this book reconsiders what we thought we knew about the three legs of this triangle. Varied chapters cover the U.S.-South Korea alliance at 60 years, Japan-South Korea relations under stress, Japan’s national security policy, U.S. relations with both allies, and Japanese and Korean national identities. A picture emerges of two strong U.S. alliances increasingly at odds with each other, and of Japan-South Korea relations newly troubled not only by intensifying national identities but also by divergent strategic calculations. This volume shows how vital this triangle is to understanding U.S. policy in Asia by bringing to light the dynamics of triangularity in the shadow of China’s rise and the North Korean threat.

* To purchase a copy of Asia’s Alliance Triangle, follow this link.

Gilbert Rozman taught at Princeton University from 1970 to 2013. He now serves as the editor of The Asan Forum, an online journal on the international relations of the Asia-Pacific region. His writings bridge sociology, history, and political science, concentrating on the states of Northeast Asia.

Choi Kang is the Vice President for Research and the Director of the Center for Foreign Policy and National Security at the Asan Institute for Policy Studies. Previously, he was the Dean of Planning and Assessment at the Korean National Diplomatic Academy, Professor and Director General for American Studies at the Institute for Foreign Affairs and National Security, Research Fellow at the Korea Institute for Defense Analyses, and Senior Director for Policy Planning and Coordination on the National Security Council Secretariat. Dr. Choi was also a South Korean delegate to the Four-Party Talks. Dr. Choi writes extensively on the ROK-US alliance, North Korean military affairs, inter-Korean relations, crisis management, and multilateral security cooperation. He received his B.A. from Kyung Hee University, M.A. from the University of Wisconsin-Madison, and his Ph.D. in Political Science from the Ohio State University.

Sheila A. Smith, an expert on Japanese politics and foreign policy, is senior fellow for Japan studies at the Council on Foreign Relations (CFR). She is the author of Intimate Rivals: Japanese Domestic Politics and a Rising China (Columbia University Press, 2015) and Japan’s New Politics and the U.S.-Japan Alliance (Council on Foreign Relations, June 2014). Her current research focuses on how geostrategic change in Asia is shaping Japan’s strategic choices. In the fall of 2014, Smith began a project on Northeast Asian Nationalisms and Alliance Management.