On Apr 3, the South Korean government announced its plan to open up parts of the DMZ for public use by the end of April. The so-called “DMZ Peace Trail” spreads over 42 km along the regions of Goseong, Cheorwon, and Paju. The arrangement is part of the Sept 19 confidence-building agreement. The two sides have already demolished numerous guard posts in the area; however, the peace trail has yet to be approved by the UN Command.[1] Security problems and lack of adequate safety assessment have also been called into question.

On Apr 4, local media outlets reported that a South Korean vessel named Pioneer delivered 4,320 tonnes of diesel fuel to North Korea in 2017.[2] An unspecified US intelligence agency relayed the information to South Korea and the authorities detained the ship after confirming this information. The case was later handed over to the prosecutor’s office. Another South Korean vessel named Lunis is alleged to have carried 165,400 tonnes of refined petroleum products to North Korea. Lunis entered the port of Yeosu on Mar 3, but no action was taken by the South Korean authorities. Observers expressed concern about continuing sanctions evasion by South Korean ships which would not only undermine the pressure campaign against North Korea but also the raise questions about the role of current South Korean administration.[3]

During Mar 25-27, the National Assembly held hearings on the nominees for seven ministerial positions. A large majority of the National Assembly opposed a number of current nominees. Nominations for Cho Dong-ho (Ministry of Science and ICT) and Choi Jeong-ho (Ministry of Land, Infrastructure, and Transport) were withdrawn amid intense pressure.[4] The Blue House has stated that it will move ahead with the appointment of five remaining nominees. But the government’s failure to properly vet these nominees came under severe criticism. The opposition parties also called for the resignation of Cho Guk (Senior Presidential Secretary for Civil Affairs) and Cho Hyun-ok (Secretary for Personnel Affairs). Blue House spokesperson Kim Eui-kyeom was also embroiled in a real estate scandal only to resign amid growing public outcry.[5]

On Apr 3, electorates in Gyeongsang and South Jeolla Provinces held several local by-elections for two parliamentary seats and three local councilor posts. In particular, there was a considerable amount of attention on the two parliamentary seats in Changwon-Seongsan and Tongyeong-Goseong of the South Gyeongsang Province because many observers saw this election as a precursor to next year’s general election. Both the conservative Liberty Korea Party and Justice Party split Tongyeong and Changwon, respectively.[6] Some analysts interpreted this result as an indication of dwindling support for the ruling party. Incidentally, President Moon’s approval rating dropped to the lowest point of his presidency. 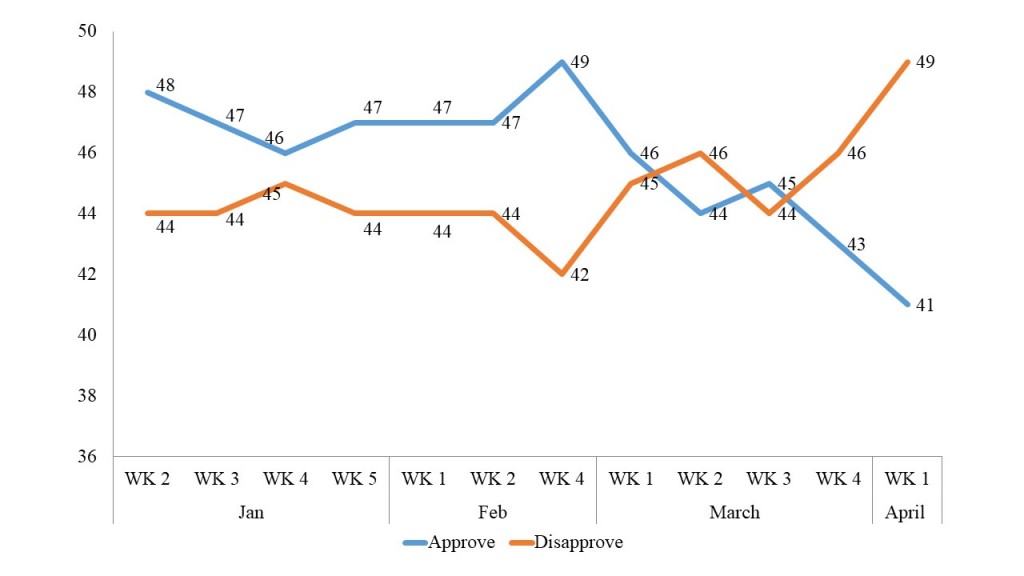 On Mar 26, the Japanese Ministry of Education, Culture, Sports, Science, and Technology (MEXT) approved 10 elementary school textbooks in which Dokdo is described as a Japanese territory illegally occupied by South Korea. In response, South Korea’s Vice Foreign Minister Lee Tae-ho summoned Japanese Ambassador Yasumasa Nagamine to lodge a complaint. According to the South Korean Ministry of Foreign Affairs spokesperson, ROK MOFA condemns the authorization of these textbooks and demands an immediate withdrawal.[10]

Busan and the Korea-ASEAN Summit

On Mar 1, South Korea’s presidential office announced that Busan will host the Korea-ASEAN special summit during Nov 24~26 of this year. The Blue House also stated that the government is mulling to invite North Korean leader Kim Jong-un to the summit.[11]

South Korea’s gross national debt reached a record KRW 1,682 trillion in 2018, KRW 126.9 trillion more than the previous year. Much of the increase in the country’s national debt was largely due to rising pension payouts for civil servants and veterans (KRW 94.1 trillion) as well as KRW 21.7 trillion in bonds issued by the government.[12]

South Korea rolled out the world’s first commercial 5G mobile services. The country’s three major mobile carriers (SK Telecom Co., KT Corporation, and LG U Plus Corp) commercialized 5G services at 11 pm local time on April 3. Being alarmed by U.S. carrier Verizon’s sudden change of plan from April 11 to April 4, they changed the initial plan to start their 5G services from April 5 to April 3 in an attempt to win the title of the “world first.”[13]