Kim Jong-un is the formal leader of North Korea, and the apparent leader of the Kim Family Regime. This regime is a brutal, barbaric regime that abuses human rights to stay in power, has guided its country’s economy into near failure, and employs propaganda in an attempt to deny the regime’s misbehavior and the failing nature of the state. But outside information is gradually penetrating the regime’s barriers, endangering this corrupt regime.

Will the Kim Family Regime and the North Korean state be viable in the long-term? Realistically, we just don’t know. North Korea purposefully tries to deny the world most information on the status of the regime and the country. We have no model of state failure, and even if we did, we would lack much of the data on North Korea needed to determine outcomes.

But consider the fate of East Germany when viewed from the mid-1980s. While western experts had considerably more information on East Germany, few if any predicted the timing of the precipitous decline and fall of East Germany and the resulting German unification. A major problem with such situations is that unexpected events—often events where the timing is impossible to predict—can radically change the course of a nation.

Consider the possibilities for North Korea suggested in Figure 1. Kim Jong-un could still live for decades; if he does, and maintains control of the North, the current regime could continue, condemning North Korea to a barbaric and impoverished future. 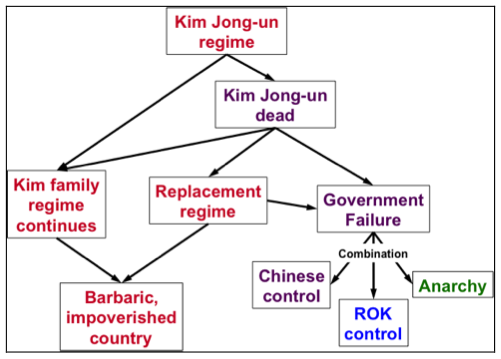 But Kim Jong-un could also be assassinated or otherwise die—and it could happen next month, next year, or ten or more years from now. The timing of such an event is impossible to predict; indeed, there may be several assassination attempts, and it will be impossible to predict which, if any, would succeed. If an assassination succeeds, some other member of the Kim family could take over and sustain the Kim Family Regime, or someone from the military or security services could take over, replacing the Kim Family Regime; in either case, the North would almost certainly remain barbaric and impoverished. But most likely, the disappearance of Kim Jong-un will leave multiple candidates for succession who will divide the North Korean military and security services into factions, causing the central government to fail as they divide into geographical areas of control. Indeed, even a replacement regime could fail and fall into government failure.

North Korean government failure would likely develop into a humanitarian disaster across North Korea. Already short of food, medicine, and other critical items, North Korea could experience hoarding that would further reduce the inadequate supply. In turn, the various factions would likely fight for the available—inadequate—resources, creating a civil war. Eventually, the ROK/United States would be forced to intervene for humanitarian reasons, and also to deal with refugees and likely a spillover of the civil war across the demilitarized zone. China would also likely intervene to deal with refugees and to avoid US influence within 100 kilometers or so of the Chinese border. Hopefully, the ROK would gradually establish order over the parts of the North it occupies. China would establish control over other parts, and some parts of North Korea could fall into continuing conflict that would likely devolve to anarchy.

While the ROK can implement Korean unification in areas it controls, it cannot in areas it does not. The ROK can maximize the area it controls and its ability to stabilize the North by acting promptly after a North Korean collapse, co-opting many of the North Koreans, having sufficient military force to perform these efforts, and demonstrating to China that the ROK can control and stabilize the rest of North Korea and will do so in ways that sustain Chinese interests, allowing China to withdraw its forces. But the ROK is ill-prepared in each of these areas today, and ROK demographics will force the ROK to cut the size of its military substantially over the next 10 to 15 years. In this period, the ROK military will likely fall well below the level needed for stabilization of the North even with relatively cooperative North Koreans. Unless the ROK makes more serious preparations for each of these tasks, the outcome of a North Korean government collapse could be a failure of Korean unification and a physical and financial disaster for the ROK.