December began with extensive coverage of China’s expanded air defense identification zone(ADIZ) and what it meant for South Korea. The coverage was measured, with most calling for a cautious South Korean response. But this budding debate was derailed by news from North Korea.

The North’s announcement of the purge and execution of Jang Seong-Taek surprised everyone. While the rumor had already surfaced via a South Korean lawmaker who was told of the purge by the National Intelligence Service(NIS), it was highly unusual for North Korea to publicly confirm it. This announcement only served to ramp up the rumor and speculation that always accompanies news emanating from North Korea.

On the domestic front, President Park Geun-Hye marked the one year anniversary of her election victory. The Blue House was far from celebratory. Approval ratings decreased sharply in the last half of December, driven primarily by losses among those 40 and younger. The ongoing NIS scandal continues to create problems for the administration, the handling of the country’s longest-ever rail workers strike brought strong criticism, and students around the country took part in a poster protest that asked the question, “How are you all doing?” With no domestic achievement of note in the year since her election, and seemingly nothing in the pipeline, the youth and the progressives were increasingly critical of President Park.

Unsurprisingly, the media focused heavily on Jang Seong-Taek with coverage ranging from basic facts to extensive speculation. This media attention increased the importance of South-North relations for the South Korean public, shown in Figure 1. This is a well-established trend with a stark example in the first half of 2013 following the North’s third nuclear test. 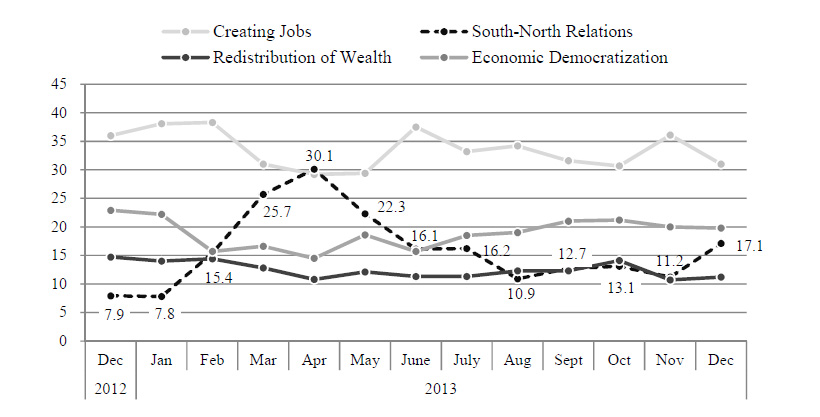 While the prime focus was on what the purge meant for the stability of the regime, there was also speculation about a North Korean provocation. Defense Minister Kim Kwan-Jin predicted that such a provocation could come between late January and early March. A majority (67.9%) of the South Korean public also sees a provocation as likely. It is worth noting, however, that there was no change in perceptions of current and future national security throughout December. This suggests that opinions on provocation likely reflect media reporting.

With regard to President Park’s overall North Korea policy, the public appears to approve with 58.2% stating as such. This number deserves further investigation. Among those aged 50 and older 73.4% approved of her North Korea policy, but for those under age 40 approval of the administration’s policy was 47.8%. This suggests that approval of current policy toward North Korea is being filtered through presidential approval. In the last half of December President Park’s approval among those under 40 declined sharply. This is precisely what regression analysis shows. Rather than being a judgment of the actual policy, it was instead a reflection of whether or not a respondent approved of President Park’s overall performance.

Of course, the purge and execution of Jang Seong-Taek once again highlighted the ongoing human rights abuses in North Korea. There has been increasing focus on this issue as progress on the denuclearization of the North remains at a standstill. However, the issue remains under the radar for the South Korean public. Following the purge of Jang, 41.8% stated they had some level of interest in human rights in North Korea. When this same question was asked in a survey conducted April 26-28, it was 37.8%. In fact, in the April survey, the South Korean public showed higher concern for other domestic minority groups, with 43.5% stating concern for the human rights of these groups.

Throughout the campaigns in 2012—both for the National Assembly and the Blue House—youth dissatisfaction with the political status quo was obvious. It was this dissatisfaction that led to the emergence of Ahn Cheol-Soo as a serious presidential contender. Of course, President Park eventually won the election and promised to heal the various divides of the country. While the regional divide developed over centuries and is now engrained in society, the generational divide is just coming to the fore and will intensify in the coming years.

Youth dissatisfaction became most apparent in the last half of December. While those in their 60s and older overwhelmingly view Park favorably—78.3% approved on December 16—approval among those in their 20s stood at 29.8% on the same day.

However, President Park’s low approval rating among Korea’s youth was not always the case. On December 10, Asan polling marked presidential approval at 43.5% among this cohort. But it was on this day that a student at Korea University placed handwritten signboard on campus that simply asked, “How are you all doing nowadays?” This poster unexpectedly kick started a movement among university students as they arrived at their collective answer: not well. The movement gained momentum for several weeks and led to severe declines in presidential approval. But by the end of December it was no longer a leading story. It may very well live on, but it already seems to have lost significant steam outside of those directly involved.

Ahn Cheol-Soo opted not to get involved with this youth movement, but continues to prepare to launch his own political party. Asan polling consistently shows that such a party would enter the polls with support of approximately 25%, making it the second most supported party. But it would not draw support from only those in their 20s. The data shows that his appeal is much broader than is generally acknowledged (Figure 2).

As illustrated, if Dr. Ahn were to announce the official formation of his own political party, significant support would be drawn from the 20s, 30s, and 40s. Thus, the support is not nearly as one-dimensional as is often presented in the media. While party support is not the same as candidate support, this data does provide a useful proxy as the establishment of Ahn’s party would be viewed as a measure of his ability to mount a presidential campaign in 2017.

Also of note is the regional support for an Ahn-led party. In the Honam region, Kim Dae- Jung’s political base, there is great interest in Ahn. Between the Democratic Party (DP) and Ahn’s potential party, that which carries Honam in the upcoming local election in June will be rendered the legitimacy of being the major opposition party. This region, in addition to the Seoul mayoral race, will be of high interest.

If Ahn’s party is formed, and all indicators point to that taking place eventually, it would be a disaster for the DP. In multiple polls, support for the DP falls to approximately 10%. Without Ahn’s party, the DP polls at 20%. This will likely ignite a serious political battle between the two camps.

On December 9, workers of the national railroad operator Korail, began what would become the longest-ever rail strike in the country’s history. At issue was fear that the railroads, and the KTX1 specifically, would soon begin to be privatized. The labor union feared such a move would lead to lost jobs and falling wages for the labor union’s members. Of course, the government maintained that privatization was never in the cards.

While the conservative media roundly criticized the labor union for its strike, it also reserved criticism for President Park’s handling of the situation. The sequence of events was widely seen as too heavy handed, highlighted by a raid on the Korea Confederation of Trade Unions (KCTU)—the first time that such a raid was conducted on the oft-controversial group.

Despite the widely negative headlines, the true impact of the Korail strike on presidential approval is hard to discern. While there does seem to be a decline in overall approval ratings (Figure 3), much of this was derived from decreases in approval among Korea’s youth associated with the “How Are You All Doing?” movement. When the strike began on December 9 approval was 57.2%. When the strike concluded approval was at 53.7% (Figure 3). True, the approval rate certainly does seem to have reached a lower plateau, but assigning the cause to the handling of the Korail strike is difficult. Even if that was the cause, the Blue House likely feels that it emerged relatively unscathed from what could have been a bruising battle. What once looked like a potential inflection point on which presidential approval would begin an irreversible decline, now appears to have been
nothing of the sort.

Clearly, President Park’s to-do list is long. Regional relations have deteriorated, and a North Korean provocation may be in the offing. Domestically she is faced with a country that has significant wealth, regional, and generational gaps. At the moment, her administration prepares unready to seriously address any of these divides. Her approval ratings already show signs of having lost those 30 and younger, and those in their 40s may soon be lost as well. While these groups are not her political base and did not get her elected, to accomplish her goals while in office it would be beneficial to at least have them involved. Instead, she now faces an uphill battle for the remainder of her term. That battle may increasingly play out as the old versus the young, and could lead to a worsening generational divide rather than an easing one.

The sample size of each survey was 1,000 respondents of adult male and female over the age of 19. All surveys employed the Computer Assisted Telephone Interviewing (CATI) and the Random Digit Dialing. Sampling method was quota sampling according to region, gender, age. The surveys were conducted by Research & Research, and the margin of error is ±3.1% at the 95% confidence level.

The sample size of each survey was 1,000 respondents over the age of 19. The surveys were conducted by Research & Research, and the margin of error is ±3.1% at the 95% confidence level. All surveys employed the Random Digit Dialing method for mobile and landline telephones.

This report is a product of the Public Opinion Studies Center at the Asan Institute for Policy Studies. To subscribe to The Center’s reports please contact Karl Friedhoff at klf@asaninst.org.

1. The KTX is the country’s high speed rail network.

Karl Friedhoff is a fellow in public opinion and Asia policy at the Chicago Council on Global Affairs. He was previously a Korea Foundation-Mansfield Foundation US-Korea Nexus Scholar and a member of the Mansfield Foundation’s Trilateral Working Group. Friedhoff was previously based in Seoul where he was a program officer in the Public Opinion Studies Program at the Asan Institute for Policy Studies. His writing has appeared in The New York Times and The Wall Street Journal, among others, and he has been a frequent guest on both TV and radio to discuss US foreign policy in Asia, South Korea’s politics, and international relations in East Asia. Friedhoff earned his BA in political science at Wittenberg University and an MA in international commerce at Seoul National University.