One of the most controversial issues in the run up to the 2018 Pyeongchang Winter Olympics was the formation of an inter-Korean women’s ice hockey team. The idea of an inter-Korean team had often been discussed between the two Koreas during past Olympics, but it had always fallen through. The Moon administration viewed the unified team as the perfect opportunity to deescalate tension on the Korean Peninsula, while marketing the games as the “Peace Olympics.” On January 17, South and North Korean negotiators pushed the idea through during a vice-ministerial level dialogue and agreed to compete together in women’s ice hockey.

However, the reaction of South Koreans to the decision was completely different than what the Moon administration expected. While many welcomed North Korea’s participation in the Winter Olympics, the formation of the unified hockey team triggered a strong backlash in South Korea.1 According to a poll conducted by Seoul Broadcasting System (SBS) and the Office of the Speaker of the National Assembly in January 2018, 81.2% said they welcomed North Korea’s participation in the Olympics, but 72.2% answered that the government should not have forced the formation of a unified women’s hockey team.2 Criticism against the decision was particularly strong among the younger generation and analysts speculated that the unified team controversy would lead to a decline in support for President Moon.

The unified team controversy has raised significant interest in the perception of North Korea and unification amongst South Korea’s young generation. Using data from the Asan Institute’s public opinion surveys, this Issue Brief investigates South Koreans’ perceptions of North Korea, economic assistance, and unification. Particularly, we analyze the similarities and differences between the newly emerging security conservatives in their 20s and the traditional security conservatives in their 60s and over.

Perceptions of the North Korean Threat

Compared to other age groups, a much higher percentage among those in their 20s and the elderly believed a war between the two Koreas could break out. Each year, the 20s consistently recorded the highest rates, followed by the 60+, with an exception in 2017. Throughout 2011 to 2017, at least 55.5% of South Koreans in their 20s believed that another war could break out on the Korean Peninsula [min=55.5% (2015), max=66.2% (2013, 2016)]. These results throughout the years confirmed that the two age groups perceived the North Korean threat much more seriously than other age groups and also explain their conservative tendencies regarding security issues.

Table 1. Likelihood of War on the Korean Peninsula by Age3(%)

Another important point is that the number of respondents in their 20s that have opposed providing economic aid to North Korea has continuously risen since 2011. Those who negatively viewed providing economic aid to North Korea in their 20s increased by 10.1% points since 2011 (2011= 78.4%, 2017=88.5%). As expected, the next biggest increase came from those in their 60s and older (9.4% p). 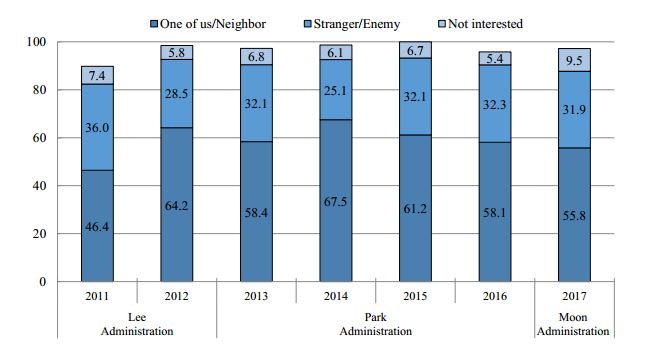 Another noteworthy point is that although both the 20s and the elderly shared similar views on North Korea’s threat and economic aid, the two had very different perceptions of North Korea (see Figure 2). Breakdown by age groups shows that the 20s are the most hostile and indifferent towards North Korea. In 2017, almost half of the respondents in their 20s (49.3%) considered North Korea as either a “stranger” or an “enemy.” Only 30% responded as such in all other age groups.8 Additionally, while only 32% of those in their 20s considered North Korea as either “one of us” or “neighbor,” the elderly response was almost double (61.7%).

However, age cohort breakdowns show a very different story. The lower the age group, the more indifferent they are to unification. From 2011-2017, about 25% of South Koreans in their 20s admitted they were not interested in unification (lowest=22.9%, highest=35.6%). On the other hand, indifference remained in the low 10% range among South Koreans in their 60s and over, with the exception in 2011 (31.4%).

Table 3. Indifference in Unification by Age10 (%)

We also looked at respondents preferred pace of reunification. Overall, a majority selected that the pace of unification should depend on the circumstances (54.6%). 22.3% answered there was no need to rush unification, and another 16.2% answered that it should happen as soon as possible. Among all age groups, the highest preference was “depends on circumstances.”

Analysis by age groups reveals that those in their 20s and 60+ had very different opinions on the urgency of unification. While 12% of South Koreans in their 20s opined that unification is unnecessary, only around half (6.4%) shared the same sentiment among the elderly. As a matter of fact, a little over one-fifth (21%) of the respondents in their 60+ said that the two Koreas should unify as soon as possible, while only 7.2% of the 20s age group answered so (40s=19%, 50s=18.1%). It is evident that the elderly have a greater sense of urgency and duty in terms of unification than respondents in their 20s.

According to the 2017 survey, when asked what would be the greatest benefit of unification, most respondents answered a lower risk of war (27.4%). Another 22% selected accelerated growth created through the combination of South Korea’s advanced technology and North Korea’s labor force. 14.6% chose alleviating the suffering of separated families, while another 12.3% replied restoring the unity and identity of the Korean people.

Age cohort breakdown shows that the elderly and the younger generation have completely different views on what the greatest benefit of unification would be. Compared to other age groups, many South Koreans in their 60s and over demonstrated high expectations for accelerated economic growth and restoration of national identity, while the South Korean youth had high hopes that threat of war on the Korean Peninsula would significantly decrease.

The data suggests that restoring national identity through unification is not important to the younger generation. Rather, it would be accurate to say that the younger generation views North Korea as a nation threatening South Korea’s security rather than as a people sharing the same ethnic background. 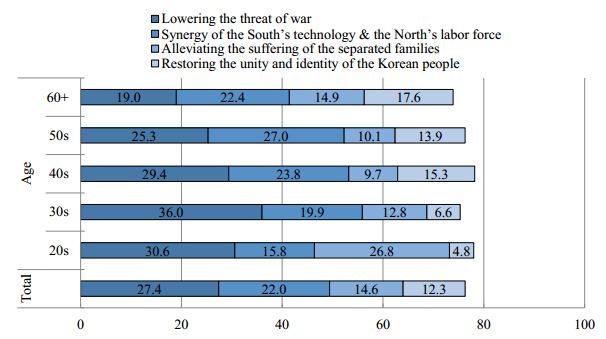 The unified team controversy during the Pyeongchang Winter Olympics has raised interest in understanding South Korean youth’s perception of North Korea and unification. The Asan Institute has continuously reported on numerous occasions that South Koreans in their 20s are emerging as new security conservatives. As shown above, the younger and elderly South Koreans both shared a common sense that North Korea is a serious national security threat and opposed providing economic aid to North Korea.

However, their conservatism in security did not lead to similar views of North Korea or unification. Unlike the 60s and over, who still share a sense of national identity with the North Koreans, many of those in their 20s merely perceived North Korea as an “enemy” or a “stranger.” In addition, there were many in their 20s that were indifferent to unification and did not view it as an urgent matter. Rather, many young South Koreans take the North Korean threat so seriously that they believed the greatest benefit of unification would be the lower risk of war on the Korean Peninsula.

The survey results suggest that a unification policy emphasizing “oneness” and homogeneity would not be well received by the younger generation. Rather, the government should focus on explaining the necessity of unification in realistic terms, not with nationalistic sentiment. In other words, it would be more effective to emphasize the benefits of unification in terms of reducing national security risks rather than relying on nationalism that emphasizes the restoration of a “Korean” identity.

Sixty-eight years of division has created an identity gap among the two Koreas. It is natural that the South Korean youth cannot connect with North Korea—a country with a completely different political system, social values, and culture. In order to fill this gap, the South Korean government should start social and cultural exchanges to remedy estranged sentiment toward North Korea. Considering that social and cultural integration can be time consuming, inter-Korean exchanges should not end as mere political stunts but become a consistent policy maintained from a long-term perspective. The task of the government is to convince the younger generation that unification would be beneficial for both Koreas with realistic benefits and logic rather than emphasizing nationalism.

Kildong Kim is a research associate at the Asan Institute for Policy Studies. He earned a BA in International Relations and History from Syracuse University and an MA in International Cooperation from Seoul National University. His research interests include geopolitics in Northeast Asia and inter-Korean relations.