The National Assembly passed a bill on Nov 17 to form a special prosecution unit for investigating the scandal surrounding Ms. Choi Soon-sil. 196 voted in favor of the bill while 10 voted against and 14 abstained1. The 10 “nay” votes came from members of the pro-Park camp within the New Frontier Party (NFP).

– Alleged involvement of a civilian in state affairs, including decisions related to appointments, organizational operation, and public/private corporate personnel management;

– Alleged extortion. Choi may have used her personal ties with the president for personal gains;

– Alleged extortion. Choi’s daughter, Chung Yoo-ra, may have received preferential treatment in high school and Ewha Womans University. Companies such as Samsung may have provided financial assistance illegally in return for favorable policies;

– Alleged dereliction of duty. Woo Byung-woo may have failed to perform his duty as Senior Presidential Secretary for Civil Affairs at the time and allowed Choi’s intrusion into the president’s decision and activities.

One of the criticisms regarding the special prosecution team is the failure to single out the most important subject for investigation: President Park.5 Others have suggested, however, that the team has the authority to expand its investigation to cover other related issues. This may include an investigation into President Park’s “missing 7 hours” during the sinking of the Sewol ferry on April 16, 20146.

In a separate prosecutorial investigation on Nov 20, investigators pressed charges against Choi along with Ahn BK and Jung HS. They also identified President Park as an “accomplice.” Choi and Ahn were charged with extortion and abuse of power, while Jung is accused of leaking classified documents7. Investigators will continue to investigate the president’s involvement even though Article 84 of the Constitution gives active presidents immunity from criminal charges. Mr. Yoo Yeong-ha, the president’s attorney, announced that he “regretted” the charges against President Park and labeled them as nothing but “imagination and conjectures.”8 Members of the opposition parties have now begun to discuss the possibility of impeachment.9

President Park’s approval rating dropped to the lowest level for any president at 5%. She has offered two public apologies in the span of two weeks. On Nov 12, approximately one million South Koreans gathered in central downtown Seoul just a few hundred meters from the Blue House to demand her resignation. This candlelight vigil was larger than the 2008 protest against imported U.S. beef and the largest since 1987 when South Koreans demanded democratic transition10. More protests are scheduled to take place during weekends and expectations are that these protests will continue to grow in size11 – 14. 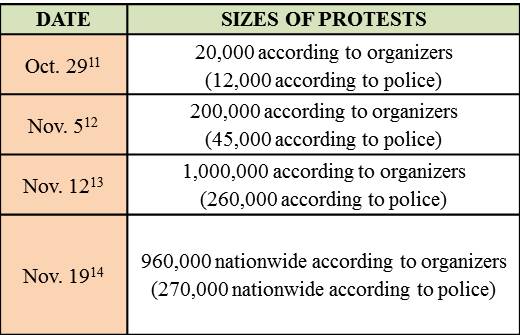 President Park’s response to the protests has drawn severe criticism. One questionable decision was the move to replace Prime Minister Hwang Kyo-ahn with Mr. Kim Byung-joon. When faced with strong opposition, she withdrew the nomination and visited the National Assembly to relinquish the nominating power to opposition parties.

She is also under fire for refusing to cooperate with the prosecutors. Prosecutors initially scheduled Nov 16 as the date for her interrogation. A day before the scheduled interview, however, the President hired an attorney (Yoo Yeong-ha) who announced that the prosecution should review all necessary documents before moving ahead with a “face-to-face” investigation. He also asked the public to “respect the fact that President Park is first and foremost a woman.”17

While President Park has been forced to remain silent on domestic affairs, she has been active on several diplomatic fronts. On Nov 10, she held a summit meeting with President Nursultan Nazarbayev of Kazakhstan18 and talked on the phone with US President-elect Donald Trump19. She also continued South Korea’s consultation with Japan on the information sharing agreement and on Nov 14, tentatively signed the General Security of Military Information Agreement (GSOMIA).20 Although she skipped this year’s APEC meeting in Peru from Nov 19~20, she will attend the US-ROK-Japan trilateral summit meeting in Tokyo next month21. 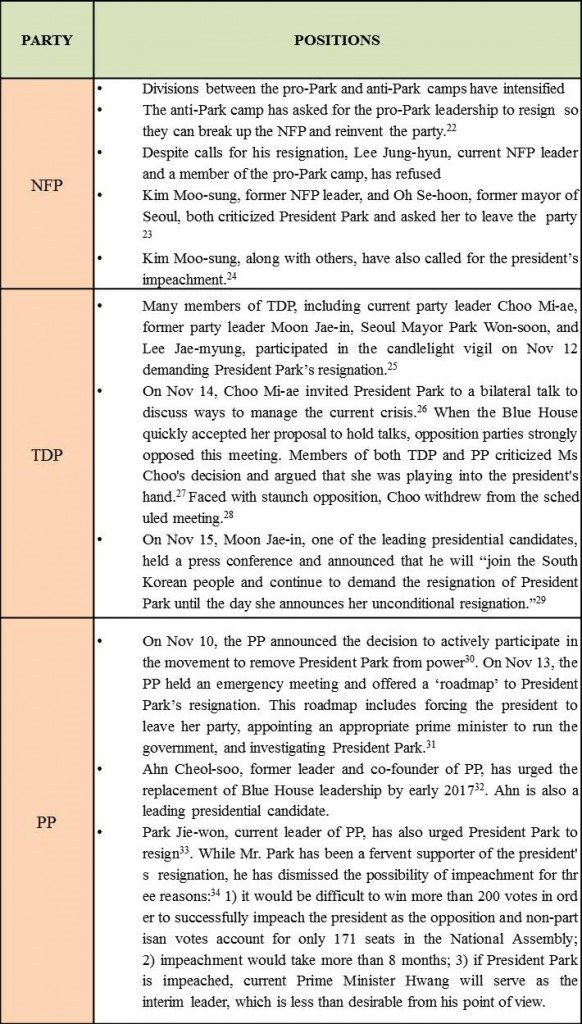 The National Assembly is mulling an increase in corporate tax rate, which currently stands at 22%. The two main opposition parties have been pushing for this reform given their pledge to do so in the last general election. As of Nov 7, seven bills have been referred to the Taxation Committee with top rate set for 32%.35

The TDP and PP has argued that an increase is necessary because the reduction in corporate tax under the Lee Myung-bak administration has not resulted in more investment nor employment.37 Another concern is the mounting annual average fiscal deficit, now worth approximately KRW 23 trillion.38

The conservative party has been against these proposals but the two opposition parties have used the Choi Soon-sil scandal to state that it is better to collect tax from corporations by imposing legal tax measures rather than using extortion as a form of “quasi tax” on corporations.39

The Intermediate Holding Company Act is facing stiff opposition in the 20th National Assembly. The Fair Trade Commission (FSC) announced on Nov 2 that it will draft the bill by the end of this year; but this statement is being questioned with a recent announcement by the FSC official stating that “the FSC is going to support the bill once it is introduced by an assemblyman, but has no plan to lay out the bill.”40

Even if the bill is introduced this year, circumstances are against the odds. Currently, the National Assembly is controlled by the opposition parties, which have opposed the bill calling it a special privilege for Samsung which is the biggest beneficiary of the act.41 To complicate the matter further, the company is under investigation for involvement in the Choi Soon-sil scandal.42

Finally corporate restructuring has been overshadowed by the scandal. There are questions as to whether Hanjin Shipping received unfair treatment for falling into court receivership. Some have claimed that Hanjin may have entered the court receivership because the company made little or no contribution to the Mir and K-Sports Foundation.43 One thing is certain. The scandal has been a significant distraction for the government with observers calling on the administration to begin implementing the plan which was released last month.44 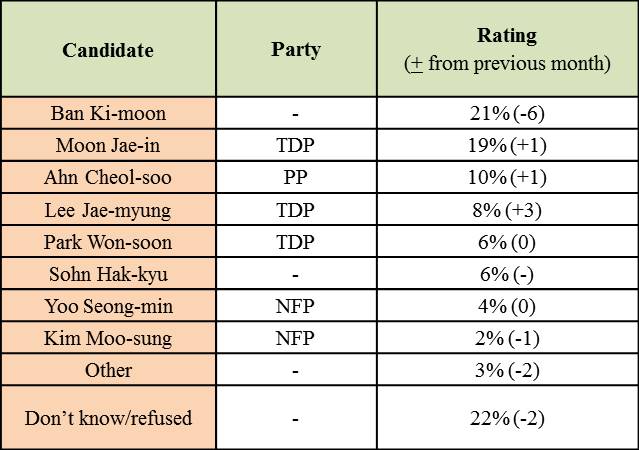 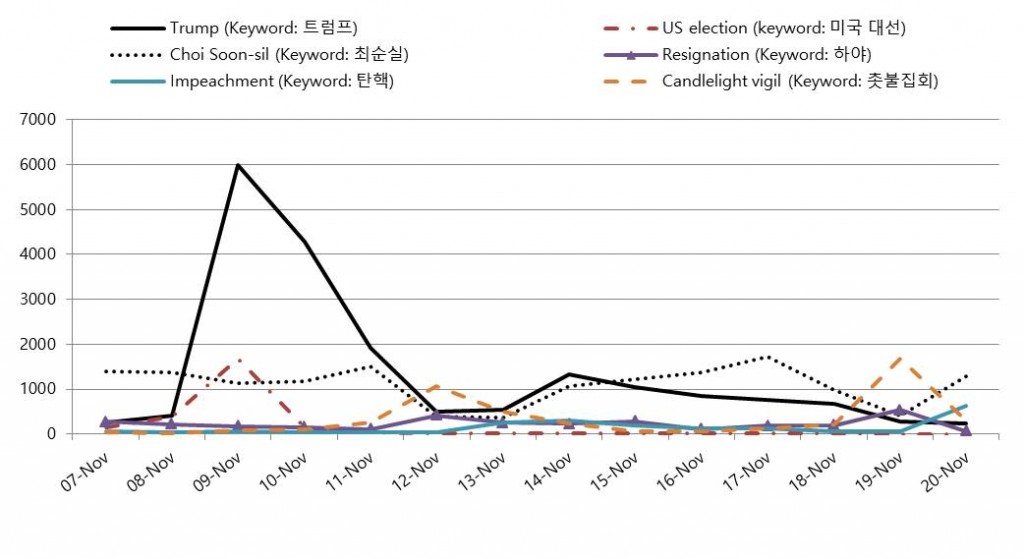