On June 12, US President Donald J. Trump and North Korean leader Kim Jong Un held the first ever summit. The two leaders signed a joint statement that consisted of four main parts: 1) new US-DPRK relations; 2) peace on the Korean peninsula; 3) reaffirmation of the Panmunjom Declaration; and 4) return of the POW/MIA remains.

Majority of the South Koreans believe that the summit holds great significance. But many were also disappointed by the substance of the joint statement. Before the summit, many pundits, including conservative parties, have repeatedly emphasized the importance of CVID.[3] For instance, the Bareunmirae Party issued a public letter to President Trump and Kim highlighting the importance of this issue.[4] Experts point out that the exclusion of CVID in the joint statement is a concern. Some argue that President Trump conceded too much to Kim. Others claim that the joint statement was very vague compared to other past agreements with North Korea.

One major concern involves President Trump’s statement regarding the suspension of the joint military exercise. Discussions are already underway as to whether Ulchi Freedom Guardian (UFG) will be carried out in August as scheduled. The Ministry of National Defense said it would discuss the matter with the US.[5] On June 14, President Moon announced that he would consider halting the joint military exercises if the talks between the US and North Korea continue.[6]

Experts point out that halting the joint military exercise could weaken readiness and possibly lead to the withdrawal of US troops from South Korea.[7] They claim that the situation in the Korean peninsula has become more tenuous for South Korea than before the summit.[8]

However, others caution against jumping to conclusions as the outcome of the summit would depend on follow-up meetings. Some suggest that the “firm and unwavering commitment to complete denuclearization of the Korean Peninsula” implies North Korea’s acceptance of the verification process.[9]

Support for President Moon rose to 79 percent, a four-point increase. This could be explained by the public’s overall support for the US-DPRK summit as well as President Moon’s role in facilitating that meeting. 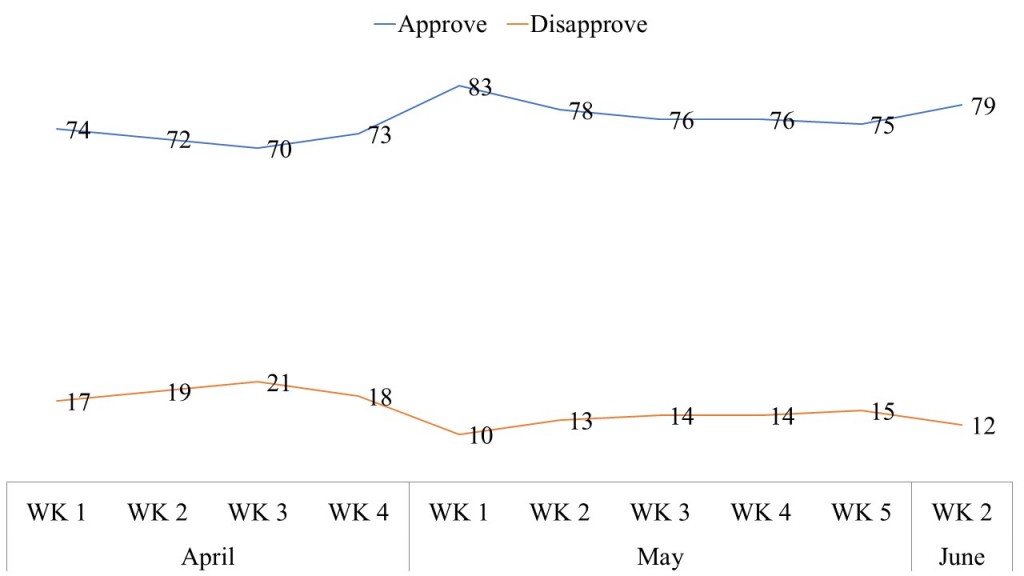 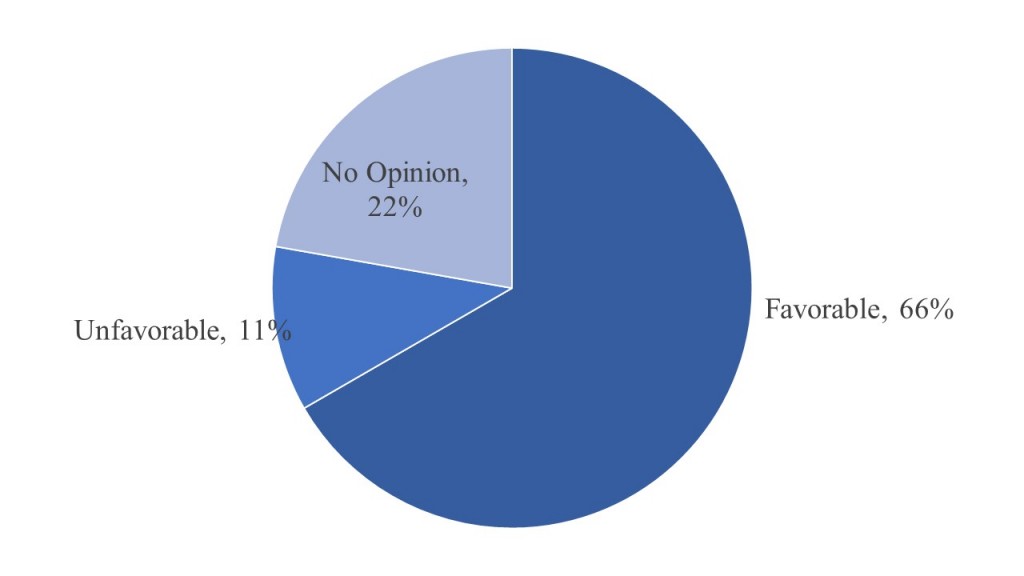 Views on North Korea’s Commitment to the Joint Statement[12] 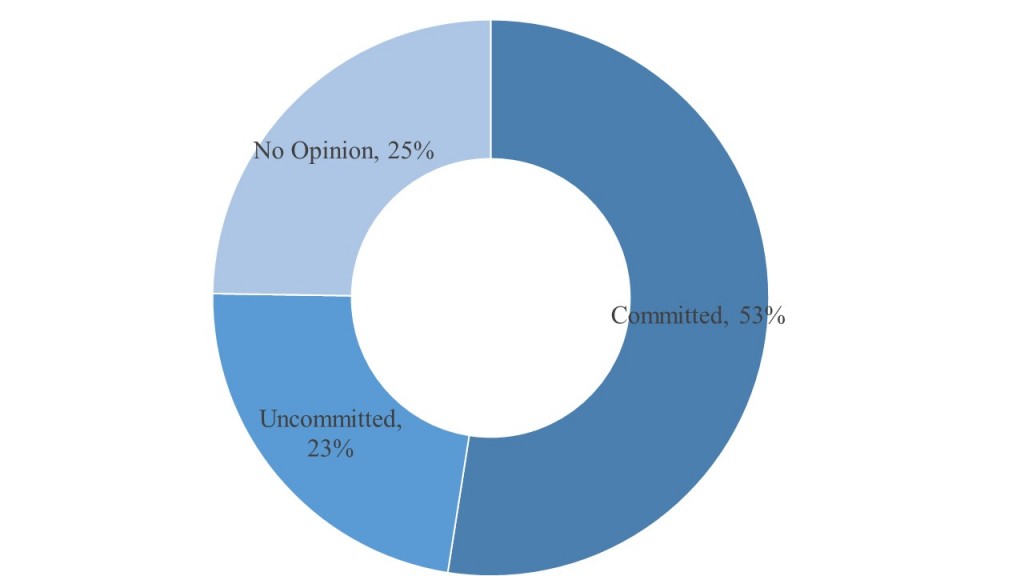 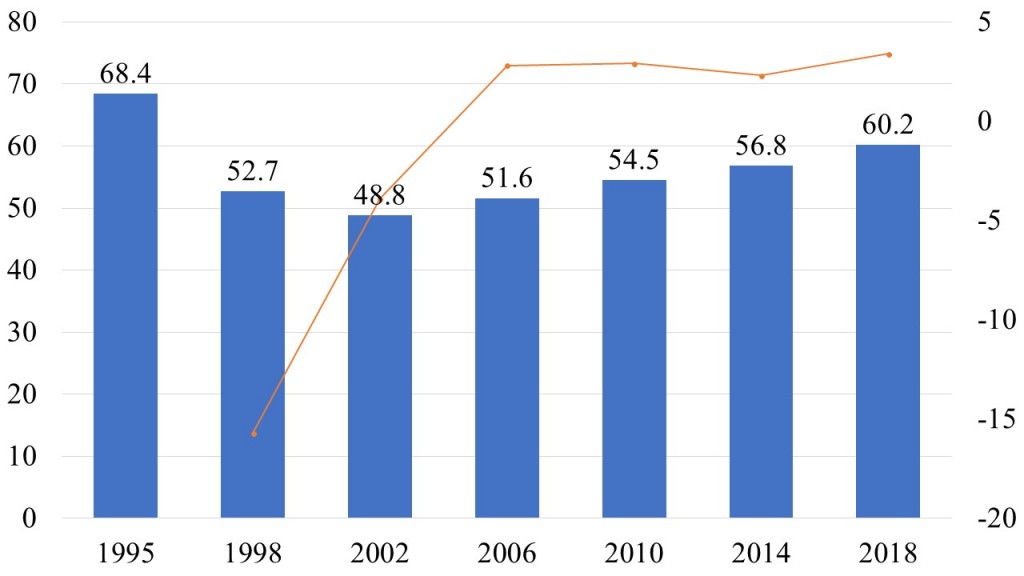 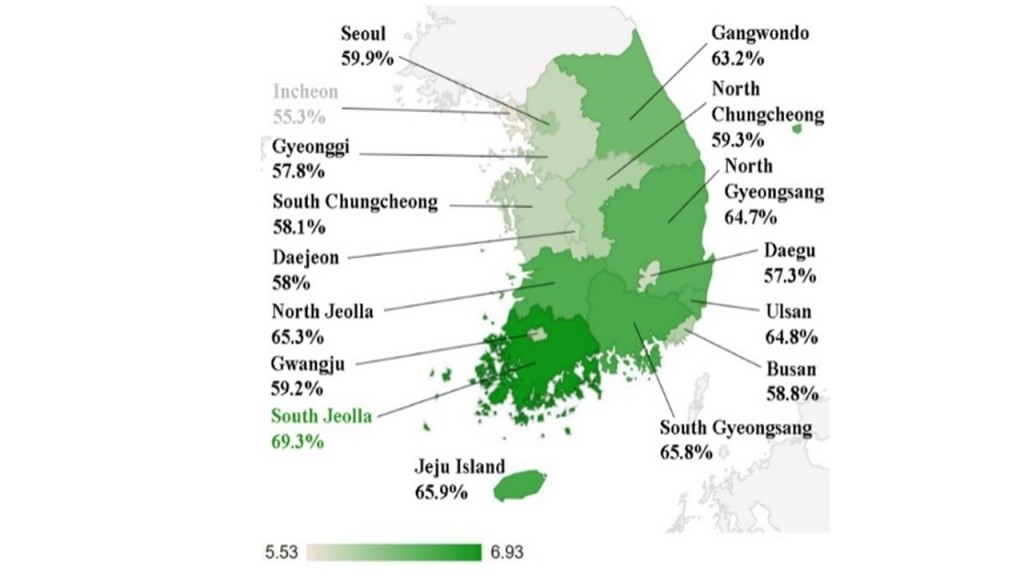 Ahead of the local election, most predictions leaned in favor of the TDP. In the exit poll data collected by KBS, MBC, and SBS,[15] 14 TDP, one LKP, and one independent candidates were expected to win major provincial and mayoral seats. In the by-elections, the TDP was also projected to gain 10 seats while the LKP was expected to win one.

There were no surprises as the TDP recorded a landslide victory. The TDP candidates won 14 out of 17 major provincial and mayoral seats, while the LKP won only 2 (BMP: 0, independent:1). 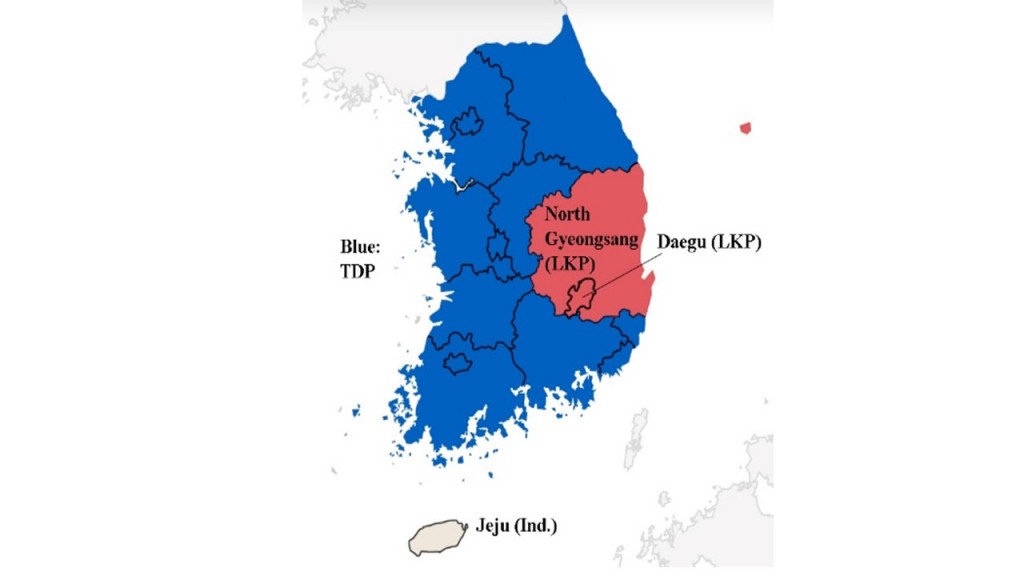 The LKP barely managed to hold their political stronghold in North Gyeongsang and Daegu. Busan, Ulsan, and Gangnam flipped in favor of the progressives.

Seats in the National Assembly[17] 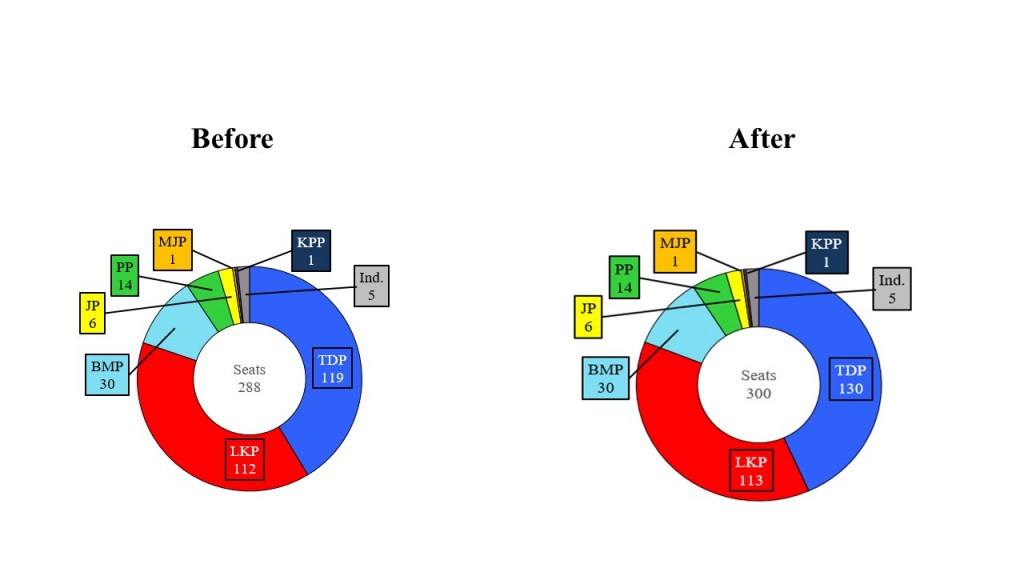 The results from the local election is expected to provide momentum for President Moon’s progressive agenda and also catalyze major changes in the conservative opposition. Shortly after the election, the LKP chairman Hong Jun-pyo took responsibility for the poor showing and stepped down from his position. Yoo Seong-min also resigned from his leadership role at the Bareunmirae Party. There is likely to be a major remake of the conservative party as the people are demanding a fundamental change.

Many welcomed the election results. Observers believe that the outcome was the result of public fatigue over the conservative parties. Some argue that the conservatives have failed to address the fundamental problems of socioeconomic inequality.[18] Pundits claim that national politics dominated by a single party could pose challenges for South Korea’s democracy and the system of checks and balances.[19]

The US Federal Reserve released a statement on Jun 13 to raise the target federal funds rate to 2%.[20] On Jun 14, the Bank of Korea (BOK) stated that it would maintain its base rate of 1.5% since it did not expect the FOMC increase to have a large impact on the domestic economy. It bears mentioning, however, that this is the first time in 10 years that the BOK’s base interest is above that of the FOMC. The rate difference between the US and Korea now stands at 0.5%.[21] 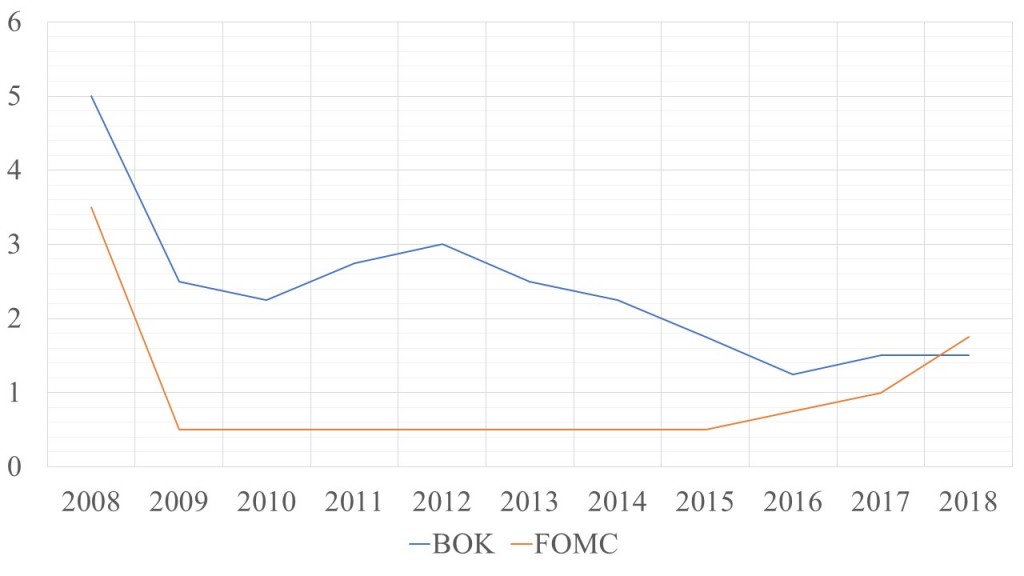 During the first meeting of the newly established Economic Ministerial Meeting for Innovation, the government announced that it would enact a plan, entitled the “Innovative Employment Stabilization Model”, which would seek employment growth through accelerated innovation rather than income growth. The government has designated electric/hydrogen vehicles and charging stations, and drones and smart farms as strategic industries to receive flexible financial support.[22]

On Jun 6, Korea lost its first investor-State dispute (Mohammad Reza Dayyani and others v. the Republic of Korea, 2015). The claim arose from the termination of an agreement with Entekhab (Iran) by Korea Asset Management Corporation, a public institution, for the sale of a majority stake in Daewoo Electronics. Entekhab filed for arbitration for the non-return of a 10% down payment (USD 50mn) before the termination of the contract, which the Iranian industrial company deemed was a violation of the Iran – S Korea, BIT (1998).[23] The Tribunal decided that Korea had to compensate Entekhab KRW 73bn (USD 68.1mn), to which the government responded by announcing on Jun 7 that it would be examining options to revoke the arbitral award through the London Court of International Arbitration (LCIA).[24] The government, in exploring this option, has not shared any details regarding the challenge or about the arbitral decision itself. This has been subject to criticism given the ongoing deliberation regarding Korea’s first ISDS case against Lone Star Funds.[25]

Minister Paik stated that the government intended to stand with the private sector in responding to changes in the trade environment. MOTIE identified global steel production overcapacity, rising trade protectionism and stagnating demand as three underlying reasons for why the government had to intervene.[26]