On Sept 9, President Moon nominated six new ministerial-level officials, including the highly controversial Mr. Cho Kuk.[1] During a televised nomination ceremony, President Moon stated that “dropping Cho’s nomination based solely on allegations leaves a bad precedent.” He also stressed his determination to reform the prosecutor’s office. The nomination followed a series of allegations, including corruption, fraud, and manipulation leading to a considerable rise in public criticism of the government. Shortly after nomination, the opposition party declared that it would pass a resolution in the National Assembly to remove Mr. Cho from office. There are concerns that Mr. Cho’s appointment can disrupt the ongoing investigation related to him and his family members. Observers point out that a prolonged confrontation could lead to another period of political stalemate in the National Assembly. A steep decline in President Moon’s public support over the past few weeks appears to demonstrate the public dismay over the nomination. 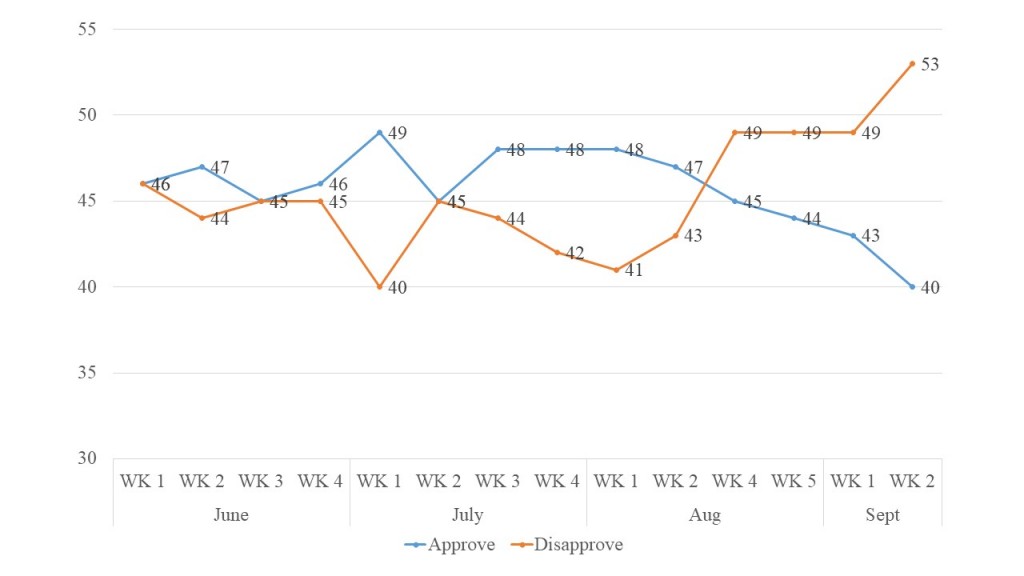 South Korea’s Ministry of Trade, Industry and, Energy announced that the plan to remove Japan from the whitelist would take effect on Sept 18.[3] In the meantime, the two countries held a working-level dialogue in Tokyo. Kim Jung-han (Director-General for Asian and Pacific Affairs of the Ministry of Foreign Affairs) met with Shigeki Takizaki (Director-General of the Asian and Oceanian Affairs Bureau of the Ministry of Foreign Affairs of Japan) to discuss export controls, termination of GSOMIA, and other bilateral issues.[4] The two sides maintained their stance but agreed on the need for continued dialogue. The two countries are also preparing for a ministerial-level meeting in New York during the UN General Assembly next week.

After the sacking of John Bolton,[5] the former North Korean ambassador to Vietnam, Kim Myong welcomed President Trump’s “wise political decision to take on a practical approach.”[6] North Korea is hoping to achieve a ‘big deal’ in the next potential talks with the US, especially with John Bolton out of the White House. Korena media outlets reported that President Moon is planning to discuss an interim nuclear deal with President Trump during the UN General Assembly in New York next week.

On Sept 11, Seoul announced that it would file a complaint with the World Trade Organization (WTO) over Japan’s export restriction. “The government decided to file a complaint with the WTO over Japan’s measure in order to protect our interests and to prevent the act of weaponizing trade for political purposes,” South Korea’s Trade Minister Yoo Myung-hee said during a briefing at the Government Complex in Seoul.[7]

On Sept 10, Moody’s Investors Service warned South Korean companies that their credit ratings over the next year may be downgraded. According to Moody’s, 19 out of 27 rated South Korean non-financial companies could see their credit ratings adjusted negatively due to deteriorating earnings during the first half of this year. “The ongoing US-China trade dispute will continue to affect the earnings of many export-oriented companies negatively. This will be particularly evident in the technology and chemical sectors, where firms typically export large amounts of commodities and components to China,” says Wan Hee Yoo, a Moody’s Vice President and Senior Credit Officer.[8]

Bank of Korea (BoK) Governor Lee Ju-yeol reportedly ordered major departments to prepare for a worst-case scenario amid the prolonged US-China trade disputes and Japan’s export restrictions. Major departments, including monetary policy, financial markets, and international departments, have been revising and elaborating their contingency plan since late July. This is in line with the BoK’s decision in July to lower its benchmark interest rate for the first time in three years.[9]

On Sept 19, the Organization for Economic Co-operation and Development (OECD) lowered its growth outlook for South Korea for 2019 to 2.1 percent, which is 0.3 percentage points lower than the earlier projection in May. The organization cited growing uncertainty due to the intensified trade dispute between the United States and China as the issue impacting the latest estimate.[10] The Korea Economic Research Institute (KERI) and the Hyundai Research Institute (HRI) slashed their growth outlook to 1.9 percent and 2.1 percent, respectively.[11]