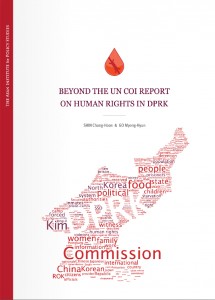 On February 17, 2014, the United Nations Commission of Inquiry on Human Rights in the Democratic People’s Republic of Korea released a landmark report. The report findings outline in horrendous detail the crimes against humanity being perpetrated in North Korea. In its investigations, the Commission found that widespread and systematic human rights violations are being committed pursuant to state policy. Further characterizing the DPRK as a totalitarian state that “does not have any parallel in the contemporary world,” the report finds that North Korea’s Supreme Leader, Kim Jong-un, bears direct personal responsibility for the crimes.

Invoking the concept of the Responsibility to Protect (R2P), the report called on the North Korean regime to immediately implement systematic changes to ensure protection of its citizens and their rights. It also recommended that the international community engage with civil society groups working in North Korea to provide information and raise awareness about human rights. The commission suggested referring the case to the International Criminal Court (ICC), as well as enacting targeted sanctions against individuals and entities responsible for committing abuses.

The UN COI Report places special emphasis on the plight of concentration camp inmates, religious believers, forcefully repatriated defectors, and international abductees. The Hon. Michael Kirby, the report’s chair, even asserted that the atrocious treatment of these groups by the regime is tantamount to “political genocide.” Yet, as the Commission’s report also makes clear, these are not the only groups suffering from grave human rights violations in North Korea. 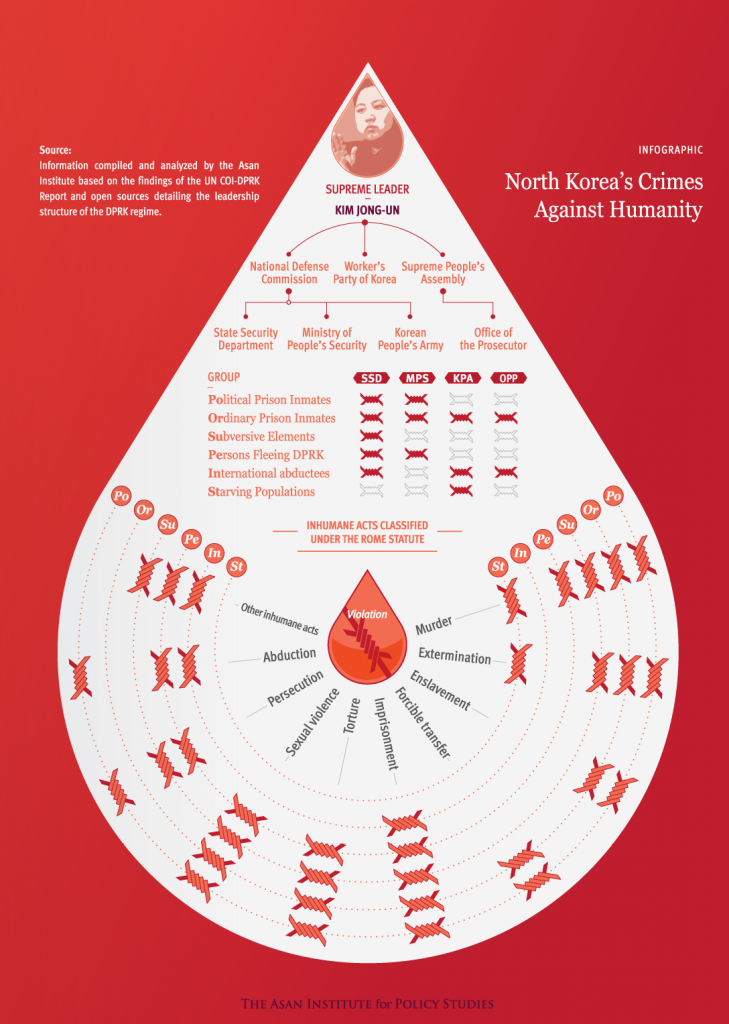 To augment the Commission’s findings, this report by the Asan Institute for Policy Studies, titled Beyond the UN COI Report on Human Rights in DPRK, seeks to further examine the human rights situation of ordinary North Koreans. In particular, it details abuses suffered by North Koreans sent overseas as forced laborers and those working in the country’s nuclear facilities. It concludes that these groups are subjected to slavery and forced labor conditions that violate international law. Institutionalized by the state government, these conditions are further symptomatic of how gross human rights violations are routinized at all levels of North Korean society.

Those working in the country’s nuclear program and as forced laborers overseas play an important role in the North Korean regime’s efforts to bypass existing international sanctions. Addressing the treatment of these two groups thus offers an opportunity to incorporate human rights issues into the existing sanctions regime. Based on interviews with North Korean defectors with direct experience in the two fields, this report identifies numerous state practices that constitute modern slavery in clear violation of human rights law.

With regard to North Korea’s use of forced laborers overseas, it finds: 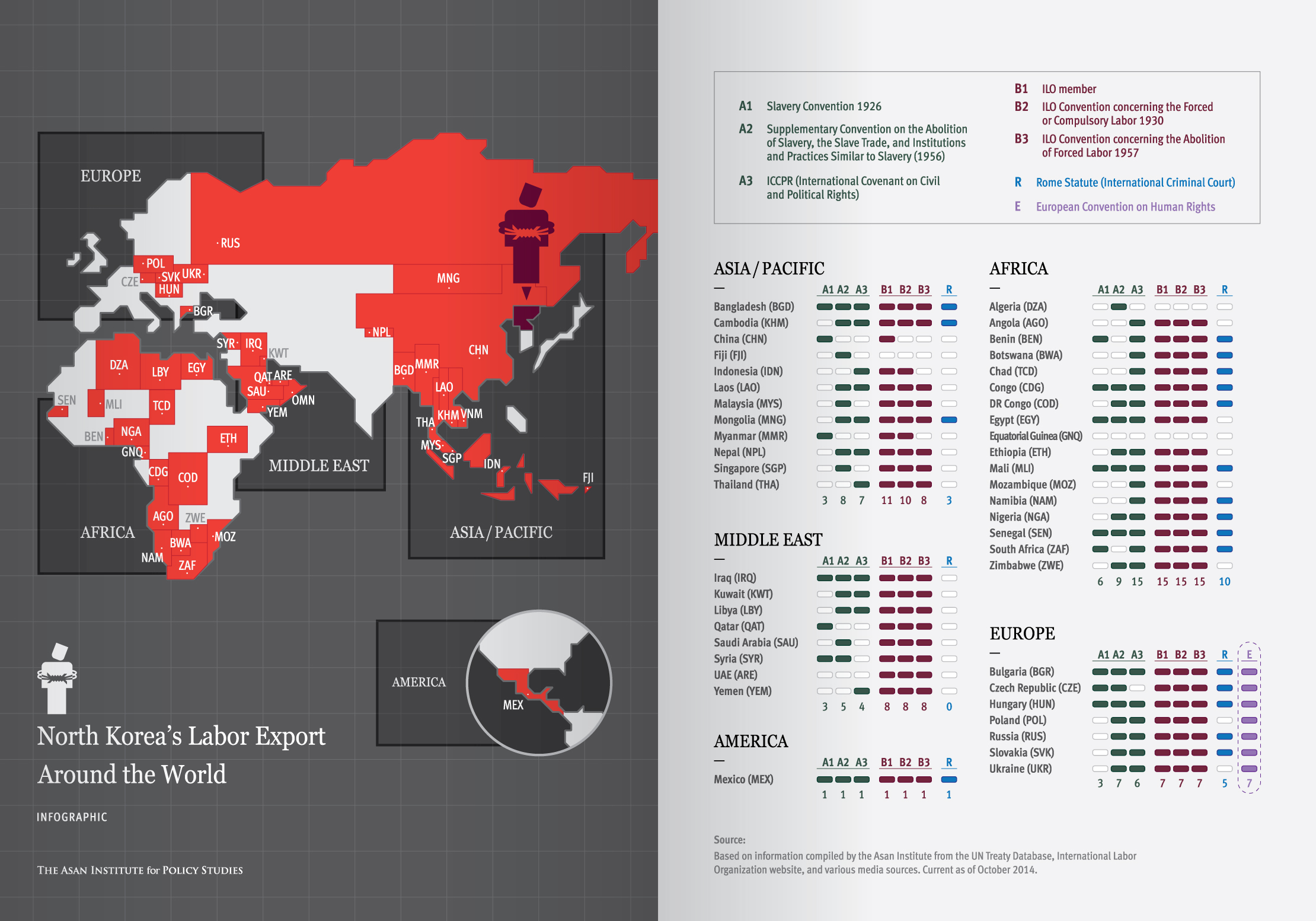 With regard to working conditions in North Korea’s nuclear facilities, it finds:

It is clear that, unless the international community applies more pressure, North Korea will continue these inhumane policies. The report thus offers several policy recommendations that can contribute to improving the human rights situation in North Korea.

4. North Korea should abide by its international treaty obligations and immediately abolish any slavery or forced labor practice as prohibited by the International Covenant on Civil and Political Rights (ICCPR) that it acceded to on September 14, 1981, and join the International Labor Organization and accede to other international anti-slavery treaties.

5. South Korea should fully support the UN human rights field office to be set up in Seoul and closely work with the UN Special Rapporteur on the human rights situation in North Korea. It should also strictly enforce the relevant law that regulates the direct payment of wages to North Korean workers at the Kaesong Industrial Complex.

* The report’s release has been covered in the Korean press by the following news agencies: Newsis, Kookmin Ilbo, Asia Economic Daily.

Dr. SHIN Chang-Hoon is a research fellow in the Nuclear Policy and Technology Program in the Center for Global Governance at the Asan Institute for Policy Studies. Previously, Dr. Shin taught public international law, international organizations, international economic law and the law of the sea at Seoul National University and Myongji University. Dr. Shin has been an active participant in international conferences held at the International Maritime Organization and is a member of the Compliance Group established by the 1996 London Protocol to the Convention on the Prevention of Marine Pollution by Dumping of Wastes and Other Matter. Dr. Shin’s research focuses on dispute settlement, the law of the sea, international environmental law, international humanitarian law and the study of the nonproliferation regime. He received a B.S. and an L.L.M from Seoul National University, and a D.Phil. from the University of Oxford.

Dr. GO Myong-Hyun is a senior research fellow at the Asan Institute for Policy Studies. Previously, Dr. Go was a postdoctoral researcher at the University of California, Los Angeles, Neuropsychiatry Institute. His research applies quantitative perspectives to traditional and non-traditional security issues, with special focus on North Korea, sanctions enforcement, and security and strategic dimensions of technology. Dr. Go’s latest publications include “Not Under Pressure: How Pressure Leaked of North Korea Sanctions” (2020) and “The Rise of Phantom Traders: Russian Oil Exports to North Korea” (2018). Dr. Go received a B.A. in Economics and an M.A. in Statistics from Columbia University in the City of New York, and the Ph.D. in policy analysis from the Pardee RAND Graduate School in Santa Monica, California. He was a Munich Young Leader of the Munich Security Conference 2015, and is currently a member of the Advisory Committee of the ROK Ministry of National Defense, a Senior Adjunct Fellow at the Center for a New American Security (CNAS), and an Associate Fellow at the Royal United Services Institute (RUSI).