South Korea is enhancing its defense capabilities to deter the growing North Korean nuclear and missile threat. The South Korean government announced this year that it will increase its defense budget to 43 trillion won ($40 billion), which is a 7% increase from 2017. The government also stated that much of this expansion will be focused on strengthening “the three axis defense platform.”1 However, these measures only focus on improving South Korea’s military capabilities. In order to fully mitigate the North Korean threat, South Korea also needs to focus on developing its civil defense. Incidentally, the Ministry of the Interior and Safety (MOIS) has announced that it will increase the number of civil defense training this year, but concrete discussions about the efficacy of civil defense are lacking.

This is especially critical given that any extreme provocation by North Korea directed at a densely populated area such as Seoul would be catastrophic. General Joseph Dunford of the U.S. Joint Chiefs of Staff stated at the Aspen Security Forum that a conflict on the Korean Peninsula would “…be a loss of life unlike any we have experienced in our lifetimes.”2 According to a report released by the Congressional Research Service (CRS), North Korean artilleries along the demilitarized zone (DMZ) could unleash approximately 10,000 rounds per minute towards Seoul. The report estimates a death toll in the range of 30,000 to 300,000 during the initial stage of conflict.3

One way to minimize a costly fallout is by strengthening civil defense.4,5But how prepared is South Korean civil defense? This brief attempts to provide a first cut assessment by considering the capacity and adequacy of South Korea’s civil defense evacuation facilities. The findings show that there is a significant lack of space to accommodate the South Korean population and recommends that the government consider increasing investment on more and better equipped facilities.

The Korea Research Institute for National Strategy released a report in October 2016 recommending that the government review the adequacy and efficiency of the evacuation facilities in South Korea.6 We attempt to follow through with this recommendation by comparing the information on location and size of these facilities made available by the MOIS7 with data on the South Korean population provided by the Korean Statistical Information Service (KOSIS).8To assess the availability of evacuation shelters, we utilize two standards as outlined by the South Korean government. The short-term standard requires that at least 0.825 m2 of shelter space is made available for up to 10 hours for one person. The long-term standard requires that each person be allowed 1.43 m2 of shelter space for up to 2~3 days. Table 1 shows the number of people who would not be covered by either of these standards in major cities and provinces.

Table 1. Number of Civilians Not Able to Access an Evacuation Facility Under Official Occupant Density Standards 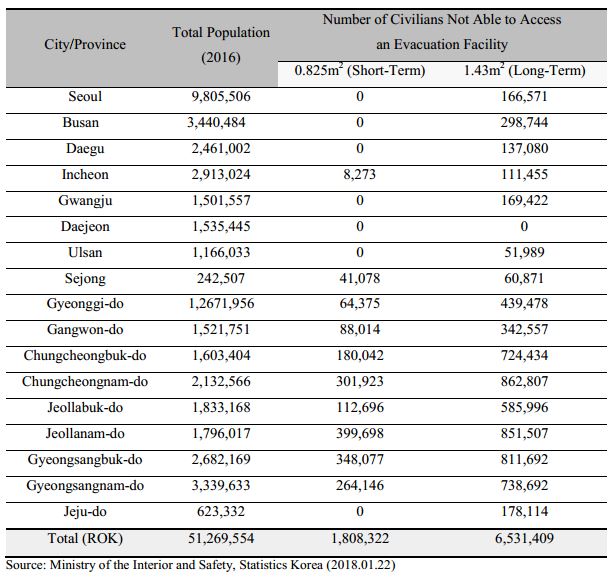 According to our estimates, there is a shortage of evacuation facilities in the event of both short and long-term crises as defined by the South Korean government. The extent of this shortage is especially acute for long-term emergency. Under the existing standards, over 1.8 million civilians (3.5% of total population) will be crowded out of evacuation facilities for short-term use while more than 6.5 million people (12.7% of total population) will not be able to take shelter for 2~3 days.

Figure 1. Percentage of Civilians without Shelter by City, County, and District

Figure 1 shows a more fine-grained analysis of the shortage at the city, county, and district levels. Of the 229 cities, counties, and districts in South Korea, 81 fail to provide enough facilities to accommodate its citizens on a short-term basis while 146 do not have enough facilities for long-term use. To address this shortage, the government will need to provide an additional 1.5 ~ 9.34 km2 worth of shelter space spread out across different parts of South Korea.

The lack of adequate shelter space is even more pronounced when we compare South Korea’s occupancy standard to that of other countries. As shown in Table 2, the minimum space requirement for single person occupancy is higher in all other countries except for Finland on a short-term basis. The data also suggests that South Korea’s evacuation shelters are ill-suited for long-term evacuations.

Figures 2 and 3 show the percentage of civilians without shelter in cities, counties, and districts when the other single occupancy standards are applied to South Korea for both short and long-term evacuations. 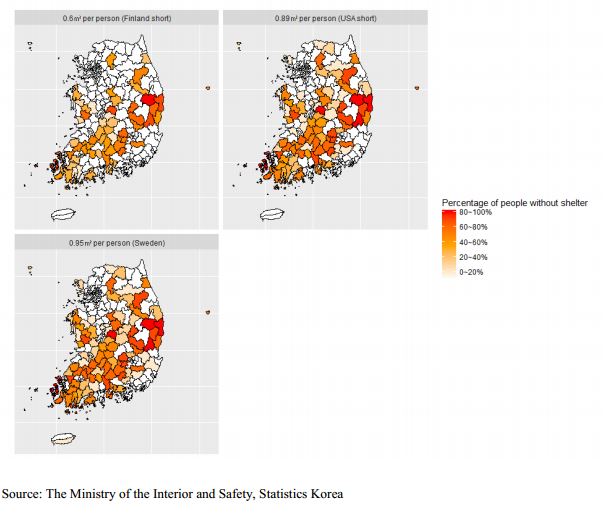 It is worthwhile pointing out that South Korea’s civil defense facilities are grossly inadequate for protection against weapons of mass destruction. Protection from biological, chemical and nuclear weapons require long-term evacuation. However, South Korea’s long-term evacuation occupancy standard (1.43 m2 per person for 2~3 days) is more restrictive than that of Germany, Finland, the US and Switzerland. For instance, facilities in the US and Switzerland can accommodate evacuees for up to 14 days while Germany and Finland’s facilities can provide shelter for up to 10 days. If South Korea adopts Germany’s standard occupant density of 1.98 m2 per person, 12 million civilians will not have access to evacuation facilities. Nearly half of South Korea’s total population would be unable to find shelter if Switzerland’s standard occupant density of 3.3 m2 per person were applied instead.

The lack of adequate shelter in South Korea is not a problem confined to South Korean citizens. As shown in Figures 4 and 5, there are more than 2 million foreigners living in South Korea. Many of them are from China, Vietnam, the United States, Thailand, and Japan. 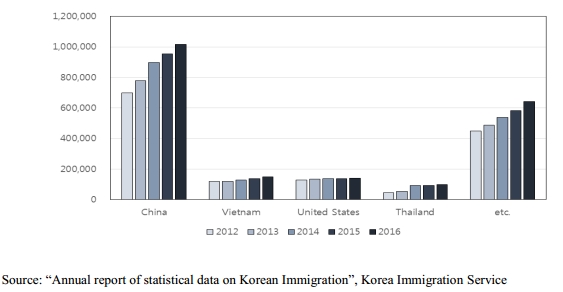 In addition to this, more than 13 million tourists visited South Korea in 2017 according to the Korea Tourism Organization. In other words, protection of the civilian population is an international concern that transcends national boundaries.

This study has shown that South Korea suffers from a shortage of evacuation facilities and that both Korean-nationals and foreigners do not have adequate protection in the event of a military contingency. In order to reduce causalities, the South Korean government must increase spending on civil defense. We believe that the work should begin with the construction of more evacuation facilities. This study also recommends that the South Korean government conduct a thorough inspection of its existing civil defense facilities and consider ways to improve the quality of these facilities. Installation of blast resistant doors and walls should be provided as are basic supply, such as potable water, sewage, emergency kits, gas masks, and Geiger counters.10,11 Finally, the government must place greater priority on raising awareness about the importance of emergency management response and civil defense. This is especially the case given that participation rate in civil defense training and personnel have consistently declined over time.12