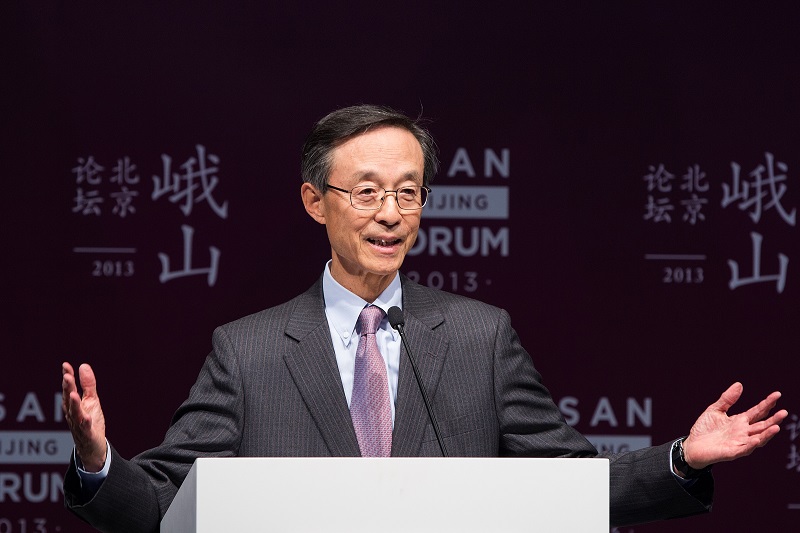 Han Sung-Joo, former Minister of Foreign Affairs of the Republic of Korea, delivered the keynote address for the second day of the inaugural Asan Beijing Forum on the topic of “Power Shift and Policy Dilemmas in Northeast Asia.” Minister Han’s address reviewed relations among Northeast Asia’s major powers and their impact on the Korean peninsula. Highlighting some of the key changes unfolding across the region, he characterized the current state of affairs as a rising China, normalizing Japan, rebalancing United States, and rejuvenated Russia. On the Korean peninsula, Minister Han outlind South Korea’s venture into “trustpolitik” compared with North Korea’s tandem development of its economy and nuclear weapons.

Minister Han began by noting this is a time when larger emerging problems, such as global warming, weapons of mass destruction proliferation, and growing resource scarcity, can only be tackled through cooperation and coordination. Yet national interests, perceived external threats, and domestic politics have led to an inward turn across the region. This is a time when finding solutions to challenges can only come through a greater amount of trust between countries.

Minister Han noted that despite its “rebalance to Asia,” the US has to pay “a lion’s share of its attention to Europe and the Middle East.” Its prolonged budget crisis has exacerbated speculation about US decline in the region, while its strict neutrality and non-involvement in disputes between its Korean and Japanese allies has the potential to weaken the alliance system. On its approach to North Korea, Minister Han acknowledged that there was serious fatigue and disappointment at the lack of progress on denuclearization. However, it was important for the US to reconsider engagment given North Korea’s increasingly sophisticated weapons program.

A critical choice confronts China: whether it will be a revisionist power that is dissatisfied with the US-led post-World War II system or whether it will be a status-quo stakeholder that has benefitted from, and remains interdependent with, the US-led international order. Minister Han cited two areas where China’s role remains important: dealing with the North Korean nuclear issue and managing rising nationalism and territorial disputes. He noted that although China has increased pressure on North Korea in recent months, there is “scant indication that it has made a decision to go all out to put a lid on North Korea’s nuclear weapons development.” On nationalism and territorial disputes, he quoted Deng Xiaoping’s 20-character strategy of “Be good at maintain a low profile; never claim leadership; hide our capabilities and bide our time; choose the right time; actively do it if something must be done.” The issue is that China seems to be having difficulty between hiding its capabilities and exercising its newly-won power.

Minister Han commented that, “Many of Japan’s leading politicians are exploiting the Japanese public’s sense of anxiety and insecurity to further their nationalistic and even jingoistic agenda.” With the passing of time, the feeling of responsibility for its wartime crimes is fading among many young Japanese. The return to becoming a “normal state” with a regular defense force and collective self-defense right is seen as a concept that is supported by the US and other Western allies. But Minister Han noted that Japan needed to choose between ‘breaking free from the post-war regime’ and thus alienating its neighbors or engaging more constructively with the rest of the world.

Over the past two years, Kim Jong-un’s new regime has exhibited a “zigzagging policy behavior” between hard-line and soft-line stances. Rather than indicating a carefully thought- out strategy, this probably reflects the unsettled power structure in the regime. He noted the competing rivalries between what he called “the coalition of pragmatic, party-oriented, and family-based civilian supporters” and more “hard-line, military-oriented, and xenophobic military leaders.” This competition is likely to be important in North Korea’s interactions with its neighbors.

Finally, on South Korea’s relations with the region, Minister Han speculated that it was growing increasingly difficult for the Park Geun-hye administration to balance good relationships with all of its neighbors. Relations with Japan are held hostage by much of the general public, media, and even the courts, all of whom construe any Japanese moves towards normalization as a return to its imperialist past. It remains popular for South Korean leaders to take a tough stand against Japan, such as President Park’s recent rejection of a summit meeting with Prime Minister Shinzo Abe. Yet, despite this anti-Japanese sentiment, Minister Han noted that Koreans did not view themselves as on the same side as China. There remain limits to how far South Korea should or could collaborate with China on pressuring Japan. On a growing number of issues, from missile defense to human rights, South Korea will need to take China’s position and interests into consideration. Minister Han concluded that given the limits of its geopolitical situation, South Korea’s only choice is to balance and compromise with all of the region’s major stakeholders.

The return of Russia to Asia in recent years underscores not a desire to rival the US or China, but to serve as a balancer between the two. While it has worked with China on issues such as Syria and Iran, it remains wary of China’s rapid rise and growing military power. Furthermore, the US rebalance to Asia helps divert military assets away from Europe, where Russia is more invested. On its relations with the Korean peninsula, Minister Han emphasized Russia’s predominantly economic focus on energy exports and infrastructure development. Its participation in the Six-Party Talks has also been useful, participating in UN Security Council sanctions even as it tries to maintain some leverage over North Korea.