Democrat Barack Obama is going to defeat Republican Mitt Romney by a comfortable margin in the 2012 presidential election. This forecast comes from a statistical model that uses the primary performance of the candidates and a cycle in presidential elections to predict the presidential vote. In plain English, Obama has history on his side, as well as the fact that he was unchallenged in the primaries. The model, called the Primary Model because of its heavy reliance on primaries, covers elections as far back as 1912, when presidential primaries were first used in large numbers. Since 1952, however, only the New Hampshire primary is included.

Overshadowed by the intense Republican battle, Obama won the 2012 primary contest of his party in New Hampshire in commanding fashion. For the record, Obama captured 82 percent of the votes in the Democratic primary of that state, against token opponents. Any time a candidate of the party that controls the White House has gone unchallenged for renomination, the odds are overwhelmingly in favor of that candidate’s victory in the November election. This was evident in 1912, when the incumbent president William Howard Taft first lost the primary battle and then the general election. Primary challenges to Truman (1952), Johnson (1968), Ford (1976), Carter (1980), and Bush (1992) augured poorly for them or their party in the general election.

The moment the New Hampshire primary was decided, the model was able to make a forecast for any match-up in November between Democratic and Republican candidates.1 The forecast gives Barack Obama 53.2 percent of the two-party vote over Mitt Romney with 46.8 percent. It is an unconditional forecast subject to no updating or other revision. It assures Obama’s reelection with 88 percent certainty.

The Primary Model, which is being used to forecast the 2012 presidential election, served this purpose, with some modifications, in the four previous elections (Norpoth 2000, 2001, 2004, 2008). It relies on the showings of candidates in primaries—hence the name of the model—and a cyclical dynamic of presidential elections, with an adjustment for the New Deal partisan realignment. As for the vote in the general election, the share of the incumbent-party candidate is based on the major-party vote only; votes for third-party candidates are excluded.2

The moment presidential primaries were introduced, a remarkable precedent was set. In 1912, the Republican Party decided to give its presidential nomination to a loser in its presidential primaries (Taft), whereas the Democrats nominated their primary winner (Wilson), and Wilson went on to victory in the general election. Message to party: nominate your primary winner and you will win the general election—if the other party does not nominate its primary winner. This simple rule packs quite a predictive wallop, but it requires some fine-tuning. Winning or losing primaries may be too crude an indicator to predict the percentage of the vote in the general election. It is also not uncommon for both parties to nominate primary winners. So the vote percentage in primaries provides more leverage. For sitting presidents, who count on being renominated without challenge, the model simply takes into account the vote share received in primaries. For contests without a sitting president, where competition is natural, a measure of relative strength is formed by expressing a nominee’s primary vote relative to the vote received by that candidate’s chief rival (the one with the next most votes, or the leading votegetter if the nominee did not win the primary battle). Short of knowing who the nominee will be, this rule can be applied to any candidate in primary contests, so forecasts can be made for all possible match-ups until the nominations are decided.3 From 1912 through 1948, the results of all primaries were included, but from 1952 onward only the New Hampshire primary is used in the model. In 1952, the adoption of a presidential ballot in the first primary dramatically changed the dynamic of the presidential nominating contest (Adams 1987; Buell 2000; see Figure 1 and Figure 2). 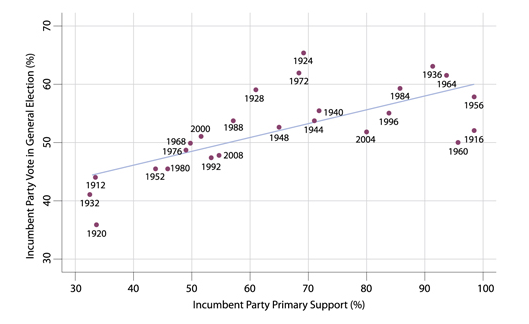 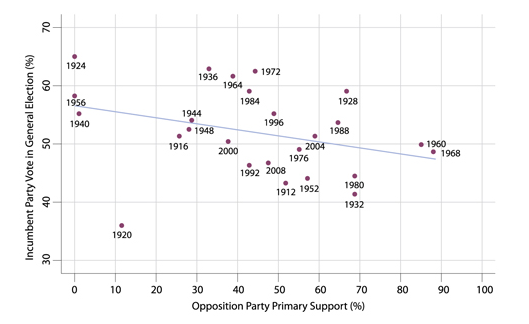 In addition to primaries, the forecast model enlists a dynamic of the presidential vote (Jones 2002; Norpoth 1995). Over the course of two centuries, American presidential elections have exhibited a distinct cycle. This is not the pattern associated with long-term partisan realignments that may last 30 years or so. It is a more short-term cycle that has escaped notice. Not as regular as the tides, it behaves more like sunspots and hurricanes. Since 1960, for example, whenever the White House party was in its first term, it has won re-election in five of six cases, with an average share of 55.5 percent of the two-party vote. Compare that to instances in which the White House party went for reelection after two or more terms. Since 1960, it has lost six of seven such elections, averaging a vote share below 50 percent. It appears that the prospect of losing looms large for the presidential party when it has held the White House for two or more terms. But the White House party has little to fear when it has been there just for one term.

That may be so because a president who enters the White House by defeating the candidate of the incumbent party—perhaps the sitting president himself—starts out with a pledge of change: from Kennedy’s “New Frontier” in 1960, through Reaganomics in 1980, to Obama’s “Hope and Change” in 2008. The electorate has loudly registered the demand, “It’s time for a change.” But change will take time to be implemented. At such moments in history, one may suspect, the public is willing to show some patience with the efforts of the new administration to work its magic. But when two terms are up, the public may no longer be inclined to give the administration the benefit of the doubt. By then, of course, the two-term limit prevents a sitting president from running for another term, making the odds of retaining the White House even longer for the presidential party.

Whatever the explanation, the pattern illustrated for the last 50 years can be spotted in presidential elections all the way back to 1828, when popular voting took hold across the United States (Norpoth 2002). This “cycle” in presidential elections, which occurs in an irregular fashion, is handled by means of a second order autoregressive process with a positive parameter for the first lag and a negative one for the second (Yule 1971). It produces an estimate for the average tenure of a White House party that comes to two and half terms. So it is not just recent history (since 1960), but electoral history going back to 1828 that augurs well for Obama in 2012. Having ousted the Republicans from the White House in 2008, he has an expected lease on the property for two terms, while leaving his party with a 50-50 chance of retaining it for another term. History alone forecasts an Obama victory with 51.8 percent of the two-party vote, though with only a 66 percent certainty.4

The model predicts the Democratic percentage of the major-party vote, regardless of whether that party was in the White House or not. As a result, the primary-support variables had to be inverted for elections with Republicans in control.5 With the primary support of the incumbent-party candidate carrying much greater weight than the one of the opposition-party candidate, whatever happened in 2012 on the Democratic side packs a bigger predictive wallop for the vote in November than what happened in the Republican contest. The estimates for the autoregressive vote parameters translate into an expected length of two and a half terms of party control of the White House. That is good news for a first-term president, like Obama in 2012, seeking reelection. Taken all by itself, the electoral cycle makes Obama the favorite this year, but the predicted vote margin would be too small to offer much comfort. Finally, the adjustment for pre-New Deal partisanship produces a constant estimate that suggests a close balance in presidential elections, notwithstanding the lead that Democrats have enjoyed in party identification for much of the time since the New Deal.

All of the information required by the Primary Model to make a forecast for the presidential election this November is known by now—the vote in the last two elections, the outcome of the New Hampshire primary, along with the partisan adjustment. Hence an unconditional forecast for the match-up between the major-party nominees can be offered. This is a final forecast, that is, without any possibility of revision. The prediction equation for the presidential vote in 2012 (expressed as the Democratic share of the major-party vote) is:

where DPRIM and RPRIM represent the primary support of the Democratic (incumbent party) and Republican (opposition party) nominees for president, capped within a 35–65 percent range.

It may come as a surprise to some observers that Obama was on the ballot in the New Hampshire primary. He did win in commanding fashion against a field of unknown vanity or write-in candidates. No Democrat of any stature challenged Obama for renomination in New Hampshire or any subsequent primary or caucus. New Hampshire thus provided a clear signal that Obama’s renomination would go uncontested. No sitting president who enjoyed this benefit has lost the general election. Meanwhile, in the hotly contested Republican primary in New Hampshire, Romney won handily.6For the 2012 general election, the Primary Model forecasts 53.2 percent of the two-party popular vote for Obama. This assures Obama’s reelection with 88 percent certainty.

In the 2012 presidential election, the twin advantages of history and primary make Obama a strong favorite to defeat Mitt Romney. Hardly any president who came to office in an election that ousted the White House party has lost his bid for reelection. This likelihood practically goes to zero for sitting presidents who faced no challenge in the primaries.

Using primary elections has numerous advantages for election forecasting. It enlarges the universe of presidential elections needed for model estimation all the way back to 1912; it features not only the incumbent side, but also opposition candidates; and it provides a real-life test of the candidates’ electoral performance, not proxy variables or trial heats. For over 50 years now, New Hampshire has encapsulated the primary message. As the first primary, New Hampshire thus hands the Primary Model one more advantage—being first to make an unconditional forecast of the presidential election in November.

The State University of New York at Stony Brook

Helmut Norpoth is a Professor of Political Science at State University of New York, Stony Brook. He has previously taught at the University of Texas, the University of Arizona, and the University of Cologne in Germany. He has also taught at the European Consortium for Political Research where he lectured on quantitative methods. He regularly assists The New York Times with its election night analysis and has served as a polling analyst for the Foreign Policy Association. Dr. Norpoth’s expertise covers wartime elections, historical changes in partisanship (realignments), and forecasting elections. He has co-authored or co-edited several volumes on elections in the United States, Germany, and the United Kingdom. Apart from books, his writing has appeared in the leading professional journals. Dr. Norpoth received both his M.A. and Ph.D. from the University of Michigan.