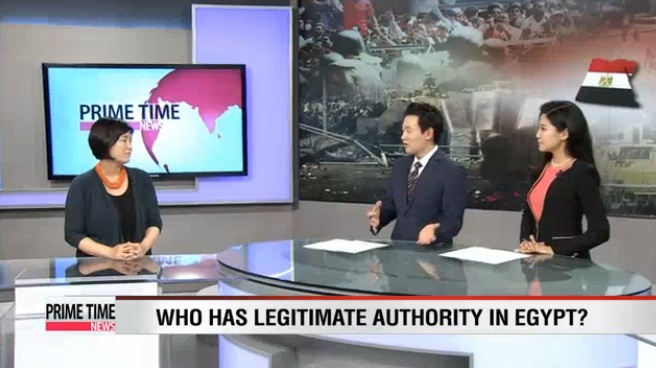 For an expert’s take on the deadly power struggle between the interim military government and opponents in the Muslim Brotherhood, we are joined by Dr. Jang Ji-Hyang, Director of Middle East & North Africa Center at the Asan Institute for Policy Studies in the studio.
Hosni Mubarak Egypt’s leader for 30 years before the Arab Spring will be released from captivity Meanwhile after deposing Egypt’s first democratically elected president last month the interim military leadership has arrested the Muslim Brotherhood’s spiritual leader.
Who really has legitimate authority here?

Curfews. Crackdowns on protest camps. And now the arrest of the Muslim Brotherhood’s spiritual leader. Are these victories for the interim leaders? And is this an accurate representation of the will of the people?

Ever since the military took over the country early in July the international community has been dancing around whether to call this a military coup and how to respond.
European foreign ministers are holding a meeting on the Egyptian crisis, and the U.S. is closely watching the situation unfolding in the region. To what extent should the international community intervene?

Korea had its own growing pains with its transition to democracy. Any transferable advice for Egypt?

Dr. Jang thank you so much for joining us tonight.