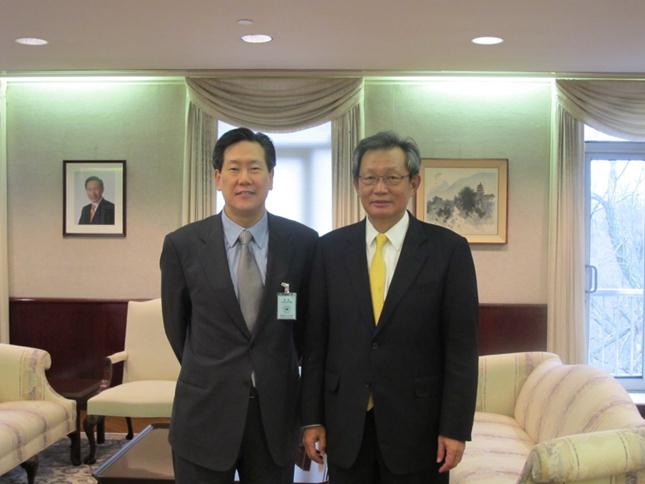 Meeting with the Korean Ambassador to the US, Y.J. Choi

To commemorate the launch of the Asan-Washington Fellowship *, and the Asan Institute’s rapid rise as one of the region’s top think tanks (5th in China, India, Japan and the Republic of Korea, and 2nd in Korea in 2012 Global Go To Think Tanks Report and Policy Advice), President Hahm Chaibong, visited 11 partnering institutions in Washington, D.C. from January 27 to January 31.

During the visit, he met with many Washington D.C. based government officials and policy experts, such as Ambassador Y.J Choi at the Korean Embassy, Dr. John J. Hamre, President and CEO of the Center for Strategic and International Studies (CSIS), Mr. Carl Gershman, President of the National Endowment for Democracy (NED), Dr. Douglas Paal, Vice President for Studies at the Carnegie Endowment for International Peace (CEIP), and Mr. Scott Snyder, Senior Fellow for Korea Studies and Director of the Program on U.S.-Korea Policy at the Council on Foreign Relations (CFR), to introduce the Asan Academy’s internship programs and the Washington D.C. branch of the Asan Institute for Policy Studies.

*3-month internship for students of the Asan Academy at various Washington think tanks.