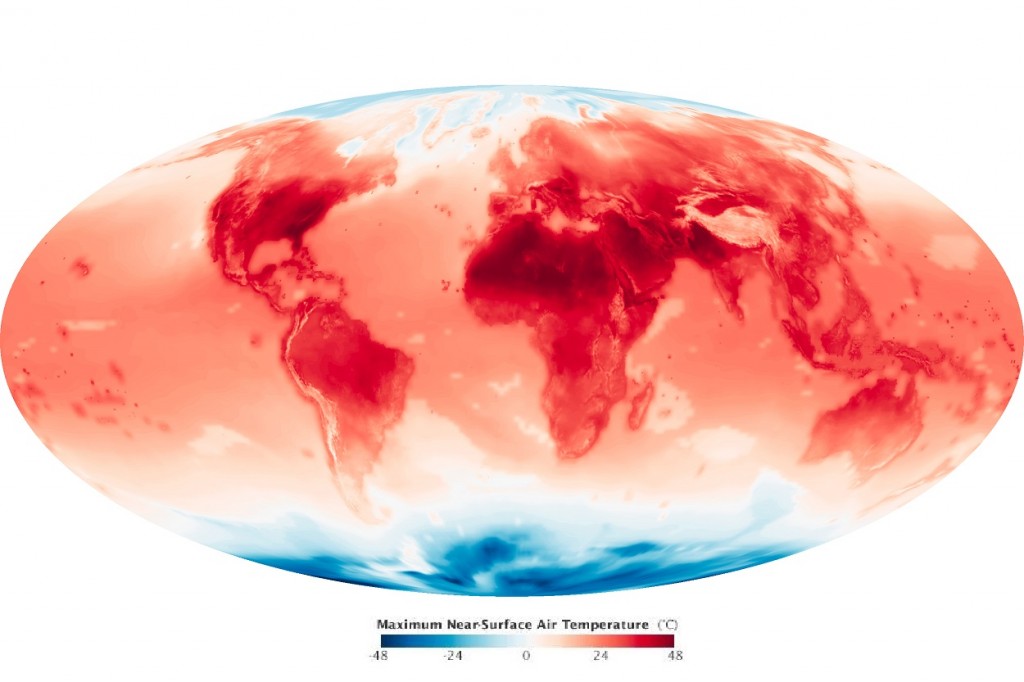 Temperatures are heating up. May fluctuated between hot or too hot. While drastically cold winter winds will provide an unwelcome reprieve from this year’s earlier-than-expected hot weather, one wonders if the weather this May was an exceptional case, or perhaps 2015 is unusual year for weather. Every year, it seems like every summer is the hottest one on record, while every winter is the coldest. Some might have dismissed the heat wave this past spring as an “extraordinary weather event.” However, it is undeniable that spring weather in recent years has been hotter than it was a decade ago, reaching temperatures higher than they have been in the past century.

Between the “extreme weather” of summer and winter, the comfortable and pleasant spring and fall usually allow us to take a breather. In particular, following a cold winter, the weather in May, the “queen of the seasons,” allows us to prepare for the sultry summer. Of course, the weather fluctuates so much that particularly hot or cold days can be found in any year regardless of the season. However, if these fluctuations become regular patterns over a span of 30 years or more, it is then considered a climate characteristic. The familiar way of describing the Republic of Korea as having four distinct seasons of spring, summer, fall, and winter is to delineate our country’s varying climate.

Although the ever-changing daily weather forecast may be frustrating, today’s weather does not disturb our daily lives much. At times the weather may defy forecasts and unexpectedly rain on the day of a picnic, but such events will eventually fade from memory. However, it is a different story if we are talking about a permanent change in climate. According to data released by the Korea Meteorological Administration (KMA), the average May temperature in Korea for the last 30 years (1981-2010) was 17.2℃, but this year it was 18.6℃, 1.4℃ higher than the average. These temperatures are the hottest since the KMA started keeping nationwide meteorological records in 1973. Last May, the KMA issued its first heat wave advisory since it implemented a heat wave alert system in 2008 (issued when daytime highs stay above 33℃ for two or more consecutive days). This year, heat wave advisories were announced a week earlier than last year. Moreover, the recent heat waves have been accompanied by severe droughts, impacting everyday life and the national economy.

The scorching heat earlier this year may be attributed to a “Super El Niño” event that is occurring for the first time in 18 years since 1997. The El Niño phenomenon is characterized by a warm current that raises sea level temperatures by at least 0.5℃ higher than average across the eastern equatorial Pacific for more than six months. As of May, the sea surface temperature has been about 1.1℃ higher than usual and continuing to move upward. When the El Niño phenomenon occurs, Central and South America face heavy rainfall and flooding while weather in Asia and East Africa is hot and dry. However, the phenomenon is not simply a matter of facing warmer temperatures earlier in the year, the fundamental cause can be attributed to global warming. The Korean peninsula is not the only area that has lost its queen of the seasons. The entire planet has seen average temperatures rise 0.74℃ over the last century. Since the beginning of modern meteorological recordkeeping in 1880, the year 2010 saw the highest annual average temperature worldwide—indeed, nine of the ten years with the all-time highest average temperatures are concentrated in the twenty-first century. In recent years, we have seen the further accelerating phenomenon of global warming. Given that temperatures on the Korean peninsula in the past century have risen 1.8℃, double the global average, changes in May weather have not been limited to this year.

Considering the atmospheric characteristics shared across the Earth, severe warming of the Korean peninsula cannot be seen as our sole responsibility or arising from our actions alone. Nonetheless, how we view the global warming and climate change remains up to us. How people adapt psychologically to such phenomena takes place irrespective of taking care of one’s health in the ecosystem, because the younger generations have no experience of past weather conditions. For today’s youth, May weather is no longer the queen of the seasons but rather the arrival of sultry summer heat. It is already difficult to divide the four seasons according to a schematic approach; it is no longer as straightforward as saying spring is March through May, while summer is June through August. It has been long a time since regional specialties have squared with our common perceptions. For example, Daegu city is no longer a major producer of apples, pollack fish no longer live in our oceans while tropical species are now found off our southern coast. But do our intellectual and social infrastructures reflect these changes? Even today the encyclopedia lists Korea as a country with a temperate climate, while tropical crops such as mangoes and coffee are now cultivated as farm produce in Korea. What if our younger generation were to take a school entrance exam on these topics? Would we see another Mujeup Satae (a 1964 testing scandal in which a junior high school entrance exam included a question for which the “incorrect” response mujeup, or daikon radish juice, was ultimately accepted after parents protested that “mujeup” was the answer found in students’ textbooks)?

People have begun moving beyond raising awareness of climate change, and global cooperative efforts are tackling the issue. Until now, our response to climate change has been focused on curbing greenhouse gas emissions and developing new energy sources. This is because the main culprit behind climate change is carbon emissions released from energy sources used to maintain modern human lifestyles. However, we have overlooked the investment as well as efforts needed to adapt to current climate change. As one research study has pointed out, out of a total $331 billion in climate funding provided worldwide in 2013, including both private and public investments toward, only seven percent was used for adapting to climate change, compared to 91% invested in mitigating carbon emissions. Specifically, financial resources invested in the adaptation field come mostly from public investment and rarely from private investment. Just as it is important to address the causes of climate change, we need to raise awareness and increase investment to adapt to the changing environment and conditions we are facing, such as the hot weather and accompanying droughts.

Edward Lorenz, a well-known meteorologist who coined the term “butterfly effect,” left us with the famous saying, “Climate is what you expect; weather is what you get.” The heat wave which enveloped us in May was not a singular weather phenomenon. We need to understand the heat wave within the context of climate change to connect it with our future. We need to adapt and respond appropriately to climate change in a range of areas, from the basic elements of our daily lives including food, clothing, and shelter to the reorganization of social infrastructures. A little flapping of wings in the present could cause unpredictable but significant results.

(The Korean version of this article was originally published on June 25, 2015.)

Dr. CHOI Hyeonjung is a Senior Fellow of Center for Foreign Policy and National Security concurrently serves as the Director of the Publication and Communications Department at the Asan Institute for Policy Studies. He is also an adjunct professor of sustainable development and cooperation at Underwood International College, Yonsei University. Previously, Dr. Choi was the Deputy Secretary for Green Growth and the Assistant Secretary for National Agenda at the Presidential Office of ROK. Dr. Choi also worked as a policy research fellow in the 17th Presidential Transition Committee. Prior to the public service positions, he was a research scholar at the Institute of Social Science, the University of Tokyo, Japan, and full-time instructor at the Korean Air Force Academy. Dr. Choi’s areas of research interest include national future strategy; climate change and sustainable development; renewable energy and green economy; international development assistance and cooperation; and non-traditional threats and human security. Dr. Choi received his B.A. and M.A. from Yonsei University and his Ph.D. in political economy from Purdue University, and he has been the recipient of the Order of National Service Merit and two Presidential Distinguished Service Awards.