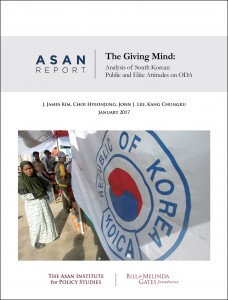 Although there have been many studies that have explored South Korean public attitudes towards ODA, this report presents the first elite survey on South Korean ODA. While South Korean elites, much like the public, favor continuation of the government’s ODA policy, our data reveals some non-trivial findings about potential improvements in existing public relations campaign and interesting ideological and gender differences among elites on various dimensions of existing policy.

This report has been made possible by the generous grant from the Bill & Melinda Gates Foundation. The purpose of this grant is to support Korea’s effort to sustain and increase engagement on global health and development issues. The authors would like to extend their gratitude to Ms. Yuko Watanabe and Ms. Kimberly Sutton, both Associate Program Officers at the Bill & Melinda Gates Foundation, for working with us and for their impactful work. Special thanks to Mr. Choi Sunghan for infographics.

– Introduction
– ODA Support and Source of Information
– Public Perception about South Korea as a Developed Nation
– South Korean Elite Attitudes on ODA
– Conclusion
– Survey Methodology
* The views expressed herein are solely those of the authors and do not necessarily reflect those of the Asan Institute for Policy Studies.

Dr. CHOI Hyeonjung is a Senior Fellow of Center for Foreign Policy and National Security concurrently serves as the Director of the Publication and Communications Department at the Asan Institute for Policy Studies. He is also an adjunct professor of sustainable development and cooperation at Underwood International College, Yonsei University. Previously, Dr. Choi was the Deputy Secretary for Green Growth and the Assistant Secretary for National Agenda at the Presidential Office of ROK. Dr. Choi also worked as a policy research fellow in the 17th Presidential Transition Committee. Prior to the public service positions, he was a research scholar at the Institute of Social Science, the University of Tokyo, Japan, and full-time instructor at the Korean Air Force Academy. Dr. Choi’s areas of research interest include national future strategy; climate change and sustainable development; renewable energy and green economy; international development assistance and cooperation; and non-traditional threats and human security. Dr. Choi received his B.A. and M.A. from Yonsei University and his Ph.D. in political economy from Purdue University, and he has been the recipient of the Order of National Service Merit and two Presidential Distinguished Service Awards.

John J. Lee is a senior associate at the Asan Institute for Policy Studies. Mr. Lee is also a member of the Young Leaders Program at Pacific Forum CSIS. His research interests include Northeast Asian security, US foreign policy, political issues related to North Korea, and economic sanctions. He received his B.A. in Government from Dartmouth College and M.A. in International Studies from Yonsei University Graduate School of International Studies (GSIS).