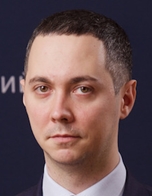 Mr. Alexander Gabuev is a senior fellow and the chair of the Russia in the Asia-Pacific Program at the Carnegie Moscow Center. Prior to joining Carnegie, Mr. Gabuev was a member of the editorial board of Kommersant publishing house and served as deputy editor in chief of Kommersant-Vlast, one of Russia’s most influential newsweeklies. Mr. Gabuev started his career at Kommersant in 2007 working as a senior diplomatic reporter, as a member of former President Dmitry Medvedev’s press corps, and as deputy foreign editor for Kommersant. Mr. Gabuev has previously worked as a nonresident visiting research fellow at the European Council on Foreign Relations and taught courses on Chinese energy policy and political culture at Moscow State University. He has worked as visiting fellow at Fudan University.