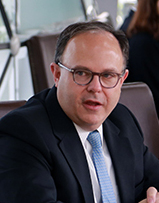 Special Envoy Seiler coordinates U.S. efforts on denuclearization of North Korea through the Six-Party Talks framework and leads day-to-day engagement with Six-Party partners. Previously, S/E Seiler served as the Director for Korea at the National Security Council (2011-2014) advising the President and senior White House officials on South and North Korea issues and planning and directing policy on Korea. A member of the Senior National Intelligence Service, Mr. Seiler served over 30 years in various positions in the Office of the Director of National Intelligence, the Central Intelligence Agency, and the National Security Agency. He participated in numerous rounds of Six-Party Talks and bilateral U.S.-DPRK talks, and has served over 12 years in the Republic of Korea. He received his M.A. degree from Yonsei University’s Graduate School of International Studies, and is the author of the book, Kim Il Song 1941-1948: The Creation of a Legend, the Building of a Regime.