On July 2, 2013, the Asan Institute for Policy Studies, the Partnership for Global Security, and the Stanley Foundation jointly held the 4th NSGEG (Nuclear Security Governance Experts Group) workshop on “Influencing the outcomes of the 2014 Nuclear Security Summit” in Vienna, Austria. 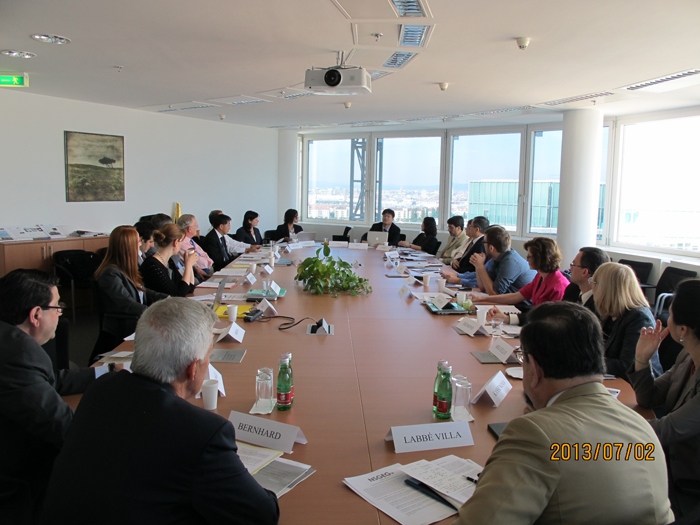 Above: Opening of the 4th NSGEG workshop.

Around thirty international members of the NSGEG discussed the updates and plans of NSGEG activities including the nuclear security governance “Gift Basket” for the 2014 Nuclear Security Summit, NSGEG book development, soft governance and hard governance, and communication strategy.

In the opening remarks, Kenneth Luongo, president of PGS, expressed appreciation for President Barack Obama’s decision to hold the 2016 Nuclear Security Summit in Washington D.C., which is a significant step to strengthen global nuclear security.

In his keynote speech, Ambassador Alfredo A. Labbe, permanent representative of Chile to the international organizations in Vienna, recognized the utility of governance-oriented approach to understand and resolve complex global issues. He added that legitimacy and efficiency are the key principles to build sustainable global governance architecture, and effective global governance would require collaboration among a committed group of like-minded countries, encouraging that NSGEG’s policy activities be committed to this goal.

Five core agendas to build soft governance are: 1) maximizing the current regime, 2) communication for confidence building, 3) incentive-based and voluntary regimes, 4) culturally sensitive peer review and best practices, and 5) creating a core of countries to drive the agenda. The NSGEG members will produce policy research papers on each agenda.

With regard to building hard governance, two of the following key issues were raised: 1) definition of nuclear security and clarification of the scope, and 2) universalization of the current nuclear security regime and development of a standardized checklist. There were comments on the difficulty of creating a new legally-binding instrument in the Summit process since it lacks universality. Participants suggested that hard governance would be an alternative mechanism for the Summit to sustain its outcomes.

The NSGEG plans to put forward its global nuclear security governance agenda for the upcoming 2014 Nuclear Security Summit in The Hague, Netherlands. The 5th Workshop will be held in the U.S. on October as one of the sessions of “The Strategy for Peace Conference,” which is an annual meeting hosted by the Stanley Foundation, and a NSGEG book composed of around 20 working papers of the former NSGEG workshops will be published early next year. Meanwhile, the NSGEG will cooperate with APLN, ELN, LALN, and others to create further regional cooperation on nuclear security governance.