Ri Su Yong, the Vice Chairman of International Affairs for the Korean Workers Party, arrived in Beijing on May 31 to meet high ranking Chinese officials, including President Xi Jinping. While observers have different interpretations about this visit, the South Korean media emphasized that both men avoided the words “nuclear” and “denuclearization.”1

South Korea and China have maintained a closely cooperative relationship and a strategic line of communication with regard to North Korea and its nuclear issue. As a permanent member of the UN Security Council, China has stated that it adheres fully and strictly to the implementation of UN sanctions. President Xi reiterated this point in his meeting with North Korean diplomat Ri Su Yong that, ‘China maintains a consistent and clear policy on the Korean Peninsula.’ … It is important to bring about North Korea’s sincere change in attitude. Our government hopes that the China-DPRK relations can develop into one that can help North Korea realize the realities of the international community and commit to denuclearization as soon as possible.2

Meanwhile, a recent study released by the Korea Institute for International Economic Policy (KIEP) suggests that the total value of trade between China and North Korea decreased by nearly 15% (USD$5.4 billion) during 2014-15, with trade from DPRK to China decreasing by 12.6% (USD$2.5 billion) and that from China to DPRK decreasing by 16.4% (nearly USD$3 billion).3 The report suggests that the decrease is due to a combination of price drop of commodities, sluggish Chinese economy, and increased productivity in North Korea. The KIEP data does not account for the change in Sino-North Korean trade after the sanctions were imposed on North Korea in early March. More recent data announced by the Chinese authorities suggests that China’s first quarter trade with North Korea actually increased by nearly 15% compared to a year ago.4

North Korea conducted an intermediate range ballistic missile (IRBM) test on May 31. This was the fourth test involving an IRBM, named Musudan. As in all previous tests, however, it ended in failure as the missile exploded on the launch pad before take-off.5 It was reported that a number of engineers and staff members near the launching area suffered injuries as a result of the explosion.6 DailyNK estimates that the four failed IRBM tests cost the North Korean government approximately USD $80 million.7

Why has there been a noticeable rise in the frequency of similar tests/launches since early March? One interpretation is that these tests are intended to send a message to the international community that tougher sanctions will only beget a more defiant response from North Korea.8 Another interpretation is that these displays are intended to show the regime’s resolve in perfecting its missile technology in tandem with its nuclear program.9

The Korea Development Institute (KDI) estimated that the South Korean economy will grow by 2.6% in 2016 – which is 0.4% point lower than the December forecast.10 Drop in exports and domestic demand is blamed for the adjustment. While acknowledging the impact of restructuring, the KDI noted that unemployment and volatile financial markets could increase economic uncertainties and lead to further contraction. Current account is expected to record a surplus of USD$110 billion. Both exports and imports are expected to decrease by 8.2% and 11.5%, respectively.

The Bank of Korea (BoK) announced that the monthly account for April recorded a surplus of USD$3.37 billion.11 Export of goods decreased by 19.2% and imports also fell by 18.7%. South Korea has consistently recorded a trade surplus since 2014 despite declining exports due to weak domestic demand. But this was the first time that the decline in exports was larger than that of imports.12

STX Offshore & Marine has filed for receivership on May 27. The creditors have decided to cut off additional funding after three years of keeping the company afloat. The Seoul Central District Court criticized the creditors (including the banks) for delaying the restructuring process.13 Others blamed the government for pressuring the banks to keep the failing company afloat and increasing the size of the debt.14 The STX example has raised concerns about the government’s restructuring plans. The government and state-run banks, for instance, have poured in over KRW 7 trillion to the Daewoo Shipbuilding & Marine Engineering after the 1997 Asian Financial Crisis.15 Daewoo Shipbuilding is preparing a large scale self-rescue measure to secure KRW 3.4 trillion in additional funding. Hyundai Heavy Industries (HHI) and Samsung Heavy Industries (SHI) both reached an agreement with their creditors over a preemptive restructuring plan to secure KRW 5 trillion of additional funding (KRW 3.5 trillion for HHI and KRW 1.5 trillion for SHI).

Government officials and the BoK appear to have achieved a breakthrough in negotiations over the recapitalization fund to have the Korea Credit Guarantee Fund (KODIT) guarantee the BoK loan to troubled banks. Under this arrangement, the Industrial Bank of Korea (IBK) can serve as an intermediary and establish a special purpose company (SPC) for managing the recapitalization process. There are other options also under discussion, such as directing the Korea Asset Management Company (KAMCO) or KAMCO and IBK to establish a SPC. The government’s direct investment can be introduced in next year’s budget.16

To offset the impact of restructuring, the government and the ruling party is considering the possibility of designating the shipping industry as a “Special Industry for Employment Support.” The program was introduced last year to offer administrative and financial support to businesses that expect dramatic unemployment. It provides financial assistance to firms in order to lower lay-offs, extend unemployment benefits, and provide training.17

The National Assembly is mired in conflict as the two largest parties, New Frontier Party (NFP) and Together Democratic Party (TDP), continue to debate which party should control the speakership. The TDP maintains that the largest party should control the speakership while the NFP claims the ruling party should hold the speakership. There are two ways to resolve this dispute. First, the NFP may reinstate the ex-NFP independents, thereby making the NFP the largest party in the Assembly; however, the NFP has stated that it will not reinstate the ex-NFP independents until the Assembly is fully organized.18 Second, and more likely, the full Assembly may appoint the speaker by majority rule as stipulated in Article 15 of the National Assembly Act. If the Assembly moves in this direction, the People’s Party (PP) is expected to play a significant role in determining the next speaker.19

Frequency of Media Coverage (# of Articles) 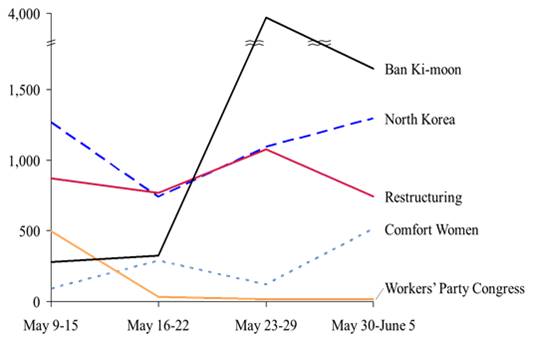