Response to the Latest ICBM Test

From Dec 2~8, South Korea and the US conducted a combined air force drill as a response to the latest North Korean ICBM test. The drill called Vigilant ACE has been conducted on a regular basis, but this one was by far the largest in scale. Approximately 230 aircrafts were deployed including F-22, F-35A, F-35B stealth fighter jets, B-1B Lancer, EA-18G Growler, F-15C, and F-16.[1]The South Korean government also announced imposing additional unilateral sanctions against North Korea on Dec 10. The new measure targets 20 North Korean institutions and 12 individuals involved in financing North Korea’s WMD program.[2] It is worthwhile noting that these targets are already sanctioned by the US.

South Korean President Moon Jae-in visited China from Dec 13-16. This is the first summit meeting held between the two leaders. The two leaders agreed on four principles; 1) no acceptance of war on the Korean Peninsula; 2) nuclear-free Korean Peninsula; 3) peaceful resolution through negotiations to resolve the North Korean nuclear issue; and 4) improvement of inter-Korean relations.[3] The two leaders agreed to establish a hotline and expand ROK-China cooperation. The two countries also agreed to expand cooperation in seven areas including commerce, energy, and environment, among others.[4]

Generally, the Korean public appears to have a very negative impression of this meeting as the leaders failed to produce any joint statements. There were also numerous controversies regarding China’s treatment of President Moon and the South Korean press pool during the four-day visit. For instance, several Korean media outlets pointed out that President Moon was invited to only two state dinners with Chinese officials. Some observers also criticized Minister Wang-Yi for tapping President Moon’s shoulders during salutations.[5] Two Korean reporters were assaulted by the Chinese security service during an event in Beijing.[6] Finally, critics also pointed to lack of substance in this meeting as President Xi merely repeated his position on THAAD and the issue of sanctions was never raised.[7] Progressive media outlets, however, painted a more positive picture and depicted the meeting as an important first step in restoring bilateral ties.[8] 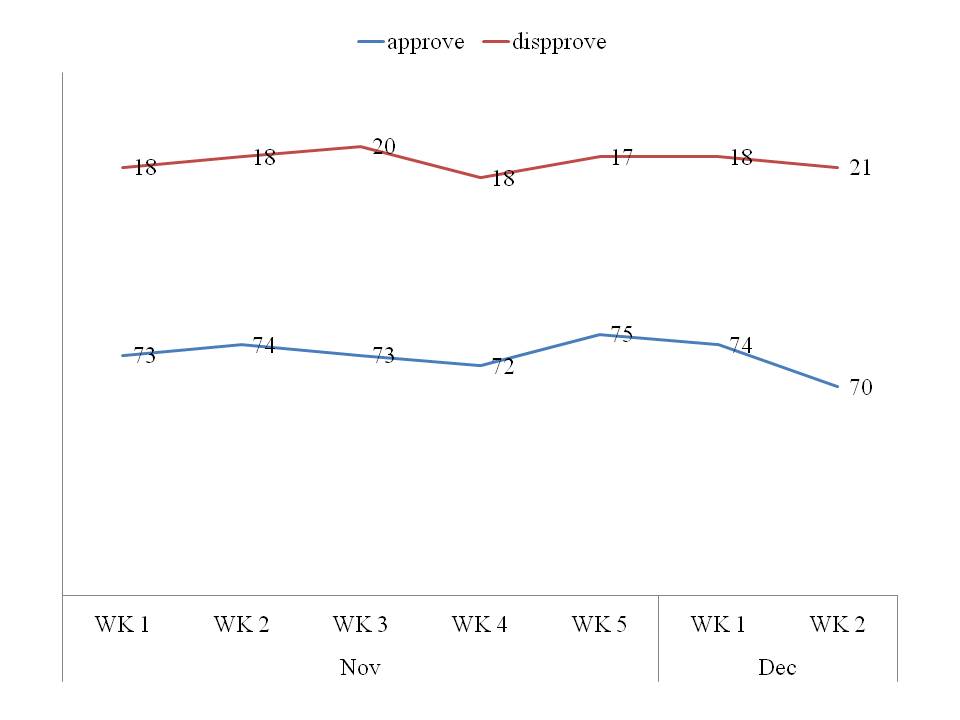 Fears of a speculative bubble and the consequences of a monolithic shadow economy have pushed the government to announce the following regulatory measures:[10] 1) requiring cryptocurrency investors to use their legal name; 2) requiring the use of commercial banks for cryptocurrency holdings; 3) requiring separate storage of cryptocurrency users; 4) prohibiting trade by under-aged individuals and foreigners residing outside of Korea.[11] Financial institutions were also barred from the acquisition and investment of cryptocurrencies, though individuals are permitted to continue trading.[12]

The National Parliament finally reached a deal on next year’s KRW 428.8 trillion budget during the early hours of Dec 6. The KRW 428. trillion budget was also coupled with an increase in corporate tax to 25% from the previous 22%.[15] It is estimated that 129 companies will be impacted by this increase with 77 of those corporations looking at paying an additional KRW 2.3 trillion after the law comes into effect.[16]

18 While there has yet to have been extensive coverage on this Act, the issue of dating violence has become a significant social issue widely reported by multiple outlets.