On Jan 17, the two Koreas continued the working-level dialogue in preparation for the February Winter Games. The key issues of discussion included the joint women’s ice hockey team, joint-entrance, and size of the North Korean visiting delegation.[1]

Many observers are concerned that the Pyeongchang Olympics is turning into ‘Pyongyang Olympics’[2] with many critics claiming that North Korea is trying to steer the spotlight of the Winter Games away from South Korea towards Pyongyang. The South Korean government has also received criticism about its decision to form a joint hockey team without prior consultation with athletes.[3]

While South Korea postponed the previously scheduled joint military exercise in February to build a warmer atmosphere ahead of the Winter Games, North Korea rescheduled the official Army Building Day parade from April 25 to Feb 8, which is a day before the opening ceremony of the Winter Olympics.[4]

On Jan 18, Ahn Chol-soo, leader of the People’s Party (PP) and Yoo Seong-min of Bareun Party (BP) agreed to join and form a single party.[5] Tentatively named the New Unified Reform Party, the newly formed opposition is expected to amass 16.4% support.[6] This may mean that the newly formed opposition could overtake the Liberty Korea Party (LKP) as the second largest party in the National Assembly. The new party has yet to determine its leader. Members of the PP opposing the merger announced that they will establish an alternative party called the Democratic Peace Party.[7]

President Moon Jae-in’s support rate sank to 64%, which is the lowest since he took office.[8] The fall in approval is prominent among young voters (in their 20’s~30’s). Two main factors seem to have driven the decline. First, the decision to regulate domestic cryptocurrency exchange[9] and second, the decision to form a joint ice-hockey team. 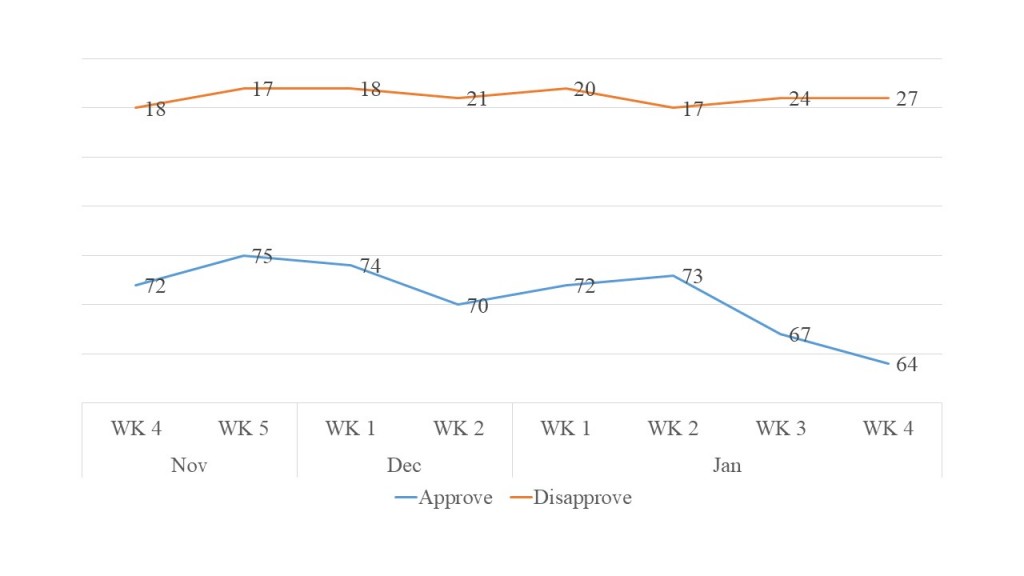 The Ministry of Land, Infrastructure, Transport and Maritime Affairs (MOLIT) announced on Jan 22 that it intended to produce separate policies and regulations for two strategic industries in Korea’s plan for the “4th Industrial Revolution:” smart cities and drones.

Smart cities refer to the use of ICT and big data for solving urban planning problems, such as transportation and environment. The MOLIT stated that it would loosen existing regulations. The changes will only impact urban infrastructure, leaving aside personal privacy and aviation safety.[10]

The MOLIT also announced that it intended to ease regulations surrounding the use of drones, hoping to increase interest in the technology. This involves finding a balance between ensuring public safety and freedom in drone usage. The Ministry also announced that it planned to work with the industry to create a national brand, “K-Drone.”[11]

Blind Hiring in the Private Sector

With the government’s public sector employment expansion in full swing, the private sector has also increased the number of positions that it plans to fill through “blind hiring.” 22.7% of companies surveyed by Saramin stated that they will not consider academic specifications or work experience for their new hires.[12]

45.7% of surveyed companies planned to emphasize fit, positive mindset, perseverance, and passion as the defining qualities for new hires.[13]