On Feb 27, former President Park Geun-hye’s was sentenced to 30 years in prison and was charged with 18.5 billion won fine.[1] She was convicted of 18 charges including bribery and abuse of authority.[2]

Summits with North Korea in April and May

President Moon’s special envoys visited North Korea from March 5-6. Kim Jong Un stated that he is willing to discuss denuclearization and not conduct additional tests until the summit.[3]

The third Inter-Korean summit is scheduled for the end of April.[4] President Moon also made clear that he has no intention of easing sanctions ahead of the summit and reaffirmed his opposition to nuclear weapons on the Korean Peninsula.[5]

On Mar 9, South Korean national security advisors announced that Kim Jong Un expressed a willingness to meet President Trump and that Trump also agreed to a meeting in May. Although the surprising announcement was welcomed in South Korea, the opinion is split among those who support and oppose these latest developments.[6] On the one hand, some experts point to the past history of talks with North Korea and argue that Pyongyang has never bargained in good faith. Others claim that South Korea and the US should use the opportunity to talk to the North.[7] 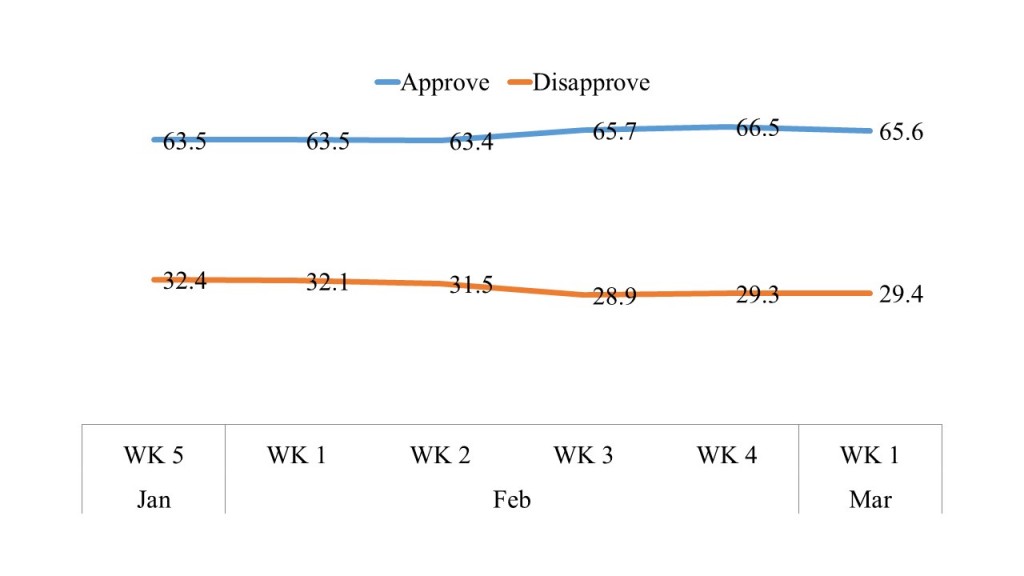 President Moon’s approval rating has remained steady at the mid-60s. Even though the administration has recently announced major diplomatic breakthroughs with Pyongyang, the president is facing some challenging conditions in the economy and domestic political environment. First, the Blue House has not had a good response to the Trump administration’s recent decision to raise tariffs on steel and aluminum imports. Secondly, two prominent figures of the ruling Together Democratic Party (TDP), Ahn Hee-jung and Jeong Bong-ju (former Rep), have been accused of sexual misconduct. Mr. Ahn has resigned from his position as the governor of Choongnam province and Mr. Jeong’s planned bid for the Seoul mayoral race now appears dubious.

US Tariff on Steel and Aluminum

On Mar 8, the Trump administration announced new tariffs on steel (25%) and aluminum (10%). While the second and third order impacts are yet unclear, the stock price for South Korea’s largest steel company, POSCO, fell by 3.6% on the day of this announcement. 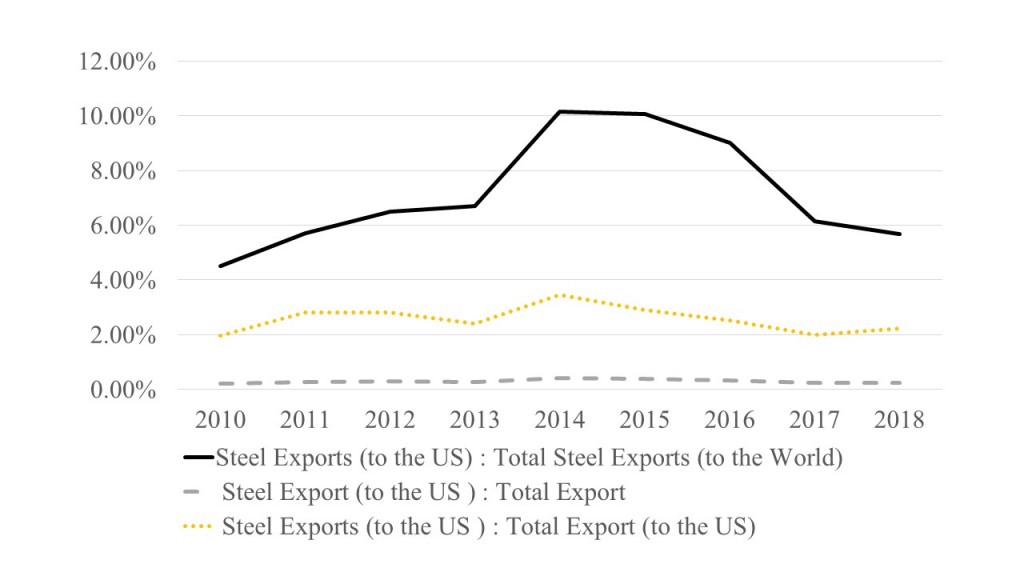 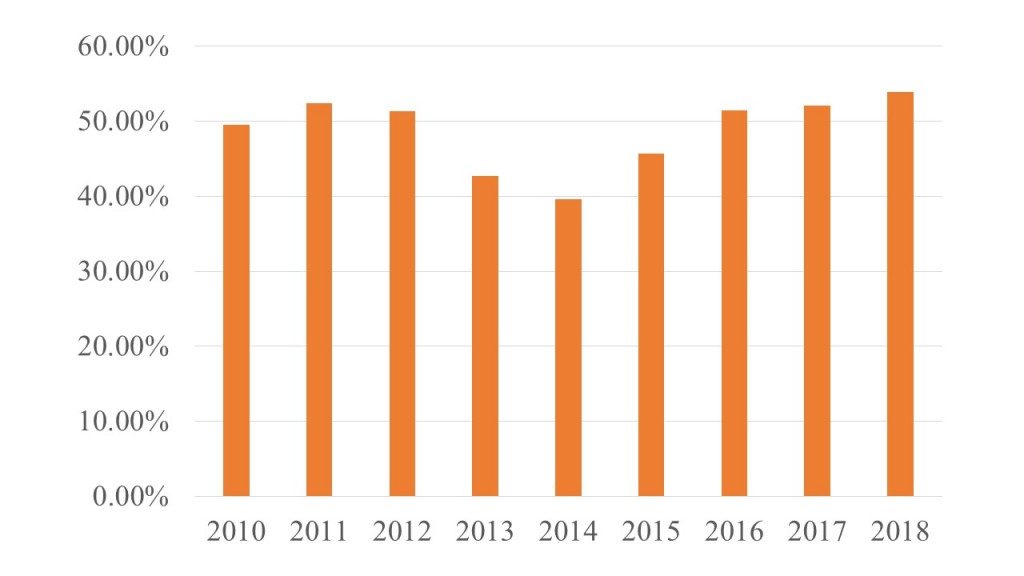 On Feb 27, suspicions of mismanagement further aggravated the ongoing crisis involving GM Korea. Assemblyman Ji Sang-wook of the Bareun Party stated that the company is like to have recorded KRW 1.14trn in profits during 2014~16 rather than the KRW 1.97trn deficit during that same period.[10] The Fair Trade Commission stated that it would investigate GM Korea for potential violation of the Fair Transactions in Subcontracting Act on the grounds that it knowingly imposed losses on subcontracting companies. Additionally, the Financial Supervisory Service stated that it would begin a special tax investigation and audit GM Korea to further substantiate these claims.[11]

Meanwhile, workers for GM Korea have been asking both the government and GM to shield them from the fallout of financial mismanagement. They have also been lobbying the National Assembly to install legislative safeguards to prevent recurrence of similar events.[12]

Amendments to the Labor Standards Act

Amendments to the Labor Standards Act which limits working hours from 68 to 52 hours-a-week is taking a toll on manufacturing. Factory owners have been complaining that legislators went forward with the amendment without knowing how the factories operate. Fewer working hours means that productivity is lowered and fixed cost account for larger share of the total cost. The problem appears especially acute for SMEs.

The Korea Economic Research Institute (KERI) estimated that the amendment will cost approximately KRW 9.4trn. Manufacturing companies are expected to shoulder the greatest share of the burden since 60% of their operating cost is labor, (~KRW 4.4bn).[13] The Korea Federation of Small and Medium Business requested that the government consider changes to the amendment.[14]

Korea Development Bank (KDB), currently the majority shareholder in Kumho Tires, announced that it is planning to unload its shares to the Chinese tire firm, Doublestar. This elicited a fervent response from Kumho Tire employees. Yet Kim Jong-ho, Chairman of Kumho Tire, stated on Mar 7 that there was no reason to oppose this move.[15]

Kakaobank, an internet bank started by the Kakao Corporation, announced that it will increase its volume of publicly listed shares by KRW 500bn – a sign of sustained expansion from the rapid growth it enjoyed since opening in July 2017.[16] The shares will be available on Apr 25. The bank’s net worth is expected to grow by KRW 1.3trn.[17]

Sungdong Shipbuilding & Marine Engineering Co., a Korean shipyard that at its height reached the world’s top eight, has been tapped for government-led restructuring. The company received approximately KRW 4trn in government financing over the past eight years, but performance problem has led the government to intervene. The decision signals a change in policy, which often upheld public financing of shipbuilding firms.[18] Sundong’s majority shareholder is the Korean EXIM Bank.[19]