On June 5, the South Korean government decided to provide $8 million in humanitarian aid to North Korea. The money will be used by the World Food Programme and UNICEF to deliver food to women and children within North Korea.[1] The delivery of this aid was delayed since 2017 due to sanctions and disagreements within South Korea.

South Korean Defense Minister Jeong Kyeongdoo and US Acting Secretary of Defense Patrick Shanahan met on June 3 to discuss the future of ROK-US alliance and OPCON transfer. Both sides agreed that South Korea’s four-star general will lead the Combined Forces Command (CFC) following OPCON transfer.[2] The CFC is currently led by an American commander with a South Korean deputy commander. Progressive observers regard OPCON transfer as a necessary prerequisite for protecting South Korea’s sovereignty. Conservatives believe that South Korea’s dependence on the US for its defense will not decline as a result of this process. Experts argue that the US is likely to demand a further increase in South Korea’s share of defense costs in order to meet the needs of OPCON transfer. The transfer is expected to be completed by 2022.

On June 12, President Moon delivered a speech at the Oslo Forum in the University of Oslo. He emphasized “Peace for People” as a way to advance peace on the Korean Peninsula.[4] He stated that it is possible to hold a fourth inter-Korean summit by the end of June, before President Trump’s visit to South Korea. Minister of Unification Kim Yeon Chul, however, mentioned in Seoul that it would be difficult for the fourth inter-Korean summit to take place in June.[5] President Moon is expected to deliver another speech on denuclearization in the Swedish parliament in Stockholm.

North Korea on the Move

In the meantime, Kim Jong-un sent a letter to President Trump. He also sent his sister Kim Yo-jong to Panmunjom to deliver a message of condolence and flowers to pay respect to Lee Hee-ho’s death on June 10. Ms. Lee was the ex-first lady and wife of President Kim Dae-jung.

The President will nominate one candidate and the chosen nominee will go through National Assembly hearings before the final appointment.[7] The nomination is likely to take place after June 16 upon President Moon’s arrival from his state visit to Scandinavia. The incumbent prosecutor general will step down on July 24.

President Moon has been emphasizing the need to limit the investigative powers of prosecutors and experts expect considerable changes under the new leadership in the Ministry of Justice.

According to the latest data released by Statistics Korea (KOSTAT) on June 12, the number of employed persons totaled 27.3 million in May, is a 259 thousand increase year-over-year. The employment rate for people aged 15-64 also increased by 0.1 percent from a year earlier to 67.1 percent last month. This is the highest figure in May since the agency began compiling such data in 1989. The numbers indicate that the increase was mainly led by increased employment among 60-or-older workers, which grew by 354 thousand persons from a year ago. However, employment among people in their 30s and 40s fell by 73 thousand and 177 thousand persons from a year ago, respectively. KOSTAT official cited the sluggish manufacturing sector as the main reason for the significant decline in the number of employed in their 40s. Job creation in the manufacturing sector shrank 73 thousand in May from a year earlier. Jobs in the finance/insurance and public administration contracted by 46 thousand while defense and social security sectors also decreased by 40 thousand. The figure grew in the health and social welfare service (124 thousand), lodging and restaurant service (60 thousand), and the arts, sports and leisure (47 thousand).[8] 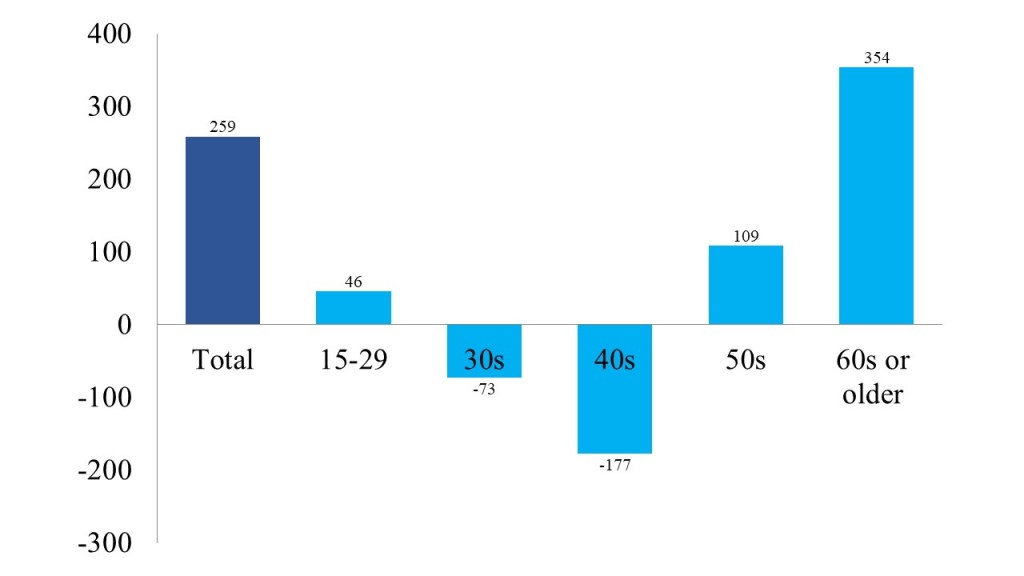 As of June 10, the number of 5G mobile network subscribers in South Korea has exceeded 1 million. The number of 5G base stations increased to 61,246 across the country.[9] Samsung Electronics has also opened a new research center called the Advanced Communications Research Center under the Samsung Research division to begin R&D on 6G technology.[10]

On June 10, South Korea and the UK have signed a preliminary agreement on free trade between the two countries to maintain stability after Britain leaves the European Union (EU). The agreement allows businesses of the two countries to continue to enjoy preferential terms under the existing Korea-EU FTA after the Brexit – even in a no-deal case.[12]