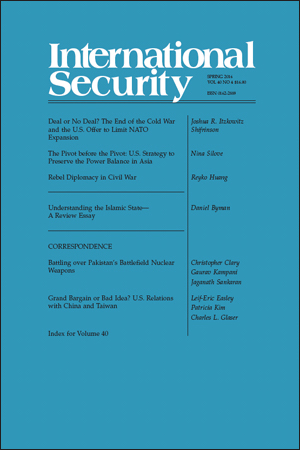 Professor Easley’s contribution to the academic and policy debate on whether the U.S. should accommodate China was published in the journal, International Security. Easley rebuts Charles Glaser’s proposal to abandon Taiwan, in part by explaining the importance of South Korean views on regional security:

“Glaser writes that Taiwan is the only dispute important enough to bring the United States and China into conflict, but the divided Korean Peninsula remains an area where the two could clash in, for example, a contingency precipitated by a North Korean attack or a race to secure nuclear weapons and fissile material during post-collapse stabilization missions. When political change comes to North Korea, China should be integral to processes of peaceful denuclearization, economic integration, and eventual unification, but Washington’s interests will be tied to close cooperation with Seoul and Tokyo. It would be extremely counterproductive if damaged U.S. credibility motivated leaders in Beijing to expect (and those in Seoul and Tokyo to fear) a U.S.-China deal to seal the fate of Korea…A grand bargain with China would not only degrade U.S. soft power and alliances; it could drive Asian countries to unilaterally enhance their own defenses, fueling an arms race and further diminishing security in the region. Glaser suggests that such dynamics could be avoided if U.S. leaders visit Japan and South Korea with security treaties in hand and clarify why those countries are different from Taiwan. Alliances among democracies are based not only on treaties and national interests, however, but also on shared values and popular support. Perceptions of reliability affect how people vote and can redirect democratic processes behind alliance cooperation,” (p. 183).