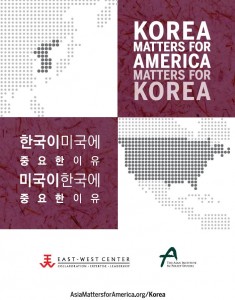 Produced jointly by the Asan Institute and the East-West Center in Washington, DC, Korea Matters for America/America Matters for Korea is a reflection on and celebration of the deep ties that bind the Republic of Korea and the United States. This publication highlights several aspects of ROK-US relations, including the strategic alliance, economic relations, and people-to-people exchanges. In addition, it provides an interactive resource for credible and nonpartisan information, graphics, analysis, and news on partnerships between diverse regions and cities in the Republic of Korea and the United States.

This launching event will feature distinguished leaders, experts, and policymakers from the Republic of Korea and the United States, including Sung Kim, Ambassador of the United States to the Republic of Korea; Amy Jackson, President of the American Chamber of Commerce; Kim Jae Chang, President of the Council on Korea-US Security Studies; Hwang Jin Ha, Member of the National Assembly; Kim Jong-hoon, Member of the National Assembly; Chun Yungwoo, Senior Advisor of the Asan Institute; and Satu Limaye, Director of the East-West Center.

*This event is by invitation only.
*Simultaneous English/Korean interpretation will be provided.
*Due to limited parking spaces available, please use the nearby parking facility at the Seoul Museum of History or use public transportation to the Asan Institute if possible.