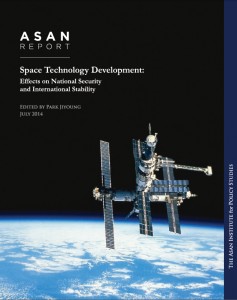 Space technology cooperation has beneficial effects on national security and international stability. However there are some roadblocks to international cooperation on space technologies, even though it can help with national security priorities. There are different values placed on various space programs, as well as different budget levels. Also, there is still a sense that technologies related to national security have to be maintained control over, so there is Executive Summary some unease about sharing information or collaborating internationally on national security types of programs. Transnational security threats require transnational answers. The multiplication of non-state actors and non-state threats on the international scene demands new measures from national and transnational decision makers. In today’s globalized world, it is mostly not useful to tackle security challenges from a national point of view, since many of these go far beyond national influence and require effective multilateralism in order to be handled appropriately. International cooperation has therefore become crucial in order to respond to today’s global challenges. Space-based intelligence is an important tool to affront this new reality. As an effective example of international space cooperation, the European Union Satellite Center and its use of geospatial information for crisis management is introduced. The EU Satellite Centre takes an important role as an operational entity that provides security-related analysis to support the decision making process. The EU Satellite Center, in particular, has become a very vital part of EU military strategy and national defense due to their high performance and guaranteed operational autonomy. The SatCenter engages in educational training to empower analysts with skills and knowledge and also participates in space and security programs. The existence of the SatCenter, the EU’s only multinational operational entity in the area of space and security, has considerably strengthened the EU’s multilateral approach to conflict management. The increasing relevance of space technology development to states, which carry significant strategic, economic, and commercial implications, is a central issue in the national security of states. Space power will be instrumental in 21st century Southeast and Northeast Asian diplomacy, strategy, and geopolitics. National security and economic policy makers in the region must begin to treat space power issues as core strategic interests. While space contestation is increasing, given its importance, the world is simultaneously evolving into a multipolar order, where a greater number of forces, ideas, and technologies threaten stability in space cooperation. In this regard, the areas of space development are not exceptional in reducing potential threats and sustaining stability. International society has the most pivotal responsibility to take part in this ongoing progress. Under these circumstances, the importance of strong policymaking, statesmanship, and cooperation both at the national, international, and industrial level should be stressed. This endeavor is a decades-long process in which all the related entities and actors must contribute with practical solutions.

With the escalation of space competition among four nations of Northeast Asia, Korea has launched a rigorous space technology development program since the 1980s under the strong lead of the national government. In order to create an environment for sustainable space technology development, strong governmental leadership, national economic capability, consensus and a support from the general public, and voluntary investment from the private sector are crucial. Space development in Korea is controlled by the national space development plan that goes up to 2025 with the vision of promoting the peaceful use and scientific exploration of outer space, ensuring national security, and contributing to the growth of the national economy. Korea has been successful with satellite development and finally was able to take full responsibility in KOMPSAT-3 development. With the completion of a test facility in the Naro Space Center, Korea will proceed to obtain the technical capability to become a superpower in space launchers. At a national level, technology policymaking is complicated on account of the relationship with national security. Prioritization and trade-offs that are needed for resource constraints are impediments to successful implementation and sustainable space development.