The Minister of Foreign Affairs, Kang Kyung-wha, stated that North Korea sent a letter to the International Paralympic Committee (IPC) stating its intention to participate in the PyeongChang 2018 Paralympic Winter Games.[1] President Moon Jae-in firmly believes that North Korea’s participation in PyeongChang Winter Olympic game will provide a momentum for peace on the Korean Peninsula.[2]

There is a good chance, however, that North Korea may not be sending its team to the Winter Games given that the country has yet to complete the official registration process. Moreover, the US-ROK is likely to conduct its annual joint military exercise (i.e. Key Resolve) during the time of the PyeongChang 2018 Games.[3]

President Moon’s approval rating has precipitously declined since his inauguration in May. The drop in support can be explained by a number of factors. One is his inability manage the North Korean problem.[5] North Korea has managed to conduct the sixth nuclear test and rounds of missile tests giving the president little choice but to expedite the environmental review on THAAD and increase military readiness and cooperation with the US and Japan. These measures, however, have done little to lower tensions on the Korean Peninsula. The second contributing factor may be the administration’s intervention in the investigation of former President Lee Myung-bak. Although the public appears to generally support this move, some observers have criticized the Blue House for using the investigation as a tool to punish the opposition parties. Finally, the president is facing some criticism for failing to fill key posts in the Constitutional Court while instituting reforms that he promised during the election.[6]

On Oct 19, the Bank of Korea (BOK) revised its growth forecast for 2017 to +3%. Despite China’s “THAAD Retribution,”[7] the new estimate is 0.2% higher than the previous forecast. The gain appears to be driven in part by an increase in domestic consumption and rise in export revenue.[8] The BOK also points to the dramatic increase in domestic capital investments.[9] Year-to-year investment in construction of factories and machines, in particular, grew from +2.5% in January to +14% in October. 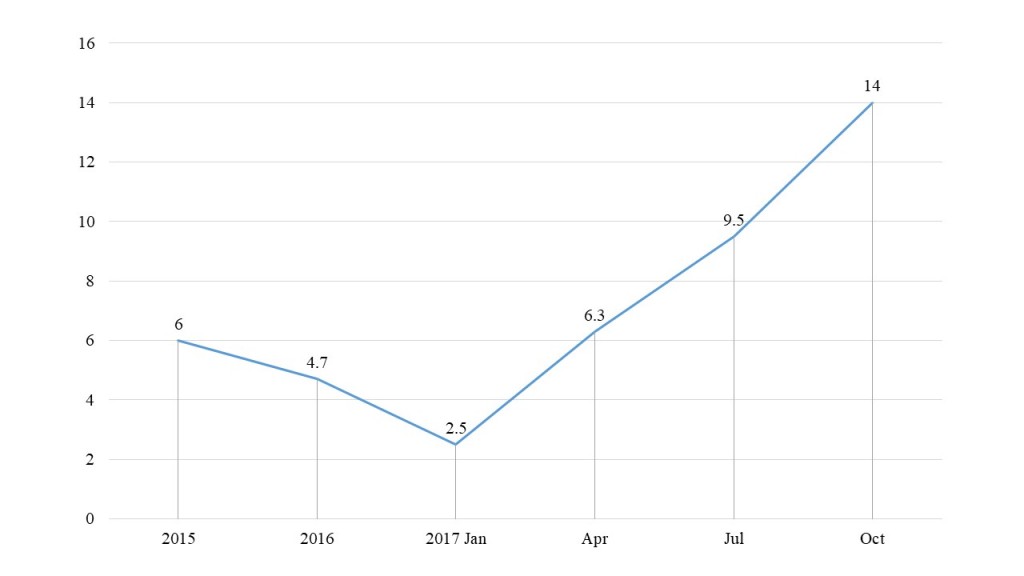 The BOK also identified certain risk areas for 2018, which includes a possible change in trade relations with the United States, change in monetary policies among major trade partners, and the geopolitical risks associated with the North Korean crisis.[10]

On Oct 18, the Moon Administration proposed the Five-Year Plan on Job Creation, which focused on approaches to improving Korea’s labor market. The plan called for (1) building job-creating infrastructure, (2) increasing public employment, (3) increasing private sector employment, (4) improving the quality of jobs, and (5) providing customized support for finding employment. Pursuant to these five approaches are 10 major task groups, 100 policy actions to achieve those tasks and a price tag of KRW 8.6trn in central government expenditure and KRW 8.4trn in provincial government spending. The Moon administration also proposed that the plan will focus on invigorating socioeconomic development over the profit-driven enterprise, creating a sharing economy that emphasizes regionally inclusive job creation.[11]

Aspects of the plan scintillated debate, such as the proposal to increase public sector jobs by 810,000. This includes the mandate to transition 200,000 temporary workers into permanent employees in the public sector. While the plan features a prominent role for the private sector, there is little detail as to how firms will be encouraged to take part in this endeavor. President Moon has proposed readjusting the economy to initiate the Fourth Industrial Revolution but it is less than clear as to how the administration intends to achieve this objective.[12]