In the aftermath of the crackdown on Dandong Hongxiang Industrial Development Company, the United States and South Korea have begun to consider tightening sanctions on North Korea. Specifically, officials from both governments have identified tourism as an important source of funding for North Korea’s nuclear weapons program. In 2015, around 100,000 tourists visited North Korea, providing a significant sum of cash to the Kim Jong-un regime. One study estimated that North Korea profited between $40 to $50 million.1

According to the Korea Trade-Investment Promotion Agency (KOTRA), North Korea aims to increase the number of tourists to one million every year until 2017, and to two million by 2020.2 Profits coming from tourism could provide an important source of capital for the heavily sanctioned and cash-strapped country. If the United States and South Korea were to implement sanctions on North Korean tourism, however, they are likely to face opposition from China, given that 90% of tourists to North Korea are Chinese.

Foreign Minister Yun Byung-se also revealed during his meeting with US Ambassador to the UN Samantha Power that South Korea is considering independent sanctions on North Korea as well. Minister Yun added that the sanctions in consideration will be much stronger than the earlier sanctions that shut down the Kaesong Industrial Complex permanently.3

Oct. 10 marked the 71st anniversary of the founding of the Workers’ Party of Korea (WPK). Experts anticipated another major provocation leading up to this event, but North Korea refrained from any major action. On Oct. 15 and Oct. 20, however, it test fired two Musudan missiles—the 7th and 8th of its kind. Both missiles exploded soon after launch.4

The two missile launches were met with strong criticisms from both the United States and South Korea. Mr. Park Jie-won, floor leader of the People’s Party, criticized Kim Jong-un for “playing with fire” and for limiting options for South Koreans who support engagement with North Korea. He urged Kim to “come back down to earth.”5

Meanwhile, South Korea and the United States conducted a joint military exercise, Invincible Spirit, beginning on Oct. 10. The six-day exercise involved 7 US naval vessels (including the USS Ronald Reagan), 40 South Korean warships (including Sejong the Great), and numerous aircraft. The exercise took place in the three bodies of water surrounding South Korea and involved, among others, precision strike drills against North Korea’s military facilities as well as naval operations to detect and destroy North Korean submarines.6

On Oct. 19, South Korea and the United States also agreed to launch a high-level dialogue on extended deterrence. The decision to launch the Extended Deterrence Strategy and Consultation Group (EDSCG) was a product of the two-plus-two meeting between South Korean foreign and defense ministers, Yun Byung-se and Han Min-koo, and their US counterparts, Secretary of State John Kerry and Defense Secretary Ashton Carter. While specifics of EDSCG remain unknown, the dialogue is likely to be conducted at the ministerial level. Some have raised concerns that the EDSCG may conflict with other institutional mechanisms such as the Extended Deterrence Policy Committee (EDPC) and the Deterrence Strategy Committee (DSC).7

On Oct. 7, a Chinese boat rammed into a South Korean Coast Guard vessel that was trying to capture another Chinese fishing boat for entering South Korean waters.8 While none of the Coast Guard were injured, the vessel capsized and the incident caused an uproar in South Korea. Around 40 Chinese boats that were fishing illegally in Korean maritime territory are known to have fled the scene.

On Oct. 19, China announced that it is investigating the incident in accordance with Chinese law and is searching for the responsible vessel.12

A McKinsey report on restructuring in the shipbuilding industry suggests selling or breaking up Daewoo Shipbuilding & Marine Engineering (DSME).13 Highlighting the principle of “private sector-led voluntary restructuring,” the Korean government solicited a third-party restructuring plan rather than designing one on its own. This report was commissioned by the association of shipbuilding firms for release in August.14

DSME, however, rebutted that the report is based on misguided assumptions and evidence. Clarkson’s Sept. report shows a rosier outlook. Clarkson forecasts that the big three companies would have contracts to build 750 ships over the next five years (2017-2021). This is significantly larger than McKinsey’s estimate of 550 ships.15 The different estimates are based on varying market prospects. Clarkson expects the industry to rebound globally as of 2018 while McKinsey estimates the recovery to begin after 2020.

DSME also criticized the McKinsey report for failing to provide new insights or recommendations.16 The company was especially critical of the short-sightedness of the report in recommending that DSME sell off the offshore plants.17 This recommendation is especially puzzling given that McKinsey recommended increasing investment on offshore operations only three years ago. One of the main reasons that the DSME has had to contend with its debt problem is that the company had followed through on this previous recommendation.18

With strong opposition from DSME, the Korea Offshore & Shipbuilding Association (KOSHIPA) is reviewing the draft of the McKinsey report.19 There is a growing concern that the government has neither taken full responsibility for the restructuring effort nor delegated the authority to the private sector. Meanwhile, both Samsung and Hyundai Heavy Industries have questioned whether the government’s true intention is to save DSME.20 Some news reports suggest that the government itself is split with the FSC, reportedly agreeing with the Clarkson report while MOTIE is siding with McKinsey.21

Park’s approval rating has hit the bottom at 26%.22 Diplomatic turbulence caused by THAAD deployment and North Korea’s nuclear tests coupled with the economic downturn and Park’s unresponsive attitude over corruption suspicions on her close confidantes are all said to account for the recent dip.23 In the grand scheme of things, however, this is a typical pattern. The sitting president often loses public support in his/her fourth year under accusations of corruption scandals involving the president or his/her family and confidantes.24 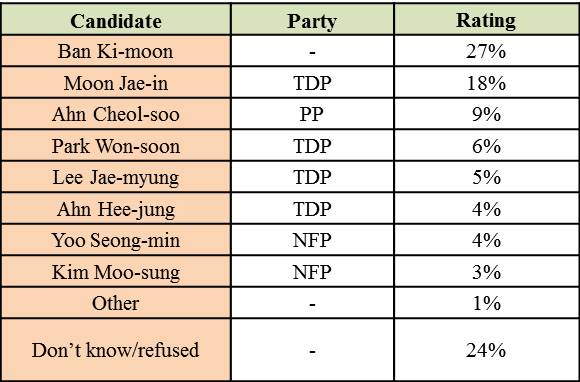