Rumors about an “invisible hand” influencing executive decision-making in the Blue House has been confirmed through the surprising revelation of Ms. Choi Sun-sil and her relationship with President Park. The smoking gun was the investigation of the Mir Foundation and K-Sports Foundation. Ms. Choi Soon-sil, a longtime close friend of President Park, is believed to have been meddling in state affairs and using her relationship with the president for personal gains (see Timeline and Key Players).

The public outrage and ensuing protests have resulted in President Park offering two public apologies. The first apology came on Oct 25 when she admitted that she allowed Ms. Choi to edit her speeches during her presidential campaign in 2012. She also acknowledged that she had shared other documents with Ms. Choi soon after becoming president. In her second apology on Nov 4, she took full responsibility for the scandal and stated that she would cooperate with the investigation. Approximately 100,000 people took to the streets in central Seoul to demand President’s Park’s resignation the day after her second apology.

If President Park decides to see through her term, this scandal is likely to further cement her lame duck status. Most members within the NFP have also begun to dissociate themselves from the president. An internal conflict between the pro-Park and anti-Park camps may even lead to a split within the party, which will have a significant impact on the coming election scheduled to take place in December 2017.

The Fate of the NFP

The NFP appears deeply divided on the issue of changing party leadership. Anti-Park members have asked Lee Jeong-hyun, a prominent pro-Park member and the leader of the party, to resign after the scandal became public. With deteriorating public support, nearly half of 129 members are believed to be demanding Lee’s resignation.3 Kang Seok-ho, the only non pro-Park member within the leadership, has stated that he will resign if Lee does not step down.4 The floor leader Jung Jin-seok also stated that he will resign as soon as the next year’s budget is passed and a new cabinet is stabilized.5 With some members indicating their desire to leave the party, observers are claiming that a new conservative party is likely to emerge from this ordeal.6 However, experts state that there will be no massive defection in the short term as there is no clear front runner to lead the new party should an NFP offshoot materialize.7 The key will be how quickly the NFP can reformulate its platform and reinvent itself to become a more legitimate political force for next year’s presidential election.

There are voices calling for the president’s impeachment or resignation. But most party leaders are less than enthusiastic about these prospects given that there a great deal of uncertainty about what would happen next should President Park vacate her position. For now, the installation of an interim party-neutral cabinet is the most likely scenario. But the major parties have yet to agree about what this kind of government would look like. Take for instance, the confirmation fiasco surrounding President Park’s new nominee for the Prime Minister position – Mr. Kim Byung-joon. The NFP has expressed its support for Mr. Kim but the three opposition parties are opposed. The opposition is largely due to President Park’s role in the selection process. They are demanding that the president be removed from the process to formulate a new cabinet.8 The opposition parties also agreed to demand the formation of a special prosecution unit and launch a special investigation into the administrative affairs related to the recent scandal.9

There are disagreements, however, among the opposition parties about what to do next. For instance, the TDP has suggested that it will launch a movement calling for President Park’s resignation unless she relinquishes her executive power over state affairs.10 The PP is demanding that President Park leave the NFP and discuss the nomination of a new prime minister with three opposition party leaders.11 The Justice Party urged President Park’s resignation and called for an earlier presidential election after forming the interim cabinet.12

In the midst of political chaos in South Korea, it was reported that North Korea would test another Musudan missile during the first week of November.13 If it does, it would be the 9th test of its kind this year. The two previous tests came last month after North Korea celebrated the 71st anniversary of the founding of the Workers’ Party of Korea (WPK) on Oct 10. It is possible that the North may refrain from conducting another test given the political turmoil in the South and the lack of attention it would receive.

Meanwhile, the United States dispatched an anti-ballistic missile detection radar system known as SBX (Sea-based X-Band Radar) to the Korean Peninsula in late September. The radar was dispatched to monitor a possible long-range missile launch by the North. The radar recently returned to its base in Hawaii after a month of work. In response, South Korea’s Ministry of Defense stated that it could not comment on an operation conducted by the United States.14 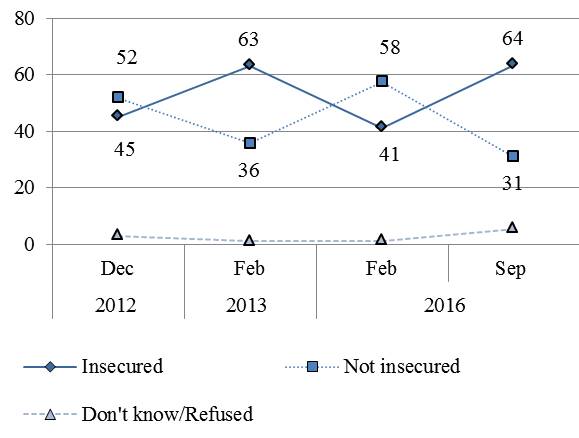 The Ministry of Strategy and Finance released its final restructuring plan for the shipbuilding and shipping industry. The government is expected to order over 250 vessels by 2020 worth KRW 11 trillion, help the companies restructure their business, and provide assistance for displaced workers.17 The government also agreed to invest KRW 1.7 trillion by 2017 to stabilize the regional economy where the shipbuilding industries are located.18 For the shipping industry, the government is offering financial assistance (KRW 6.5 trillion) to help businesses acquire ships at competitive prices.19 The recent announcement has led many critics to point out that the content overlaps with the three companies’ voluntary restructuring plan announced last June.20

The most controversial part of the restructuring plan is whether to sell or break up Daewoo Shipbuilding & Marine Engineering (DSME). The government was silent on the details about this issue. Given that the creditors will play a critical role in the restructuring effort until 2018, DSME is expected to remain in the market for the time being.21 The move is seen as kicking the can down the road for the next administration which is due to arrive in 2018.22

July 18: Chosun Ilbo reports that Mr. Woo Byung-woo, who served as Presidential Senior Secretary for Civil Affairs at the time, abused his position of power for his family’s economic benefit.23 Other media outlets report that he also used his position to benefit his son, who received a lightened military service duty and an internship at the National Assembly. Mr. Woo is also alleged to have embezzled funds from a real-estate company run by his family and lied about his net worth.

August 17: MBC reports that Mr. Lee Seok-soo leaked the details of the ongoing investigation into a Chosun Ilbo reporter.

August 19: The Blue House accuses Mr. Lee Seok-soo of committing a serious crime and for “shaking the country’s foundation.”26

August 29: Mr. Lee Seok-soo offers his resignation after his office was raided by prosecutors for allegedly leaking classified information.27

September 26: Hankyoreh reports that Ms. Chung Yoo-ra, the daughter of Ms. Choi Soon-sil, was receiving preferential treatment at Ewha Womans University and that she was now in Germany preparing for the 2020 Tokyo Olympics.30 It later became known that funds from foundations like K-Sports had been funding Ms. Chung’s training in Germany.

October 19: Professors at Ewha Womans University hold a rally, joining the thousands of Ewha students, asking for the university president Choi Kyung-hee to resign. She complies.31 It was also around this time when Ms. Chung Yoo-ra’s post on her SNS account was publicized by the press. In her post, she wrote “If you do not have enough talent, blame your parents. Stop criticizing my parents for having money. Having money is also a talent.”32

October 25: President Park apologizes to the public for letting a “close friend” advise her on speeches during her presidential campaign. She also admits that she shared documents with her friend after she entered the Blue House.33

October 28: Mr. Lee Seung-cheol admits that Mr. Ahn Chong-beom pressured him to collect contributions from major corporations for the establishment of Mir Foundation and K-Sports Foundation.34

November 3: President Park issues a second public apology in two weeks. She states that “everything was her fault” and that she is willing to cooperate with any investigation.36

November 5: Around 100,000 South Koreans demonstrate in the streets of central Seoul asking for President Park’s resignation.37 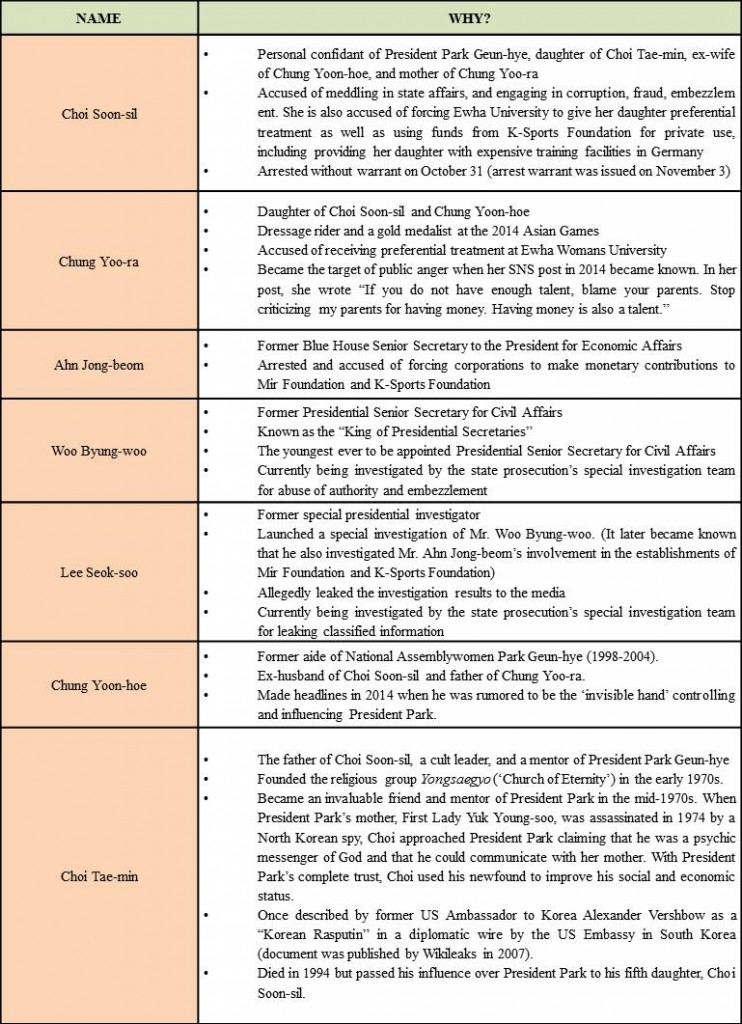