The Ulchi Freedom Guardian (UFG), which began on Aug 21 is scheduled to end on August 31. A total of 17,500 US troops and 50,000 ROK soldiers participated in this year’s exercise. Also in attendance were Admiral Harry Harris (US Pacific Command – USPACOM), General John Hyten (US Strategic Command – STRATCOM) and Samuel Grieves (Missile Defense Agency – MDA). This was the first time that these many top level US military leaders were present for the UFG.

President Moon stressed that the UFG is a defensive exercise without the intent of increasing military tensions on the Korean Peninsula.[1] North Korea responded by saying that the exercises could trigger a nuclear war.[2] Although the US and ROK have carried out joint annual military exercises since 1969, this year’s exercise gained much attention amid rising tensions on the Korean Peninsula. Several progressive NGOs including the People’s Solidarity for Participatory Democracy and  Solidarity for Peace and Reunification of Korea gathered in front of the Seoul City Hall to express their disapproval.[3]

On Aug 26, North Korea launched three short-range missiles into the East Sea. The missiles were launched from a site in the northern Gangwon province and traveled approximately 250km.

The missile launches are being interpreted as a response to the UFG.[4] President Moon convened the National Security Council (NSC) meeting shortly after the launch. The meeting concluded that the missile launch did not pose a major threat to South Korea and decided to continue with the UFG exercise as scheduled.[5]

History of DPRK Response to the UFG

Korea Passing or Korea Nothing?

“Korea Passing” is a concept that was first mentioned by Yoo Seung-min during a presidential election debate on April 25. Yoo stated that Korea Passing refers to a situation where South Korea is ignored in important foreign policy decisions that affect the Korean Peninsula. He referred to President Clinton’s decision to not visit Japan on his way to visit China in 1998 as “Japan Passing”.

Yoo stated at the time that he was concerned that the US was discussing important issues related to the Korean Peninsula during his summit meetings with Prime Minister Abe and President Xi Jinping earlier this year. President Moon responded that under his leadership, South Korea will take the lead on issues related to the Korean Peninsula. However, there is a growing concern that this may be wishful thinking given Steven Bannon’s latest comments about a potential deal between the US and China regarding the North Korean nuclear problem. Henry Kissinger also suggested the possibility of negotiating a deal with China that may involve US troop withdrawal from the Korean Peninsula.[6]

Many Koreans are convinced that Korea Passing is a reality. Some even went further describing the situation as ‘Korea Nothing.’[7] Some members of the Together Democratic Party (TDP) and Liberty Korea Party (LKP) have called for the redeployment of the US tactical nuclear weapons to South Korea. The LKP even adopted this policy as part of its platform.[8] The LKP leadership reasoned that balance of terror is the only way to address the growing North Korean nuclear threat.

On Aug 22, South Korea and the US began their first discussion on the possible revision of the Korea-US Free Trade Agreement (KORUS FTA). The joint committee meeting was held for the first time in five years after the KORUS FTA first came into effect. No official decisions were made as both the US Trade Representative Robert Lighthizer and ROK Trade Minister Kim Hyung-chong did not attend the meeting. The meeting was more of an opportunity for senior officials from both sides to share their positions.[9]

The US claimed that KORUS FTA has “led to a dramatic increase in trade deficit” by giving an unfair advantage to the Korean steel and automobile companies. The South Korean side argued that the FTA was beneficial for both countries and they will not consider any amendments without a joint investigation.[10]

The announced changes to the Korean tax code is gaining mixed reviews. A survey conducted by Hankyoreh, for instance, indicates that 85.1% of Koreans support the new tax hike.[11] Many experts, however, have warned that the changes will not guarantee enough revenue to cover the government’s plan to increase welfare spending. Others also warn that companies may be inclined to move their operations to other countries.[12]

As it stands, there are two components of the tax reform as announced by the Ministry of Strategy and Finance on Aug 2. The income tax hike applies to individuals whose taxable income exceeds 500 million won (USD 445,700) from 40% to 42%. The second component is the corporate tax increase from 22% to 25% for companies whose taxable income exceeds 200 billion won (USD177.79 million).[13] The government claims that these changes will generate 6 trillion won (US $ 5.34 billion) per year.[14]

Samsung’s Vice Chairman JY Lee was sentenced to five years in prison for bribery, perjury, and embezzlement.[15] The term is shorter than the 12 years requested by the special prosecution but could still prove to be a damaging blow to the company.

In the first sentence, the court ruled that Lee provided “passive bribes” to former President Park Geun-hye. The court also ruled, however, that Lee did not make an ‘explicit request’ to influence his succession nor the merger of Cheil Industries and Samsung C & T.[16]

The case is far from over given that JY Lee’s legal team is seeking an appeal. 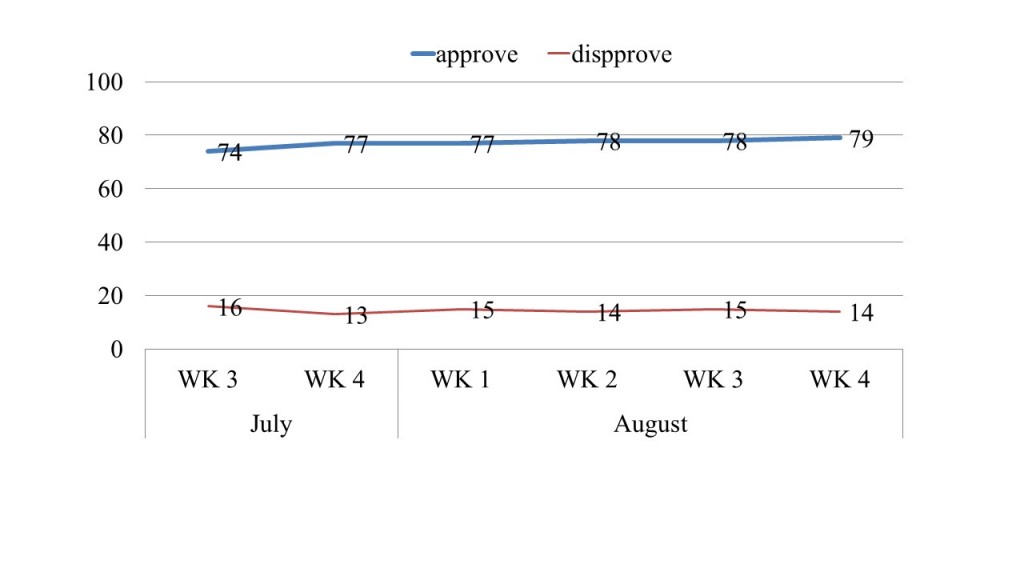