On Sept 23, US B-1B Lancers crossed the Northern Limit Line (NLL). Two B-1B Lancer bombers started off in Guam escorted by F-15C Eagle fighters from Okinawa and flew in international airspace over waters east of DPRK.[1] It is the first time since 1953 that a US bomber flew this close to the North Korean airspace.

However, North Korea refrained from issuing an official statement through its news agency. Experts suspect that the regime did not want its people to discover that the country did nothing while the US bomber crossed the NLL. The South Korean Intelligence Agency reported that the North Koreans could have been unaware that the B-1B was flying into their airspace.[2] There were reports in Seoul that the US carried out the recent maneuver without prior consultation with the South Korean government. The Blue House denied these claims.[3] The incident is fueling suspicion that the US may be planning a preemptive military action against North Korea.

Investigation into the National Intelligence Service (NIS) and Lee Myung-bak

The investigation into the NIS is closing in on the former President Lee Myung-bak. Charges include allegations of political interference, blacklisting artists, and electoral sabotage.[4] In July, the NIS Reform Development Committee created a task force to investigate these allegations. Won Sei-hoon, the former NIS director is being investigated by the prosecutor for being in charge of these operations. Former Minister of Defense, Kim Kwan-jin is also prohibited from leaving the country and is expected to be extradited.

The United States Trade Representative Robert Lighthizer and the South Korean Trade Minister Kim Hyun-chong began the renegotiation of the KORUS FTA on Oct 4 in Washington DC. While details are unknown, experts predict that the US is likely to demand the immediate elimination of tariffs on 547 US agricultural products.[8]

The Moon government faced harsh criticism from the opposition parties for the government’s dealing of the KORUS FTA. Park Ji-won, the former leader of the People’s Party, claimed that the current government was too complacent on its response to the renegotiation talks. Hong Joon Pyo, the leader of the LKP, denounced President Moon and the ruling party for opposing the KORUS FTA.[9] Bareun Party demanded an apology from President Moon for falsely assuring the Korean public that there would be no renegotiation of the FTA.[10]

Internet banking services like Kakao Bank and K-Bank (by the telecom company KT) usually attracts customers with higher credit rankings, with 87.5% of its clientele in the top three credit categories. This may be in part because these financial institutions offer lower interest rates on loans (3.39%) for upper-tier credit rated customers than other commercial banks (3.71%). Potential borrowers with lower credit ratings face slightly higher interest rates (4.79%) than commercial banks (4.51%).[13]

The popular feature of Kakao Bank is its 24-hour service, allowing potential customers to create an account, make foreign remittances, or take out a loan at any time of the day. Foreign remittance is especially popular as Kakao Bank charges 90% lower on fees for this service than several commercial banks.[14]

One Year After the Anti-Graft Law

Sept 28 marks one year since the implementation of the Improper Solicitation and Graft Act. The Act places stringent financial limitations on honoraria, contributions, and discretionary spending in application to all public and some private institutions.

One impact of this change has been a decline in corporate card expenditures by 9% or KRW 44.8 billion (USD 38.9 million).[15] Since the Act was first implemented, the Anti-Corruption and Civil Rights Commission (ACRC) received 47,000 complaints of which the ACRC investigated 16,000 claims. The law is likely to undergo some future changes due to the administrative burden, overbearing regulation, and deflationary impact on certain commercial sectors.[16] 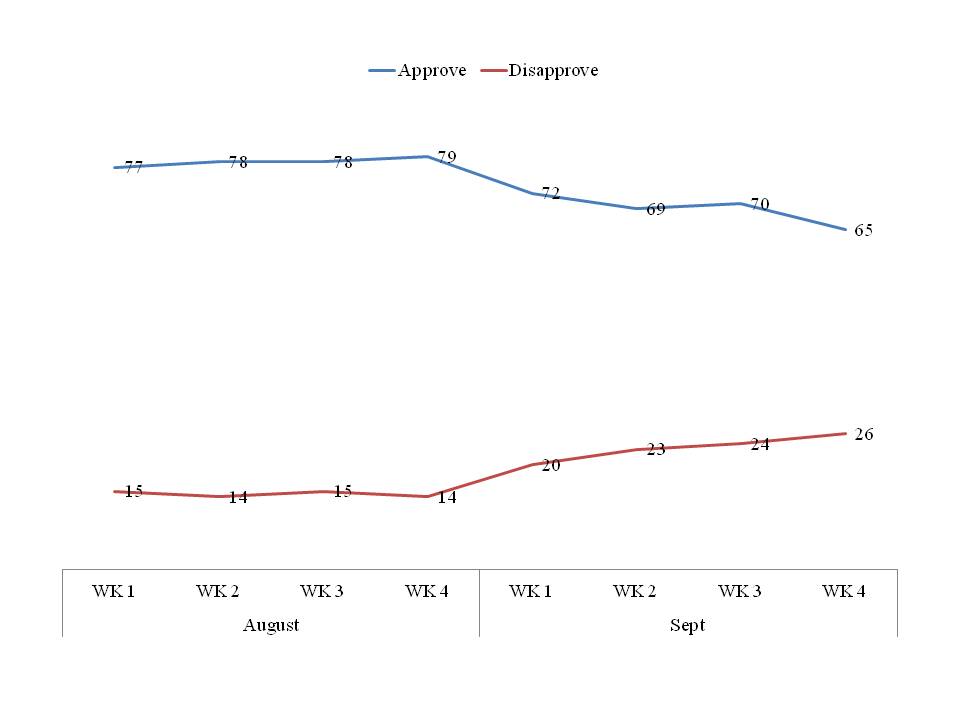