On July 31, the two Koreas held general-level military talks at the Panmunjom Peace House. The agenda included the demilitarization of the Joint Security Area and establishing peace zones along the DMZ and NLL.[1] The parties were unable to reach an agreement.[2]

The two sides, however, agreed to hold more high-level discussions, including another summit. The next high-level meeting is scheduled to take place on August 13, while the date of the inter-Korean summit still remains unclear.[3]

Investigators are looking into the shipment route. If the findings show that South Korea has consumed North Korean coal, it would be a clear violation of UN sanction 2371.[6] The government is under pressure from the opposition parties to expedite the investigation.[7]

The ASEAN Regional Forum was held during Aug 4~6 in Singapore. South Korean Foreign Minister Kang Kyung-wha, US Secretary of State Mike Pompeo, and the North Korean Foreign Minister Ri Yong-ho also attended the forum. While there was some speculation about the possibility of bilateral meetings, North Korea refused to hold such talks.[8] The ARF statement emphasizes the importance of “complete denuclearization” but experts questions whether this characterization implies verification.[9]

The latest data on President Moon’s approval shows that it is at 58%. This is the first time since inauguration that this figure has gone below 60%.[10] 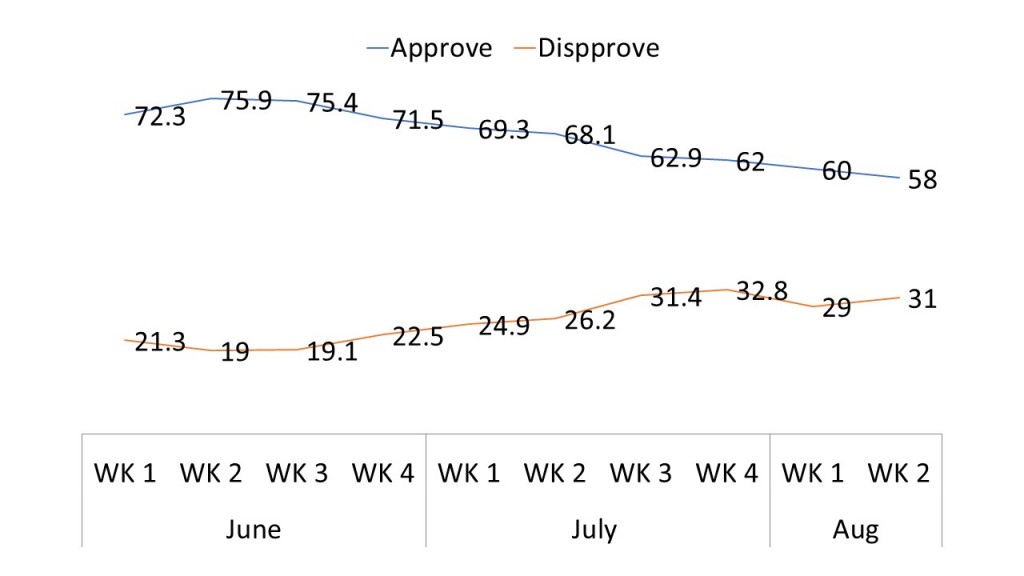 Dissolution of the Defense Security Command

On Aug 3, President Moon ordered the dismantlement of the Defense Security Command. He has also commissioned a task force to establish a new command structure.[11] Lt. Gen. Nam Young Shin was nominated as the head of the new organization. One key development is the restriction on the intelligence unit’s involvement in politics and surveillance of civilians. The new command will also slash 30% of the former DSC’s 4,200 members and cap the number of military officers in the unit to 70%.[12]

On Aug 9, Kim Dong-yeon, the Minister of Strategy and Finance (MoSF) and Deputy Prime Minister of Korea, announced that the public expenditure will increase substantially. Minister Kim identified that more than KRW 20 trillion (USD 17.8 billion) would be dedicated to research and development.[13] On Aug 8, the MoSF announced a plan to invest over KRW 7 trillion (USD 6.4 billion) in “regionally specific social overhead capital” following the directive by President Moon Jae-in. Distributed across different districts and regions, the project will support new national sports facilities, welfare facilities, and homeless shelters, among others.[14] On Jul 31, the government announced a 10-year, KRW 1.5 trillion (USD 1.34 billion) public investment in next-generation semiconductor development. Operated by the Ministry of Trade, Industry and Energy (MOTIE), the project aims to secure the semiconductor technology needed to advance the “fourth industrial revolution.”[15]

The FSS also expressed that it will begin monitoring stock brokerages more carefully following a string of phantom stock exchanges that have been attributed to human error. The most recent incident occurred on Aug 8, when an individual unloaded stocks of a company that did not exist.[17] On Jul 30, the FSS announced the investigation of lending practices of “savings banks”. 78.1% of low-credit borrowers from savings banks are paying an upward of 20% in annual interest. The FSS will begin investigation of 14 savings banks from September.[18]

On Aug 6, Minister Kim Dong-yeon met with JY Lee (Samsung Electronics) to discuss the matter of job creation, deregulation, and innovation-led economic growth. During the closed-door discussion, Lee indicated that deregulation was critical to incentivize innovation and efficiency. The biotech industry was specifically mentioned as one area of interest to Samsung. Minister Kim mentioned the need for strengthening corporate governance, fair trade, and youth job creation.[19]

On Aug 8, Samsung Electronics announced that it will move forward with the three-year plan to invest KRW 180 trillion (USD 161 billion) on 40,000 new jobs. The spillover benefit is expected to create an additional 700,000 jobs in the manufacturing sector.[20]

On Aug 3, the Minimum Wage Council reached the decision to raise the minimum wage to KRW 8,350 (USD 7.4). The Ministry of Employment and Labor will implement the wage increase at the start of 2019. Despite appeals by the Korea Employers Federation and Korea Federation of Small and Medium Business, there will be no graduated scheme according to the industry.[21]