“Everyone’s security is important, not just the (alliance-based) security of a few countries”; “Asian nations should fully support such initiatives as ‘One Belt, One Road’”; “Considering that the UK and other western countries have joined the AIIB, this is a great success. Following the Chinese example, if we can narrow our differences at the regional level through development, it will help us significantly as we tackle the issue of terrorism”; “China cannot become a regional leader only on the basis of its economic power. It needs a political instrument such as the CICA that has already been well established and is supported by Asian countries.” 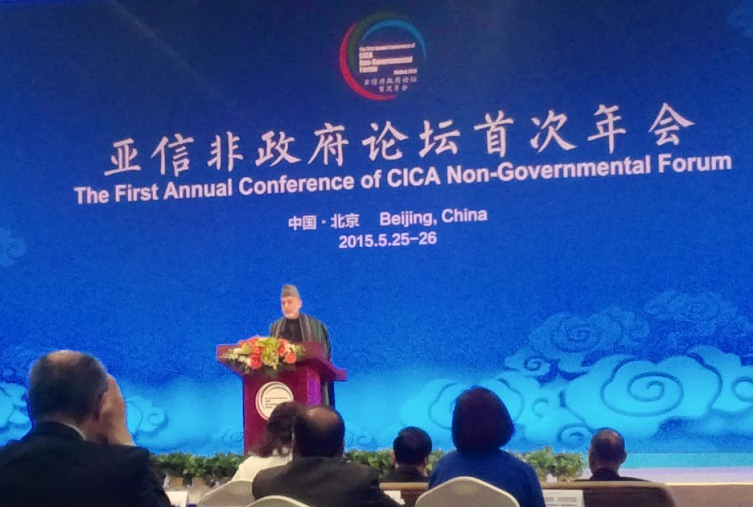 These remarks are those of former Afghan President Hamid Karzai (pictured left), former Israeli Prime Minister Ehud Barak, former Turkish Foreign Minister Yasar Yakis and others at the first round of the Non-Governmental Forum of the Conference on Interaction and Confidence Building Measures in Asia (CICA) which was held this May 25-26 in Beijing. The conference was full of praise for China. Foreign participants, without exception, spoke of successful cooperation between China and their respective countries or regions, while also touching upon future developments. In turn, Chinese participants emphasized the need for strengthened cooperation.

The CICA Non-Governmental Forum was proposed by Chinese President Xi Jinping at the 2014 CICA summit and so the Chinese government prepared for it thoroughly. The event was attended by a host of luminaries. Yu Zhengsheng, current Chairman of the National Committee of the Chinese People’s Political Consultative Conference (CPPCC), delivered a keynote address that reaffirmed Xi’s security proposal. Also in attendance were four head-of-state level participants (from Afghanistan, Kazakhstan, Israel, and Pakistan) and four former foreign ministers (from Cambodia, Iran, Kyrgyzstan, and Turkey).

Participants discussed various topics including Asia’s financial future, development and security, the post-war international order, China’s “One Belt, One Road” initiative, energy security, counter-terrorism, the role of NGOs in developing Asia’s identity, as well as the role of the media in building trust. The main participating countries were from Central Asia, the Middle East, and Southwest Asia, whereas there were only a few Southeast and Northeast Asian participants. Notably, Korean and Japanese attendees were almost invisible.

At the 2014 CICA summit, President Xi had denounced US alliances in Asia as a relic of the Cold War, warning that such alliances threatened the security of other nations for the sake of a few. He proposed a “new Asian security architecture,” underscoring that Asian security issues should be solved by Asian nations themselves rewriting the US-led post-World War II security order. In presenting this new initiative, Xi invoked the keywords “common,” “comprehensive,” “cooperative,” and “sustainable security.”

This post-war order, linked by US military alliances and criticized by Xi, is often described as a hub-spoke system. Under this system, the United States serves as the hub while Asian nations with military ties to the former form the spokes. It is a system whose security is guaranteed by US military power.

However, the way China, a country that has criticized the United States, presented itself at the CICA forum left the impression that it was following the American example and attempting to create a Chinese-style hub-and-spoke system with the participating countries. In all fields of cooperation, the foreign delegates spoke of bilateral cooperation between their respective countries and China, with some even mentioning bilateral cooperation between China and their respective regions (Central Asia, the Middle East, Southwest Asia, etc.).

But none of what the Chinese delegates said conveyed the true spirit of multilateral cooperation, with China participating as an equal and with the same rights as any other member nation. It was the same for the foreign delegates, who spoke only of bilateral cooperation between China and the participating countries. Most of these partner countries are developing nations expecting support from China in material and other forms.

As China’s Marching Westward policy starts to gain momentum, Asia’s political, security, and economic systems are being reshuffled and a Chinese-style hub-and-spoke system is emerging.

With its massive economic and military power, China is becoming the undisputed hub. While member nations may speak of cooperation to receive various resources from China, they are merely turning into “spoke nations.” Accordingly, a hub-and-spoke system is developing where China stands at the center while countries to the west—in Central Asia, the Middle East, and Southwest Asia—are connected to it through bilateral ties.

Of course, there are some differences from the US hub-spoke system. The US system retains characteristics of Cold War-era military alliances, while the Chinese-style hub-spoke system reflects a post-Cold War era built on various intermediary ties such as non-traditional security issues, economic cooperation, and social and cultural exchanges.

In the Chinese-style hub-spoke system, the Asian Infrastructure Investment Bank (AIIB) is the bankroller. The proposed AIIB is welcome news for developing nations participating in the CICA, or spoke nations seeking to develop their infrastructure. The “One Belt, One Road” advocated by Beijing stems from China, and connects to an imaginary road linking the spoke nations, i.e. developing countries in Asia. Ultimately, the “blood” circulating in the Chinese system may be different, but its mechanism is no different from the American one.

Regarding China’s vision of reproducing the US-centered hub-and-spoke system in Asia, I think China should keep in mind two points. First, in pursuing its proposed new Asian security architecture based upon “multilateralism” and the notion of Asian security by Asian nations, it should avoid an irregular multilateralism where one particular country becomes the hub. Instead, the architectural framework should pursue actual multilateralism where all Asian countries participate as member nations on equal footing. Only by doing so will a new order be established that is different from the existing one denounced by Beijing.

Second, if China intends to establish its own hub-spoke system in Asia, it ought to fulfill the expectations of its role. Such a role does not stop at providing economic resources for spoke countries; it includes greater responsibilities. If China serves as the hub, it should become a model for other spoke nations to emulate. It should uphold appropriate standards for its legitimacy to be recognized by spoke nations.

In other words, a Chinese-style hub-and-spoke system will gain support as long as it provides for the common good in Asia. Indeed, considering China’s current level of economic power, such moves are welcome. But even an economic powerhouse should remember that it requires more than just financial funding to become a hub and retain its spokes.

(The Korean version of this article was originally published on June 18, 2015.)