From July 20-22, 2014 the Asan Institute for Policy Studies conducted a public opinion survey on public trust in institutions.

Of institutions included in the survey, the military experienced the largest decline. The National Assembly remained the least trusted institution.

The table below details changes in the confidence in individual institutions. April 15 results are from the survey conducted just one day before the sinking of the Sewol. All values represent mean scores on a zero to ten scale, with zero representing zero trust. 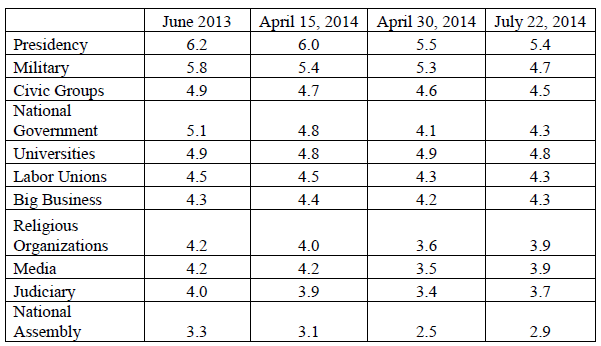 The largest change over the year was confidence in the military. While 46.3% cited confidence in it in June 2013 that fell to 28.4% in the most recent survey.

The national government also saw significant declines. While 34.9% cited confidence in it in June 2013, 24.3% stated the same on July 22.

The media has regained some confidence following its widely criticized coverage of the Sewol. Even so, just 16.9% now cite confidence in it, with 50.1% unconfident.

The National Assembly continues to be the least trusted institution included in the survey. Just 7.8% cited confidence in it. A plurality (26.8%) cited “zero” confidence.

Dr. Kim Jiyoon, Director of the Center for Public Opinion and Quantitative Research stated, “2014 has been difficult for both the Korean government and the public—the tragic sinking of the Sewol, the continued failure of high-ranking officials, and a soldier’s shooting rampage at the DMZ. All these events contributed to the decline of trust in the government and other institutions among the Korean public.”

The sample size of the survey was 1,000 people over the age of 19. The margin of error was ±3.1% at the 95% confidence level. The survey employed RDD for landline and mobile telephones.

The Asan Institute for Policy Studies is an independent think tank that provides innovative policy solutions and spearheads public discourse on the core issues in Korea, East Asia and the world. Our goal is to assist policymakers to make better informed and mutually beneficial policy decisions.

The Asan Institute, established in 2008, has successfully hosted a series of international conferences including the Asan Plenum, the Asan China Forum and the Asan Nuclear Forum. It has also published a number of books such as China’s Foreign Policy, Japan In Crisis, and The Arab Spring.