On Nov 2, South Korea’s navy discovered two North Korean fishermen near the NLL maritime border. The two men were suspected of killing 16 crew members before fleeing to South Korea.[1] During interrogation, the two men expressed their desire to defect, but the government refused to accept this request. The Ministry of Unification stated that “These men cannot be protected under the law and they could pose a threat to South Koreans.” Five days later, the government deported these two men back to North Korea.

There are conflicting reports about this incidence. The Minister of Unification, for instance, testified during a hearing that the two men stated their desire to return to North Korea. News reports, however, state that the two men demanded asylum. If the South Korean government repatriated these men against their will, this is in violation of the constitution and international law. 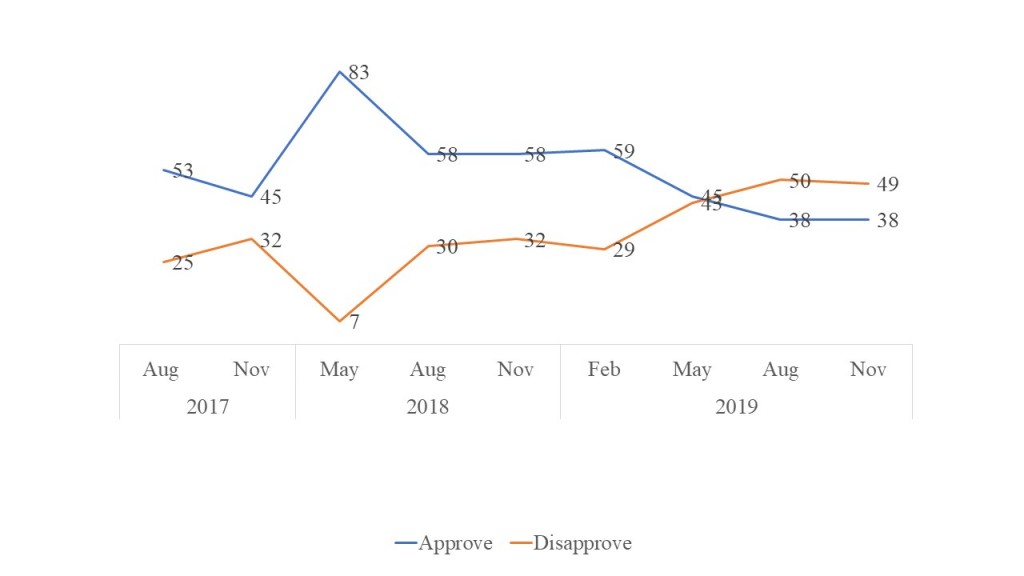 The opposition party criticized the government for rushing to repatriate these men back to North Korea. There is a suspicion that the government was more concerned about inter-Korean relations rather than the rights of these two men. The UN Office of the High Commissioner for Human Rights (OHCHR) voiced concern regarding the safety of these individuals, while Amnesty International described the incidence as a human rights violation.[3] The South Korean government refused to co-sponsor a UN resolution on human rights in North Korea, which was passed during the 74th General Assembly.[4]

Meanwhile, North Korea issued an ultimatum urging South Korea to dismantle the Mount Geumgang resort.[5] The government maintains that this issue should be resolved through an agreement between the two sides. North Korea did not specify the dismantlement date.

During the ASEAN+3 meeting, President Moon urged support for the upcoming S.Korea-ASEAN special summit meeting in Busan. He also emphasized enhancing the capacity of future generations, developing a sustainable community, and expanding connectivity in the region, including support for a Master Plan on ASEAN Connectivity (MPAC 2025).[6]

President Moon held an 11-minute sideline meeting with Japanese Prime Minister Abe.[7] It was the first one-on-one meeting between the two heads of state in 13 months. The two sides agreed on the importance of ROK-Japan relations and reaffirmed that the pending issues between the two countries should be resolved through dialogues. Moon also held a series of brief meetings with leaders of Indonesia, Vietnam, Cambodia, Laos, and Myanmar.

In the East Asia Summit, President Moon urged continued support for the Korean peace process, and discussed joint responses to illegal drugs, piracy, and cybercrimes, among others.

On Nov 5, David Stilwell, Assistant Secretary of State for the Bureau of East Asian and Pacific Affairs, visited Korea.

In a 70-minute meeting with the Deputy Director of National Security Kim Hyun Chong, Stilwell proposed extending or postponing the GSOMIA termination. Kim reiterated that South Korea’s position on GSOMIA remains unchanged and that Japan must lift the export controls.[8] James DeHart, the Senior Advisor for Security Negotiations and Agreements in the US Department of State’s Bureau of Political-Military Affairs, also arrived in Seoul.

On Nov 14~15, Secretary of Defense Mark Esper visited Seoul to attend the 51st Security Consultative Meeting (SCM).[9] He held a meeting with the South Korean Defense Minister to discuss burden-sharing and GSOMIA. During a press conference, Esper stated that South Korea should increase its contribution to the upcoming 11th Special Measures Agreement.[10]

Observers claim that pressuring South Korea to reconsider the termination of GSOMIA seems to be the main purpose of these visits by US officials. Experts in Seoul expressed concern about the possibility of the US linking GSOMIA with the SMA negotiation, leaving South Korea with little room to maneuver.

On Nov 11, South Korean Defense Ministry spokesperson Choi Hyun-soo said that the government would reconsider its decision to terminate GSOMIA if Japan removes its export controls. Director of the National Security Council (NSC) Chung Eui-yong also stated that the government is willing to consider extending GSOMIA if relations between the two countries are normalized.[11]

On Nov 12, Kumho Industrial Co. announced that the consortium consisting of Hyundai Development Company (HDC) and Mirae Asset Daewoo is the preferred bidder for Asiana Airlines. The HDC-Mirae Asset consortium has reportedly presented KRW 2.4~2.5 trillion for the 31 percent stake in Asiana Airlines, while its rival bidders, Aekyung-Stonebridge and KCGI-Banker Street, presented another offer amounting to approximately KRW 1.5~1.7 trillion.[12]

Hyundai Motor announced its decision to invest approximately KRW 1 trillion in Indonesia to build a manufacturing plant with an annual output capacity of 200,000 vehicles. Hyundai is banking on the likelihood that the Indonesian automotive industry will continue its robust growth. Car sales in Indonesia grew by 6.8 percent in 2019 compared to the previous year. Japanese brands like Toyota and Honda account for more than 90 percent of the country’s vehicle market.[13]

According to the recent data released by the Ministry of Economy and Finance (MoEF), South Korea recorded a debt of KRW 57 trillion between January and September. This is the highest debt for January~September since the MoEF began collecting such data in 2011. The country’s consolidated fiscal balance over the same period also posted a record deficit of KRW 26.5 trillion.[15] 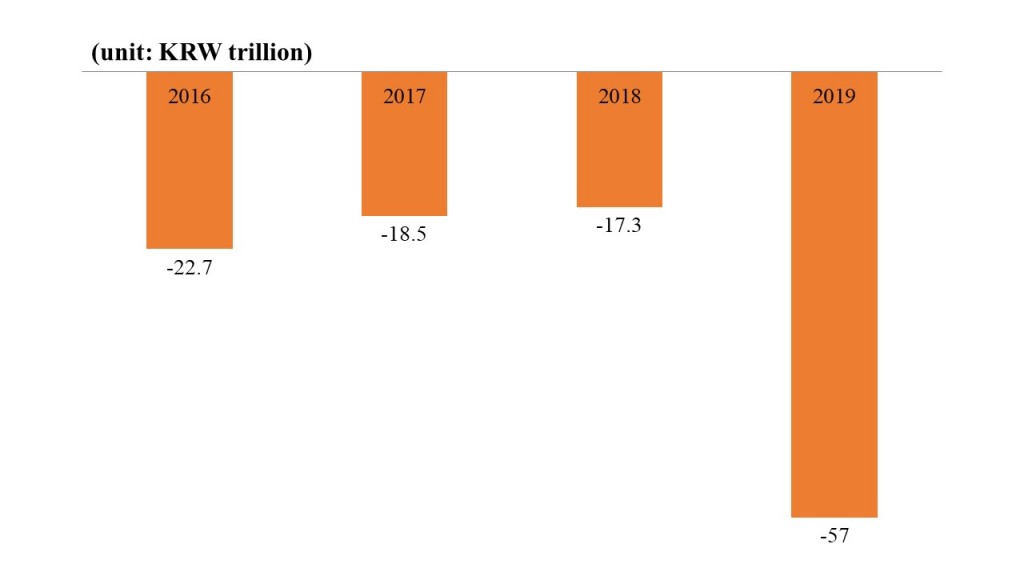