As always, Kim Jong Un delivered his new year address on Jan 1. The speech lasted for 30 minutes. The word ‘nuclear’ was mentioned only twice while “peace” and “economy” appeared 25 and 38 times, respectively.[1]

The South Korean media outlets highlighted several aspects to this year’s speech. First, Kim failed to mention his predecessors. Many in Seoul believe that this is an indication that Kim is now a firmly established leader in North Korea. There was also something unusual about the manner in which the speech was presented. Traditionally, North Korean leaders announce their speech standing at a podium in the Worker’s Party Conference Room. This year, however, the speech was delivered in a different manner. Kim was seen sitting on a sofa, relaxed, and wearing a Western-style suit. Analysts believe that Kim looks like a leader of a normal state.[2] Kim also refrained from making hostile comments against the US, but urged the US and South Korea to end joint military exercises and the deployment of US strategic assets.[3]

Kim also sent a two-page handwritten letter to President Moon expressing his desire to visit Seoul in 2019.[4] President Moon responded by posting a thank you note on Facebook.

Cho Sung-Kil, the North Korean diplomat who disappeared in November, allegedly requested asylum in the US. In a public letter to Cho, Thae Yong-ho urged Cho to defect to South Korea instead.[5] If the news of Cho’s defection to the US is true, some observers believe that this could negatively affect the US-North Korea relations.[6]

Moon also held a press conference in the second week of January.[8] Most of the media questions were focused on Moon’s economic policy, the recent political scandal surrounding government officials, and North Korea.[9] While Moon admitted that job growth was sluggish, he underlined some positive outcomes such as an increase in household income and youth employment. The media is contesting the facts regarding these statements. Although President Moon was willing to make some adjustments to his policies, he remained firm on his overall approach. Criticism towards President Moon was directed toward his recalcitrance.[10] On North Korea, Moon stated that lifting sanctions depends on the pace of the North Korean denuclearization process. He added that the details would be discussed during the second US-North Korea summit.

Meanwhile, the Minister of Unification Cho Myoung-Gyon stated that North Korean demands to end joint military exercises and remove US strategic assets differs from the South Korean perspective.[11] His remarks were interpreted by the South Korean media as contradicting Moon’s claim during the press conference.

From Jan 7-10, Kim Jong-un visited China where he met with Chinese leader Xi Jinping.[12] In a three day trip to Beijing, Kim discussed the second North Korea-US summit and sanctions relief. Korean observers also noted the timing of the visit, as it overlapped with the US trade delegation’s visit to China.[13]

The Korea Aerospace Industries (KAI) failed to win the KRW 250 billion contract for its KUH-1 Surion multirole helicopter to the Philippines Air Force. The Philippines Air Force decided to go with the US UH-60 Black Hawks. Sikorsky’s bidding appears to have influenced the decision. Sikorsky reportedly offered to provide 16 UH-60 Black Hawks at the price of 10 KUH-1 Surions.[14]

The Japanese Defense Ministry released a video clip of the P-1 patrol aircraft to support its claim that a South Korean naval destroyer directed the fire-control radar at the P-1. The footage includes the voice of Japanese crewmember but it did not reveal the radar frequency data. On Jan 4, the South Korean Ministry of National Defense (MND) disclosed video footage entitled “ROK MND’s position on the threatening low-altitude flight of the JMSDF patrol aircraft and false claims” about the radar. The ROK MND expressed deep regret about Tokyo’s release of the video just a day after a bilateral working-level meeting. “We reiterate the fact that the ROK Navy did not operate STIR against Japan’s patrol aircraft,” ROK MND spokeswoman Choi Hyun-soo said. Seoul also demanded Tokyo to apologize for conducting a threatening low-altitude flight toward its naval vessel during a humanitarian operation to rescue a North Korean fishing boat in distress.[15]

Meanwhile, a South Korean district court has decided to freeze the local assets of Nippon Steel & Sumitomo Metal Corporation (NSSMC) for refusing to follow South Korean Supreme Court ruling last October to compensate four plaintiffs who were forced to work under Japan’s colonial rule. About 81,000 shares (worth about KRW 380 million) owned by the NSSMC in its Korea-based joint venture with South Korea’s POSCO are subject to seizure.[16] President Moon Jae-in stated on Jan 10 that Japan should take a “more humble” attitude toward its past and accused Japanese leaders of politicizing the forced labor issue.[17]

On Jan 9, Korea Statistics (KOSTAT) released the ‘Economically Active Population Survey in December 2018.’ According to the latest report, the number of employed persons rose by 97,000 in fiscal 2018. This marks the lowest increase since the 2009 financial crisis. The overall unemployment rate for last year has hit a record high (3.8 percent) since 2001 (4 percent). The number of unemployed persons totaled 1.07 million in 2018, the highest since the Asian Financial Crisis of the late 1990s. Experts see the restructuring in the manufacturing sector and the rapid increase in the minimum wage as the main causes for the disappointing job figures.[18] 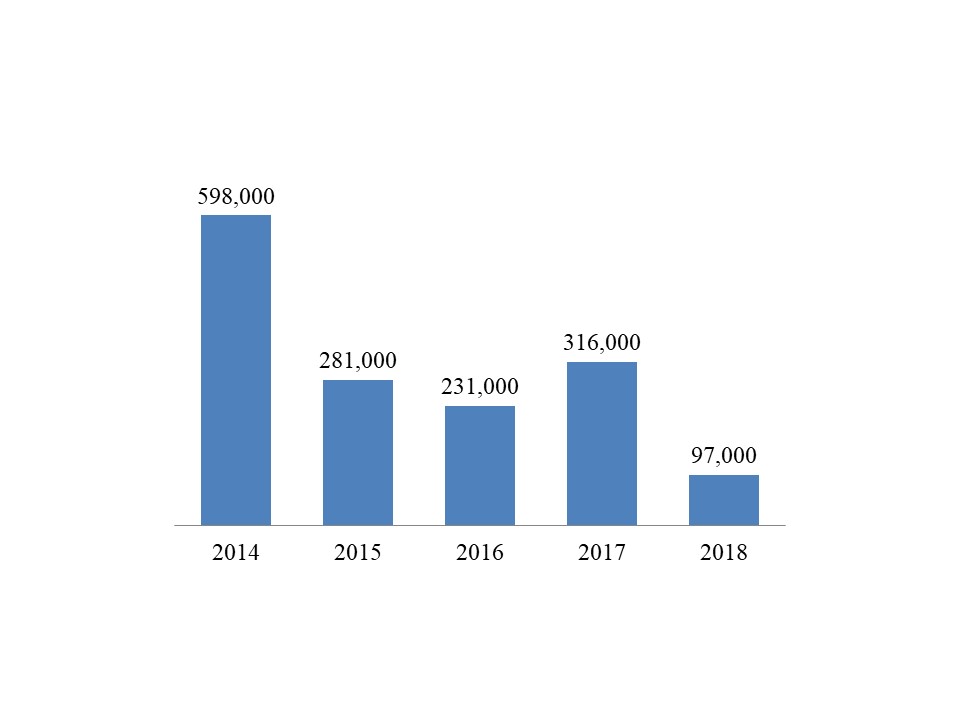 South Korea’s overall housing prices in 2019 are expected to fall by 1.0 percent, compared to the previous year, according to the report released by the Korea Appraisal Board (KAB) on Jan 9. This is the first time that the KAB has forecasted the decline of housing prices since 2014. The KAB said that an increase in housing supply and the government’s newly enforced regulations on new home purchases are likely to affect the downturn in prices this year.[19]