The Blue House welcomed renewed engagement between the US and North Korea. Although some viewed the recent development as a positive sign, others expressed concerns that President Trump may be willing to make considerable concessions to North Korea. Experts believe that Kim has the advantage in the next summit. Some pointed out that concessions from the US side could include lifting sanctions and signing the end of war declaration in exchange for a de facto freeze on the North Korean nuclear program.[4] Others argued that President Trump may ignore denuclearization and focus on ICBM instead, which he believes is a primary security concern for the US.[5]

In the meantime, Special Representative Lee Do-hoon exchanged telephone conversation with his US counterpart on Jan 15 and 17. Biegun explained the details of the Washington visit and agreed to coordinate the next steps with the ROK.[6] Lee also met with the Chinese Vice Foreign Minister Kong Xuanyou to discuss Kim Jong Un’s recent visit to China.[7]

On Jan 21, Foreign Minister Kang Kyung-wha exchanged a phone conversation with US Secretary of State Mike Pompeo and discussed the outcome of Kim Yong Chol’s visit as well as the upcoming US-DPRK summit.[8]

South Korea and the US are still at loggerheads over the defense cost-sharing agreement. Reports suggest that the US demanded $1.2 billion from South Korea which the Blue House deemed unacceptable. On Jan 22, the South Korean media outlets reported that Ambassador Harry Harris conveyed President Trumps’ final offer of $1 billion in defense costs to the South Korean National Security Advisor Chung Eui Yong and the Blue House.[9] Chung proposed $999.9 million as a counteroffer, but it was struck down. The Blue House position is that the South Korean contribution must remain below KRW 1 trillion since exceeding this amount would be politically difficult.[10] The US proposal also includes changing the term period of this agreement from five years to one year. South Korean government hopes to conclude the negotiation before the second US-DPRK summit, but narrowing the difference appears to be difficult. Many observers in Seoul argue that the proposed level of increase in South Korean contribution to defense cost sharing is unprecedented. Experts claim that this could be a symptom of weakening ROK-US alliance. Others went further to argue that if the issue remains unresolved, President Trump could use the reduction of joint military exercises and US troops as leverage for negotiations with North Korea during the second summit.[11]

On Jan 15, President Moon Jae-in invited C-level executives from major corporations to the Blue House for an event called ‘Dialogue with Business Leaders 2019.’[12] President Moon urged the leaders to increase investment in new industries and technology for future growth while also expressing his willingness to support innovation. Those attending the event included heads of Samsung, SK, LG, Lotte, Hyundai Motors, and Posco.

Former South Korean Chief Justice of the Supreme Court Yang Sung-tae was arrested on Jan 24.[13] Yang is facing 40 charges related to abuse of judicial power during his time as Chief Justice from 2011 to 2018.[14] Many observers believe that this incident undermines the confidence of the South Korean judicial branch.

On Jan 14, South Korean and Japanese military officials held a working-level meeting in Singapore to address the ongoing radar dispute between the two countries. During the talks, the South Korean side proposed a mutual expert verification of Japan’s military radar; however, the Japanese delegation rejected this offer according to the ROK Ministry of Defense.[15] On Jan 21, the Japanese Defense Ministry released an audio file of the radar alert as decisive evidence to support its claim that a South Korean naval destroyer directed its fire-control radar at the Japanese P-1 patrol aircraft in Dec 2018, and announced that it will cancel upcoming working-level talks with South Korea over the radar dispute. In response, Seoul expressed “deep regret” over Tokyo’s disclosure of the audio clip and its decision to end bilateral working-level talks on the radar dispute.[16]

Meanwhile, tension between Seoul and Tokyo have continued to escalate. According to the ROK Joint Chief of Staff, a Japanese P-3 aircraft flew at an altitude of 60 to 70 meters as close as 540 meters away from a South Korean naval warship on Jan 24. This is the third such incident over the last six days, with previous incidents occurring on Jan 18 and 23.[17]

Meanwhile, South Korea’s 2018 Defense White Paper published by the Defense Ministry on Jan 15 reflects changes in the bilateral relationship between South Korea and Japan. The phrase that the two countries “share the basic values of liberal democracy and market economy,” which appeared in the 2016 White Paper, was eliminated from this year’s version. The paper also gives higher priority to security cooperation with China over Japan.[18]

According to the report released by the Bank of Korea (BoK) on Jan 22, South
Korea’s GDP increased by 2.7 percent during 2018, the slowest pace in six years. Experts attributed the disappointing figure to the negative growth in the country’s investments in construction (-4.0 percent) and facilities (-1.7 percent). The blow to construction and facilities was cushioned by increased government spending (+5.6 percent), which is the highest in eleven years. Private consumption also expanded by 2.8 percent and exports grew by 4.0 percent.[19]

On Jan 24, the BoK’s Monetary Policy Board decided to keep the base rate unchanged at 1.75 percent, amid increasing concern over the struggling economy.[20] 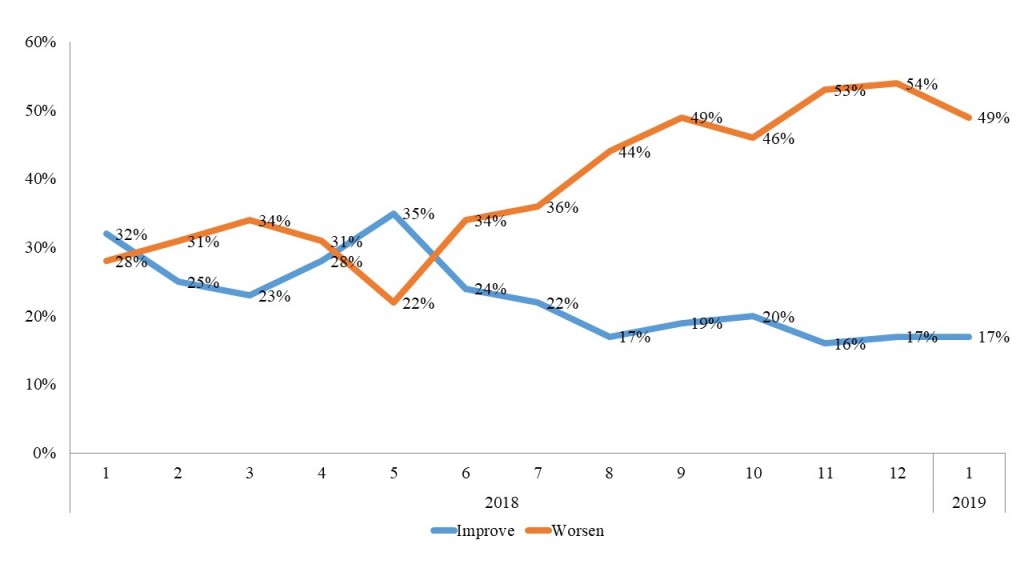 On Jan 16, the National Pension Service (NPS) Fund Management Committee held its first meeting of the year. In the meeting, the Committee decided to have its sub-committee discuss whether and to what extent the NPS should use its shareholder rights in the management of Korean Air and its holding company Hanjin KAL.[22] The NPS is the second largest shareholder of Korean Air with an 11.56 percent stake and the third largest shareholder of Hanjin KAL with a 7.34 percent.[23] The stewardship expert committee held a meeting on Jan 23 where the majority of committee members voted against the NPS actively exercising its new stewardship code introduced during July 2018. The Fund Management Committee will review the report of the stewardship expert committee and make a final decision no later than next month. Meanwhile, President Moon, in a Fair Economy Strategy Meeting on Jan 23, said that the NPS should actively exercise its stewardship code to correct improper management practices.[24]