The Special Representative for North Korea Stephen Biegun visited Seoul for a working group meeting during Dec 19~21. Biegun mentioned the possibility of reviewing restrictions on humanitarian assistance to North Korea. Biegun also visited Panmunjom but he also stated that the US has no intention of easing sanctions. These moves were interpreted by the South Korean media as a goodwill gesture by the US to bargain with North Korea in good faith.

On Dec 26, the groundbreaking ceremony for the inter-Korean railway was held in Panmun station, Kaesong. One hundred people including the Minister of Land, Infrastructure and Transport, Minister of Unification,  leader of the Together Democratic Party (TDP), and the Chinese ambassador to Korea boarded the train that departed Seoul station. One hundred people also attended the ceremony from the North Korean side including Unification Committee Chief Ri Sun-kwon.

South Korea’s leading opposition Liberty Korea Party (LKP) members did not attend the ceremony. Protests opposing the connection of inter-Korean railways also took place in Seoul.[1] While some believe that the ceremony has symbolic significance, others claim that it is a political ploy.

On Dec 26, the prosecutor searched the Office of the Secretary of Anti-Corruption and Special Inspector Office at the Blue House following the LKP accusation that the Chief Presidential Secretary Im Jong-seok and Senior Presidential Secretary for Civil Affairs Cho Kuk conducted surveillance against civilians without proper warrants.[4] The case was first raised by a former investigator Kim Tae Woo who was also part of the special inspection team at the Blue House. Kim claims that he was given orders to investigate civilians while working at the Blue House. The Blue House argues that Kim is solely responsible for the alleged illegal surveillance. The Blue House also filed charges against Kim for leaking official secrets to the media.[5] The LKP urged Im and Cho to attend the House Steering Committee hearing at the National Assembly. President Moon’s approval continued its downward slide. 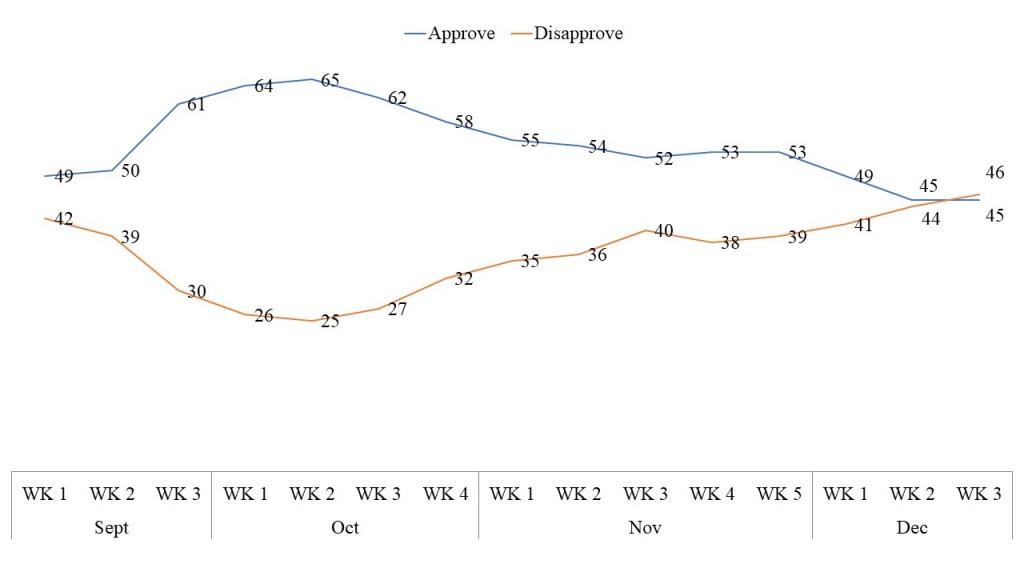 Japanese Defense Minister Iwaya Takeshi claimed on Dec 21 that a South Korea’s Gwanggaeto-daewang class destroyer directed a fire-control radar at a patrol aircraft (P-1) of the Japan’s Maritime Self-Defense Force (MSDF) off the coast of the Noto Peninsula on Dec 20 at around 15:00. Tokyo expressed deep regret and requested an explanation.[7] South Korea, however, denied the Japanese claim that its destroyer targeted the MSDF’s P-1 aircraft. According to officials from the South Korean Ministry of Defense, the destroyer used only the MW-08 radar to search for a North Korean fishing boat in distress, and never turned on its fire-control radar, the Signal Tracking and Illumination Radar (STIR) 180, as Japan had claimed. The destroyer launched the Electro-Optical Tracking System (EOTS) attached to the STIR 180 to identify a Japanese P-1 aircraft flying at a low altitude over the vessel. The STIR 180 antenna would move when EOTS was aimed at the MSDF’s P-1 aircraft for identification, but the STIR 180 did not emit any radio waves, the South Korean military explained.[8] At a director-level meeting on Dec 24, the South Korean Foreign Ministry expressed strong regret that Tokyo made its own claim to the media without proper factfinding.[9]

The South Korean Joint Chiefs of Staff announced that a Chinese military aircraft entered the South Korean Air Defense Identification Zone (KADIZ) on Dec 27. It first flew into KADIZ from northwest of Jeju Island at 10:21 and entered the Japan Air Defense Identification Zone (JADIZ) at 10:51. It then re-entered KADIZ at 11:54 and exited the zone at around 15:00. This is the eighth such incursion this year. The South Korean Air Force responded by scrambling fighter jets, including the F-15K.[10]

The National Pension Service (NPS) stated on Dec 28 that its investment returns in the Jan~Oct period was -0.57 percent. This is due to poor performance of the domestic stock market which makes up about 17 percent of the fund’s investment portfolio. The fund’s return from domestic stock investments was -16.57 percent. The benchmark Korea Composite Stock Price Index (KOSPI) plunged 17.7 percent as of the end of Oct. The fund earned a return of 1.64 percent from overseas stocks, 3.47 percent from domestic bonds, and 4.53 percent from overseas bonds. It also raked in a return of 7.57 percent from alternative investments. The fund’s cumulative investment return has sustained its annual average rate of 5.30 percent as of the end of Oct, since its inception in 1988.[11]

On Dec 17, the government lowered the country’s growth estimate for 2019 at around 2.6 percent to 2.7 percent from its previous forecast of 2.8 percent. The LG Economic Research Institute and Hyundai Research Institute forecasted the country’s growth forecast for 2019 at 2.5 percent. Experts see a lack of corporate investments and the global economic slowdown as the main reasons for the downgraded outlook.[13]

Of the 18 countries surveyed by Gallup International during October~December of this year, South Korea showed the lowest rate of optimism (11%) and the second highest rate of pessimism (41%).