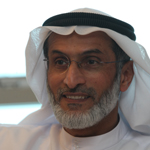 Maj. Gen. Al Bu-Ainnain (Ret.) is former commander of the UAE Air Force and Air Defense (UAEAF&AD). During his 32-year career with the UAEAF&AD he held numerous staff and command positions, and participated in both Gulf Wars. He initiated, led, and managed several multi-billion dollar programs for the UAE government and military, including having extensive leadership roles in: aircraft and systems acquisition programs; advanced information technologies and IT security programs; remote-sensing and space programs; and digital war gaming and simulation centers. Over the course of his career, Gen. Khalid has received 25 awards and decorations from the UAE and foreign governments. He retired from the UAEAF&AD in early 2006, and became a shareholder and president of INEGMA in November 2007. He is currently the chairman of his own business group called Baynuna Group, headquartred in Abu Dhabi. He is a known speaker in national and international conferences and seminars on issues relating to air power, air defense, regional security, and defense strategy.