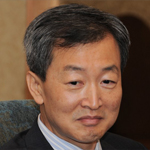 Former Vice Minister, Ministry of Foreign Affairs, Republic of Korea
How is the G-20 Dealing with Disorder?

Mr. Ahn is a career diplomat, having most recently served as Vice Minister at the Ministry of Foreign Affairs and Trade (MOFAT). He was previously Korea’s Ambassador to Belgium. In 2008, he served as the president’s Sherpa for the G-20 and G-8 Outreach Meetings. Mr. Ahn has served as Deputy Minister for Trade, as director-general of the Multilateral Trade Bureau at MOFAT, and as a counsellor at Korea’s permanent mission to the United Nations. He received a B.A. in international relations from Seoul National University and an M.S. in Foreign Service from Georgetown University.