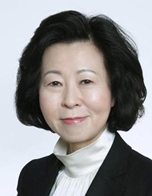 Professor Fukagawa Yukiko is currently the deputy dean and professor at the School of Political Science and Economics of Waseda University. Her major interest lies in economic development in East Asia, especially Korea. She worked for the Japan External Trade Organization (JETRO) and Long-Term Credit Bank Research Institute (LTCBR) before joining the faculty of Aoyama Gakuin University and the University of Tokyo. Prof. Fukagawa came back to Waseda University in 2006. She engaged in many consultation and advisory activities for the government, such as the Committee for Industrial Structure in the Ministry of Economy and Industry etc. Her recent publications include Economic Development in East Asia (Minerva, 2017), co-edited with Fumiyasu Mieno; Japan’s Future International Cooperation (Nihon Hyoronsha, 2015) and Beyond “Abenomics”: Japan’s integration catch-up and prospects for Japan-UK cooperation (forthcoming). After her undergraduate program at Waseda University, Prof. Fukagawa received her M.A. in international development economics at Yale University, and her Ph.D. at Waseda Graduate School of Business Studies.