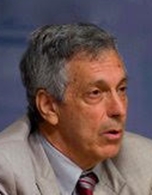 Editor-in-Chief, The Asan Forum
Session 2 - "Is Democracy in Crisis?"

Professor Gilbert Rozman is the editor-in-chief of The Asan Forum. Previously, he taught at Princeton University from 1970 to 2013, from which he retired as the Emeritus Musgrave Professor of Sociology. He currently also serves as the editor of the annual volume of academic studies of the Korean Economic Institute, which draws on four panels, some at the International Studies Association annual meetings. Prof. Rozman began Korean studies as a visiting professor in 2000 at Yonsei University, continuing as a visiting professor in 2005 at Seoul National University. He works in Washington, DC, where he reports on ongoing think tank meetings. He specializes on northeast Asia, having built a foundation through the Critical Languages Program junior year at Princeton, an independent study major in Chinese and Russian studies at Carleton College, and a doctoral dissertation at Princeton comparing China and Japan.