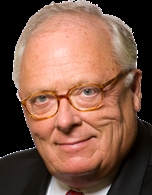 Dr. Edwin J. Feulner is founder and former president of The Heritage Foundation. Dr. Feulner’s vision and leadership transformed the think tank from a small policy shop into America’s powerhouse of conservative ideas and what the New York Times calls “the Parthenon of the conservative metropolis.” After serving as president from 1977 to 2013, Dr. Feulner served as president again for a brief period in 2017. Heritage’s influence grew immensely that year. After President Donald J. Trump’s inauguration, there were a number of conservative policy victories, most notably tax reform, and The Heritage Foundation played a role in all of them. Dr. Feulner graduated from Regis University with double majors in English and business, and received an MBA from the University of Pennsylvania’s Wharton School of Business in 1964. He later attended Georgetown University and the London School of Economics, and then earned a doctorate degree at the University of Edinburgh in 1981.