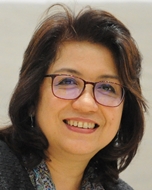 Professor Mely Caballero-Anthony is professor of international relations and head of the Centre for Non-Traditional Security (NTS) Studies at the S. Rajaratnam School of International Studies (RSIS), Nanyang Technological University, Singapore. She is currently the secretary-general of the Consortium on Non-Traditional Security Studies in Asia. From 2013-2017, Prof. Anthony was a member of the UN Secretary-General’s Advisory Board on Disarmament Matters (ABDM) and then its chair in 2016. She was director of external relations at the ASEAN Secretariat from 2011-2012. From 2015-2017, she was vice president at-large of the Governing Council of the International Studies Association (ISA). Prof. Anthony’s research interest includes regionalism and multilateralism in the Asia-Pacific, human security and non-traditional additional issues in the Asia-Pacific. She has published extensively in peer-reviewed journals and international news media. Her latest books include: Negotiating Governance on Non-Traditional Security in Southeast Asia and Beyond (New York: Columbia University Press, 2018).