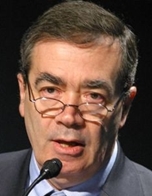 Professor Patrick Messerlin is Professor Emeritus of Economics at Sciences Po Paris, and chairman, Steering Committee ECIPE. He was visiting professor at the University of Houston, Simon Fraser University, Keio University, Johann Wolfgang Goethe Universität, and at the Graduate School of International Studies, Seoul National University. His current research deals with EU-East Asia economic and trade relations, with a particular focus on cultural industries. He was a senior economist at the World Bank (1986-1990) and a special advisor to Mike Moore, WTO director general (2001-2002). He served as co-chair, with Ernesto Zedillo (former President of Mexico and director of the Yale Center for the Study of Globalization), of the United Nations Millennium Development Goals Task Force on Trade for Development (2003-2005). He was a member of the Global Agenda Trade Council of the World Economic Forum (2009-2012). Prof. Messerlin received a Ph.D. in economics from the University of Paris.